Full Text
Big Cheese Across The Trail
____
Search for Another of the Vanished Ports of Lake Ontario Encounters Obstacle That Took 24 Horses, one Schooner, one Canal Boat, Old Hickory, and the Rochester Fire Brigade to Remove
_____
Schooner Days No. 720
By C.H.J. Snider

Once upon a time, you will learn when you read far enough, there was a cheese, an enthusiastic cheese. Col. Thomas S. Meacham made it, and the cheese inherited is enthusiasm from him. Col. Meacham lived on the Salt Road, in Sandy Creek Township; it doesn’t matter when or where. He was awkwardly described as “one of the kinda men who are called a great genius if they succeed and a lunatic if they fail.”

Real estate booms were in the air and Col. Meacham felt that the Salt Road and Sandy Creek deserved their share of appreciation, as the happy phrase puts it.

So he consulted with his herd of 150 dairy cattle and every last cow said “Moo,” and he set up in his own door yard a cheese hoop and press and proceeded to make a real big cheese. After he had turned the curd into the big cheese hoop a hundred pound cheese seemed a paltry effort for so mighty a township, so he raised his sights to a quarter of a ton. That didn’t look like do much either and he went to a 1,000-pounder. That was something like. While the going was good he kept adding curd and if the cows hadn’t used up all the summer pasture by the end of October he might have been going yet.

As it was, he, they, and the cheese kept on until there was evolved a cream drum or cylinder of 1,400 pounds weight avoirdupois, guaranteed to spring a mousetrap a mile away with one whiff. It was five times as big as the “monster” cartwheel Swiss cheeses which weigh 300 pounds, including the holes.

The cheese was so potent that it could have sped to Washington, D.C. on its own power, had the road thither been in better shape and all down hill. But Col Meacham provided a statelier ceremonial. He got 24 teams of fine grey horses, itched to one huge and highly decorated farm wagon, decorated with Stars and Stripes and the Red, White and Blue. On to the wagon the cheese was rolled up a ramp and on to the top of the cheese rolled Col. Meacham in his best beaver. And so on to the White House.

BY LAKE, CANAL AND RIVER

Not quite so fast. First there was a procession to Lake Ontario, led or followed by John Sage of Sandy Creek and all the farmers who had furnished grey horses, reinforced by every rustic in Oswego County who found find a democrat, wide-awake, spring wagon, heavy wagon, oxcart or baby carriage for himself and family. The mile long cavalcade moved from the Meacham farm through Fishville (which, despairing of the competition in aromatics, was renamed Pulaski, and is so called to this day) and then on to Port Ontario, or where Port Ontario was going to be, for the date of arrival at the lake side was Nov. 15, 1835, and Port Ontario subdivision of Richland Township was only sprung on the investor in 1836.

Here the mighty cheese was par-buckled aboard a schooner, the good ship’s mastheads bending in reverent salute, as the captain took the strain of the creaking tackles. The schooner might have been named the Binderola of Gorgonzola, or the Samson, or the Hercules. We are uncertain which, and to be perfectly honest will here admit that we do not know her name but hope to smell it out yet, such is our faith in the cheese she once carried.

Listing heavily to port with her precious burden of Col. Meacham and his cheese, and followed by a disappointed procession of field mice, dormice, muskrats, wear rats, albino rats and plain rats, that made the wear boil like a broaching school of herring, this Pied Piper plunged off for Oswego, her sails distended by a force more powerful than the fission of the atom. The embattled farmers on the shore applauded from their chariots “with shouts and clapping and noise of weeping loud” - for joy - and the old nine-pounder that may have done done in the Battle of Big Sandy blew his iron nose violently and often and everybody cheered like the Fourth of July, for the Monster Cheese of the World.

Wafted by favoring gales the Great Ungrated reached Oswego and was there transferred to a canal boat and the Oswego canal, and so on to Salina, Syracuse, Albany and New York, by the Erie Canal and Hudson River. Thence to the Potomac and at last to Washington.

Old Hickory Jackson was President then. He accepted the gift presented “in the name of the governor and people of New York,” gave Col. Meacham a dozen of wine and invitation to dinner at the White House and kept the cheese for itself. Till the following year. Old Hickory knew his cheeses, and that the riper they were the farther they went. On February 22nd he rolled it out for Washington’s birthday. Then he held open house. Probably in view of the accumulating excellence of the cheese, he had to. Citizens of Washington, the civil service, army, navy and police - had no riot squads or tear gas then - where haled to the White House to eat cheese on on that day by Presidential message.

Fourteen hundred pounds of well ripened cheese will by scientific computation cut into 376,480 penny-weights, thereby releasing gastronomic energy equivalent to sixteen billion mouse power. That many penny-weights or more were distributed throughout the nation and eaten in honor of George Washington, Oswego County, Sandy Creek Township, the Salt Road and Port Ontario, to and from which it led.

Those pungent pennyweights went far. Those that came to Rochester, N.Y., from the White House, were auctioned off to form a benefit fund for deserving firemen who could appreciate a nip of cheese while they were playing checkers in the firehouse. Fifty years afterwards the fund founded on the pennyweights had so grown by good administration - like the original cheese - that it show a reserve of thousands of dollars.

Of course the cheese was innocent of either such intention but it started or accentuated a real estate boom in New York State - and Schooner Days on the trail of Port Ontario, the place where the cheese was loaded and a good deal of real estate was unloaded long ago. As that trail promises to be a long one we shall belay and make all fast till next week. 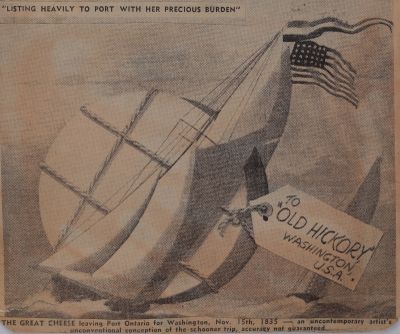