Montreal is the great commercial center of the Dominion of Canada. It is situated on the north side of the St. Lawrence River and is 625 miles from the Atlantic Ocean. It is the leading port for the Dominion and its greatest railroad center. Here the Canadian Pacific and the Grand Trunk Railways have their headquarters. These railroads tap the great grain and stock-raising areas of western Canada. The city is also connected by a number of railroads with the United States. Many steamship lines ply between Montreal and the Great Lake ports through canals that have been constructed about Niagara Falls. It is the 18th port of the world in importance. Its exports and imports together amounted in 1914 to $260,000,000. Its chief export is wheat.

The city lies along the northern bank of the St. Lawrence for some 7 miles. On the water front are great wharves and docks built of stone. The harbor is spacious and deep enough to admit large ocean-going steamers which dock here at high tide. Seven and one half miles of wharves have been constructed to take care of the extensive shipping of the city.

Montreal is a queer mixture of the old and the new. Its modern buildings are fine structures in keeping with its spirit of industry. But there are many buildings and spots to remind one of the city's history. Here in 1611 Champlain established a trading station. The village remained in the hands of the French until 1760, when it was captured by the English. In the Revolutionary War the city was captured by the Americans under General Montgomery. Its chief industries are flouring mills and sawmills. It also has many tanneries, breweries, glass and lead works. It manufactures locomotives, farm machinery, hardware, boots and shoes, sugar, and cigars. Montreal has a population of more than 470,000. 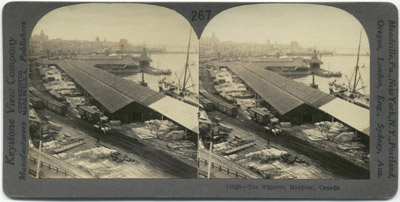