Having finished our exploring of the Devil’s Nose on the Friday the 13th mentioned, we looked for somewhere to hole up for the night, before getting a snort from his nostrils that might lay us flat. The glassy calm which had permitted the exploring could not last forever. It looked like wind from the northward. We had come across Lake Ontario from Presq’lle, a long way, and it was about as far to Toronto, and both were on the far side of the lake.

So we steered for Olcott, N.Y. Summer fog promptly shut out the land but we had watched the compass and log and running time carefully and picked up the picnic bush and the water tank at right time and so got in.

Fearing wind from the north might make the hospitable guest-buoys of the Olcott Yacht Club untenable we wormed our way through the crowded fleet to the bridge and the head of the harbor. The north wind came as presaged and soon the guest moorings were like the open lake and even craft inside them plunged up and down at short tether like rocking horses, but we were shut at the bridge and had a good night.

Next morning early we had a ticklish exit to make, for the vicinity of the bridge was packed like a sardine can and there was a brisk little tide running in and out under the bridge like a fever chart. In fending off while threading the maze one of our crew fell stern first through the curved glass window of neighboring launch. He wasn’t hurt - much - although he ate his meals thereafter seated on a life-ring. But the feelings of the launch owner were not unnaturally, and so were ours, and all we could do was to leave a card with Cap. Hedley, the Olcott marine man, to repair all damage and send on the bill. It cost $14.95 for that split-second window sitting.

We got off lightly. It cost an Ogdensburg, N.Y., steamship line $125,000 to get one of their steamers out of the mess the Devil’s Nose made of her when the officer of the watch fell asleep and let her go hard aground on the shoal at twelve knots one bright summer morning. John E. Proctor, J.P., of Brighton, Ont., lost the old “barque” Malta, the last Ontario vessel to spread studding-sails, on the Devil’s Nose about 1878. It was in a snowstorm. She went to pieces. Even the direction-finding equipment of the last war could not keep lake war patrols from stranding on this ship-trap.

A hundred and fifty years ago the Devil’s Nose had a name and a bad one as a place of ship.

“A vessel supposed to be the Genesee schooner,” reported the Niagara Constellation, Dec. 7, 1799, “has been two days endeavoring to come in. This vessel, which sailed more than a month ago from Oswego laden for this place has been several times in sight and driven back by heavy gales.”

The outcome? What you would expect from five weeks’ beating about on a voyage of 130 miles. She was sold by the Sheriff of York, Alexander McDonell, “by virtue of a writ of fieri facias, at the suit of Peter Vanalstine, against the goods and chattels of Abner Miles ….taken in execution, one third share of the schooner Jemima or Genesee Packet, as belonging to the said Abner Miles.”

Abner kept the Royal York of the time in the infant capital, on King street east, near Sherbourne, in the heart of the old town, with a general store which sold dry goods, wet goods - meaning wines, brandies everything but whiskey - lumber, leather, books, stationery and groceries. He was probably awaiting his winter’s supply in the Genesee Packet while she beat about off Niagara.

This vessel was said to be the first American schooner built on the lakes after the Revolution. The British kept a grip on the American forts of Oswego, Niagara and Miami, Detroit an Michilimackinac until 1796, and so strangled American lake commerce. In 1797 the controlling forts being given up, the Jemima, of thirty tons, probably 45 feet long, was built by Eli Granger at Hanford’s Landing, or Carthage, on the Genesee River, and became known as the Genesee or Genesee Packet.

York business men soon were part owners of the new American vessels for the advantage of the transport they offered. Another American schooner, the Jane, of Genesee, soon became the Peggy (or vice versa) for apparently the same reason. In this stormy month of December, in the same issue of the Constellation, one half of the Peggy was offered for sale by the estate of Thomas Berry, merchant, late of Work. “One misty of the well-known schooner Peggy; any recommendation of her sailing or accommodation will be unnecessary.”

On Dec. 21, 1799, the Upper Canada Gazette said: “We hear from very good authority that the schooner York, Capt. Murray, has foundered and is cast upon the American shore, about fifty miles from Niagara, where the captain and men are encamped. Mr. Forsyth, one of the passengers, hired a boat to carry them to Kingston. Fears are entertained for the Terrahoga.”

The Constellation had given the story earlier; speaking of Nov. 29th: “A boat arrived here from Schenectady, which place she left on the 22nd of October. She passed the York, sticking on a rock off the Devil’s Nose. No prospect of getting her off. A small deck boat also, she reports, lately sprung a leak twelve miles distant from Oswego. The people on board, many of whom were passengers, were taken off by a vessel passing, when she instantly sank. Cargo all lost.”

Perhaps this was Mr. Forsyth’s rescued party. Joseph Forsyth, merchant was an enterprising traveller. He was an arrival in Niagara from Kingston on April 13th, 1793, in the lake’s earliest private merchantman, the schooner Lady Dorchester with a company of provincial bigwigs.

It has been claimed for the York, built at Niagara in 1792 and measuring 80 tons, that she was the first merchantman, but the Dorchester was launched five years before, in 1787, near Kingston. The York was probably fully named Duchess of York, after the consort of the King’s son, for whom the town was named in 1793. Capt. Charles Selleck, pioneer of Presqu’lle and in 1797 master of the schooner Lady Murray, was at one time master of the Duchess of York. He inserted an advertisement in the Constellation which suggests some unauthorized salvaging of the wreck:

“If Jonathan A. Pell will return and pay Capt. Selleck for the freight of the salt which he took from on board the Duchess of York without leave it will be thankfully received and no questions asked.”

Made The Picture Page

This wreck was so noteworthy that “an engraving” was published, illustrating it, and Capt. J.R. Van Cleve, who had gifts that way, bestowed his best watercolor drawing upon it for his memoirs. This shows a vessel with black upper works and red bottom and black mastheads, which was the fashion of the time. Her topmasts are gone and her foresail and mainsail, both with short gaffs, have been partly lowered, as is the jib. The state of her sails and the direction in which she lies along the shore suggest that she was running back for shelter in the Genesee River and scraped the skin off the infernal spout in trying to get out of the storm.

Her crew and passengers are in the surf at the base - should we say the nostril’s? - of the Devil’s Nose. Capt. Van Cleve’s likeness of the background proves that he himself had been ashore at the cliff. Apparently the York was carrying soldiers, for on shore are three figures in the tight red tunics and black cocked hats of such a regiment as the 8th King’s. In the bow of the wreck is the figure of a uniformed bluejacket. It is a spirited piece of drawing and coloring, one of the best in the book. 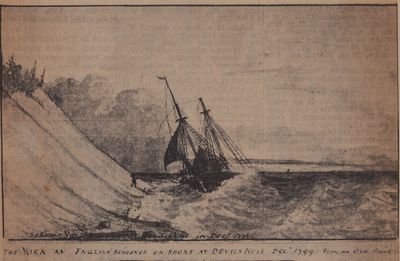