Being the conclusion of the whole matter regarding Liverpool Andy, pummy in stonehookers, whose existence was outlined in this column last week.

SPRING was ever the season for rejoicing in Liverpool Andy’s breast. Grease collection fell off with the warming of the Bay water, but it was replaced as a means of livelihood by the occasional voyage as pummy in the newly outfitted hookers.

Up or down the lake shore, in the primeval fastnesses of Petticoat Creek, Goose Point, or the Rouge Mouth, he might be able to pot enough game for his favorite feed, blackbird pie; or corn beef and cabbage, his second choice, would put flesh on his winter starved ribs.

Or if he chose not to tempt the unsalted deep but stuck to the sunny side of the waterfront, there was the happy-go-lucky chance of a meal and money for "throwing them out" when the stone-hookers arrived, swimming scupper-deep with square edged blue-grey builders, or granite hardheads with the bottom-grass still dripping from them like drowned women’s hair.

One May like this, Liverpool went up the lake as pummy in the old Hyanwyde, which few lakesmen will remember. The grub was not bad and the raking was good, and Liverpool Andy’s only regret was that he had left behind his boon companion, Billy the Carpenter.

Guillaume Le Charpentier was this worthy’s real name, as recorded in Quebec, where he was born, but, like Liverpool, he had gone waterfront early in his career, and forgotten more than his Norman accent. He was no hand with tools, but all along the front he was called The Carpenter, even by those who did not know his first name was Billy.

The Carpenter missed Andy, too. They had shivered winter nights through together in slab cars and hay wagons, and had shared the proceeds of sewer grease and blind-stabbing. But when Billy had discovered a single "site" in the Hyanwyde, he had remembered that Andy had not had a square meal since the fall before, and declared loudly he was through with making fortunes for other people and would never lift a set-pole or hardhead-rake again.

This was merely the waterfront way of politely saying "After you" when only one job was going. The Carpenter was speedily rewarded by being offered a berth in the Defiance by Fod and Bose McCraney, of Oakville, and, what was more to the point, half a dollar in advance.

The Strawberry Town mariners, old-timers in the stone trade, knew a hungry boy when they saw one. They good-heartedly sent The Carpenter off to get some food for himself and told him to report on board that night, for they meant to sail for home in the morning.

Billy the Carpenter tacked down Jarvis street in the general direction of the Defiance by the light of the May moon. The hooker nuzzled the splayed piling which raggedly outlined the slip below the gurgling sewer mouth. The Carpenter reached for her rigging to swing himself, aboard. The rigging was not where he thought it was. He fell. His head struck something. The slip water closed over him. He did not come up. He made hardly more splash than the hideous gas-bubbles which belched up as the circles of filthy water widened in the moonlight.

His body had been recovered and buried, or, as the Morgue record diplomatically put it, "disposed of," by the time Liverpool Andy returned in the Hyanwyde.

"Jeh hear ’bout The Carpenter?" the dockwallopers hailed, even while the Hyanwyde’s lines were being made fast.

Liverpool heard the grimy details without seeming to listen. When the Hyanwyde gang knocked off at noon he asked the Old Man for an advance on the pay that would be coming to him when the unloading was completed. Five cents would do. Five cents he got. Stonehooker captains encouraged moderation.

Liverpool shambled up dusty West Market street. The swing doors of the City Arms wafted an enticing aroma of beer and tobacco, but Liverpool, with his slack mouth watering, passed it by. He quaffed without enthusiasm at Morrison’s Bar, by which name Blake Mathews immortalized the market drinking fountain presented to the citizens of Toronto by Angus Morrison, Esq., M. P., in 1877, on the Queen’s Birthday, celebrating the second of his three terms as Mayor of Toronto. It stood on Front street then, near the public weigh scales; since moved a mile away, to the ferry wharves. Then he passed on to the flower stalls in St. Lawrence Market, which lay between the two streets. He emerged on Jarvis with a tiny terra-cotta pot in his gnarled young hands; in the pot, a geranium, flaming like a crimson torch amid its stout green brown-circled leaves.

He bore his prize back to the slip. One spile or mooring post, more upright than the rest, marked the vicinity of The Carpenter’s moon-lit disappearance. Like everything else around The Hospital, it was soft with reek and rot. There was a cavity in the top of it. Here Liverpool Andy planted his geranium pot; and on the spile he chalked:

He sailed back up the shore again next day in the Hyanwdye. To make two trips in succession in one hooker was a rare exhibition of industry on his part. With the skipper’s muzzle-loading shotgun he made great havoc among the blackbirds at the creek mouth, and much feasting on blackbird pie resulted.

It was night when they got back a week later, and again it was moonlight. Liverpool made some excuse about walking up the dock before turning in. He promised to be "right back." But he did not turn in. Neither, did he turn up.

The Hyanwyde skipper waited for his pummy, but not long. He went to bed grumbling about young night hawks. Next morning he found Liverpool Andy’s body floating in the slip; below a rotting spile, from whose top a gay geranium greeted

"THE HOSPITAL"-—-As Jarvis Street Slip Was Called In Stonehooker Times

Hookers in the slip in this picture are, in the left panel: the Hope, Rapid City and Maud S. In the right hand panel are the Hope, Wood Duck and Lillian, with the Madeline anchored out. All these were constant customers of "The Hospital" either for treatment or for delivery of their stone cargoes. Sandpump and concrete mixer have long since obliterated all traces of Jarvis street slip, and the waterfront has moved south to where the Madeline swings at anchor in the picture.

The photographs, taken in 1900, were kindly lent to The Telegram by Mr. George Hudson, 171 Concord avenue, an interested follower of "Schooner Days."

The spile which became Billy the Carpenter’s monument, and Liverpool Andy’s, too, was just out of focus, on the extreme left, but the sewer mouth may be seen, where, as told a week ago, Liverpool kept himself alive in the winters by skimming grease. 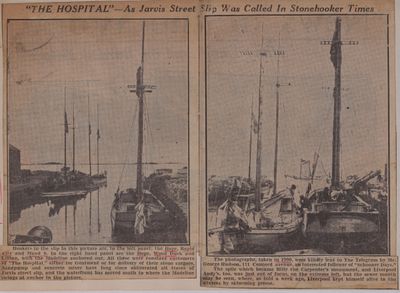