The Sea Gull of Oakville, whose sailing voyage to South Africa and return in 1865 was recently described in the Telegram, was a centre boarder. She was neither the only nor the first lake vessel to taste salt water. This picker-up of unconsidered trifles hesitates to say which was the first.

Yachtsmen who sail centerboarders on the ocean appear to divide their time between keeping them right side up and writing to the magazines about it. The ocean-going centerboard yacht is shapely and has permanent ballast. If her performance at sea merits sagas from skeely skippers, what should be done for the round-nosed., slab-sided, flat-floored, unballasted lake schooner which our fresh water captains took across the Atlantic and into the Mediterranean and to the Caribbean-yes, and around the Cape of Good Hope and stormy Cape Horn, in the brave days of old?

Next week we shall try to begin the record of the lakers that went abroad, and what befell them. All assistance welcome. If you have facts or pictures that may help, sent them in. For to-day let us consider something of the hallmark of the lake schooner, the centerboard, sometimes known as the "midship anchor."

The Red Star Line of Oswego schooners is said to have been the first to adopt the centerboard. They improved fast and handy, and much quicker in stays. The standing-kneelers were always slow in coming about and one of the functions of the square topsail which they usually carried was to force them around from tack to tack.

They turned "on their heels." but their heels were so long they were flat footed. The centerboarder, to continue the simile, pivoted on the ball of her toe.

The centerboard box was located just abaft the foremast. This was rather far forward in the vessel—especially if she was a 3 master-and was one of the reasons for lake schooner having such long nosepoles and jibbooms. They had to carry lots of head canvas since their point of pivoting was so far forward. Some of the three-masted schooners like the Stuart H. Dunn of Kingston and the Monarch of Oakville had two centre-boards, the second being in line with the first but set abaft the mainmast. This was an excellent arrangement, and cured many wild steering tendencies. Difficulties of balance could be adjusted by using the proper amount of either board.

Many of the small scow-shaped flat bottomed craft, which had to wriggle over creek-mouthed bars as at the Humber and Etobicoke, to pick up grist for the mill or grain for the brewery, or land their smuggled cargoes of tea or coal oil had been experimenting with centerboards long before the larger schooner adopted them. Some had lee-boards, set in frames and against their flat sides; others had centerboards on one side of the keelson, so that they fetched a point higher on one tack than on the other. Others had barn "doors."

It is impossible to realize, in these day of artificial harbors and channels, both dredged and concreted to required depth, what handicaps shifting lake levels and the natural obstacles of bars and shoals imposed upon early commerce.

An ancient journal tells how the Provincial Marine schooner Dunmore built in the 18th century with the old "standing keel," spent a week trying to get out of the St. Clair river into Lake Huron. She had about 600 yards of "rapid" to negotiate, that is, the river, in its natural state, flowed with a swift current at the entrance to the lake. Once she got aground, and to get off she had to unload several boatloads of flour; yet she was only drawing six feet of water. Then she had to wait for a wind strong enough to push her up the rapids; when she got up the weather in Lake Huron looked threatening, and she had to run back down the river, and and go through the bar-climbing performance all over again.

Capt. John Williams tells of two little Oakville vessels which went to Lake Erie for loads of corn. One was never heard of again. The other got into Black River, at the present town of Lorain, and loaded. A shift in the wind lowered the level of Lake Erie in the night, and the crew woke up in the morning to find their vessel mudded in on the river bottom like a stranded sawlog. They worked for a week with long-handled shovels digging her out.

In 1891 Captain Coote of Oakville, then mate of the schooner Albacore, told me, as we passed Charlotte on the south shore of Lake Ontario, that the bones of two schooners were mouldering in Irondequot Bay close by. They had gone in there thirty years before, in a storm for shelter, and had never come out. After the storm was over the wide mouth of the bay was all filled with a sandbar like Toronto Island.

From the Albacore's masthead I looked for this bay with the glasses and found it. Forty years later I visited it from the land. It is magnificent sheet of water, picturesque with wooded shores, and wide enough to anchor a navy. But it is a lake, not a bay. When I saw it a belt of land at least a hundred yards wide divided it from Lake Ontario. And somewhere among its lily pads lie the two schooners which there found permanent refuge from lake storms long ago.

Bound for Nova Scotia for delivery, Mr. G. Herrick Duggan’s ketch Glencairn put into Brockville last Sunday evening ere the northern lights began to flicker. Glencairn berthed beside a long grey hulk, straight and sharp as a razor blade. Her deck was piled to the height of the rail with her cargo of 750 tons of anthracite. Nothing else stood up in the long sweep of it, except a little house for a hoisting engine at the very stern. On the stern was painted the name Warrenko. Few Toronto residents will recognize this as the once palatial Chicora of Niagara excursion days, when she plied Lake Ontario on daylight and "moonlight" pleasure trips.

The Chicora was built at Liverpool by the Lairds, in 1864, to run the blockade of the ports of the Confederate States. In 1865, before the war closed, she made two trips between the Bahamas and Charleston, S.C. She was christened "Let-Her-Be," later contracted to "Letter B," and she was sister ship to the "Let-Her-Rip" and "Let-Her-Go." The brass bell which long adorned the wheel house had the name "Letter B" cut into it.

On her second trip to Charleston, under command of her owner, Captain George B. Boynton, she was under terrific fire from blockading Federal ships. Five of her crew were killed and she lost her mainmast. In 1868, having been renamed Chicora, she was brought to the lakes, and in 1870 she transported Garnet Wolseley’s troops from Collingwood. In 1874 she was chartered as a special yacht for the use of the Governor-General, Lord Dufferin, during a tour of the Upper Lakes, and in 1878 she was placed on a regular Toronto-Niagara run.

War service came in 1914 and for four years she carried troops and military supplies to Niagara-on-the-Lake. The last year of the war she was on the Olcutt route and in 1919 she was not in commission. While at her moorings at the foot of Cherry street she sprang a leak and sank -in 24 feet of water. This was Oct. 27, 1919.

A month later, after 12 days of effort by 32 men, she was raised, but could no longer be used in passenger service and was converted into a tow-barge, being rechristened Warrenko.

So this vessel, once so fast that no warship could keep pace with her, and which for 40 years was a passenger carrier on the lakes, finds her name, "Pretty Flower"—from the Southern Indian "Chicora"—smudged by the grime of her black cargo, but her history as a queen of the lakes remains unsullied. 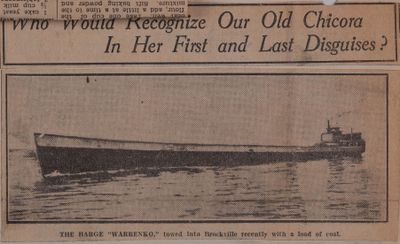 Letter B
Groups of Related Records