Creator
Bayfield, Henry W., Surveyor
Media Type
Image
Item Type
Charts
Description
The principal edits to the chart published in 1828 are the addition of place names and information on lights.
Inscriptions
A Survey of
Lake Erie;
in the Years 1817 & 1818
By
Lieu't Henry W. Bayfield, R. N.
By Lieut. Ashe's Electric determinations 1859, the Longitude of this Chart is about 5' too Westerly
Variation in 1860 decreasing in the Western part
increasing in the Eastern part 4' annually
All Soundings are in feet
N.B. The depth of water varies, according as the seasons are wet or dry; the maximum being from two to three feet.
---insets---
Survey of Put In Bay
and the Adjacent Islands
--
Survey of Miamis Bay
--
Sketch
of the Mouth of the
Cayanoga [Cuyahoga] River
The waters of this River are said to approach within 5 or 6 miles of the waters which descend into the Ohio, and are navigable for boats near thirty miles.
--
Sketch
of the Mouth of the
River Segnan [Chagrin]
by Lieut H. W. Bayfield, R. N.
The bar shifts with every breeze and the entrance is sometimes completely blocked up.
--
Sketch
of
Grand River
About 3 miles up this River there is a Village called Paynville [Painesville] to which it is said to be navigable for boats.
Bar sometimes shut by the waves
--
Survey
of Presqu'Isle Harbour,
The United States' Naval Depot

London Published according to Act of Parliament at the Hydrographical Office of the Admiralty, 19th May 1828. Corrections 1861
Sold by J. D. Potter Agency for the Admiralty Charts 31 Poultry & 11 King st. Tower Hill
J. & C. Walker Sculpt 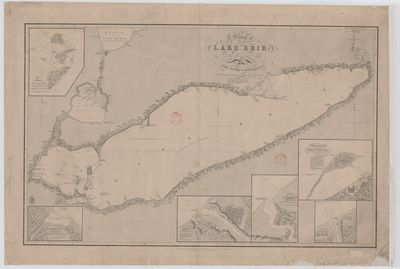