What the original "drogher" was Noah only knows. The name looks like an Irish one, but isn't. The word comes from our own Anglo-Saxon verb "drag." In the West Indies they call the little coasters that carry rum and sugar or package freight between local ports "droghers." Big Nova Scotian and New England coasters trading to the West Indies with fish and lumber and cotton are also known as "droghers." Here on the lakes we confined the term to sailing vessels in the lumber and timber trade. The word was used loosely, with that degree of familiarity which suggests slight contempt, as was the word "hooker." That, by the way, is a definite rig in Galway. On the lakes there were stonehookers; but never stone droghers, nor coal droghers, nor grain droghers. The timber trade was especially the preserve of the drogher. How she plied it is here set forth, largely in the words of brother Roy, whose sobriquet in the forecastles was "Doc," and who knows what he is talking about.

The drogher mate pounded lustily on the slide of the forescuttle, and his raucous cock-crow roused echoes in the spruce-tops ashore.

At the "wangan camp" or shanty scow moored in the creek mouth a burley boom boss gave the answering bellow:

"Daylight in the swamp! WHITE beans on tap! Frenchman in the BUNK! Ro-o-o-ll OUT!"

Despite his assertion, it was still dark with the stars hanging like blazing diamonds in the damask sky. Aboard the drogher the cook's stove and swinging lamp sent gleams of red and yellow from the galley. Breakfast had to be over by the time the first rosetints stained the east. Breakfast was but the first meal of six to be served that day and every day before the bone-weary drogher crew would turn in at 11 p. m. for four hours' sleep. Fifteen or eighteen hours work in twenty-four was the common lot while loading; $25 a month "and found" was their pay. Timber vessels were man-killers. So were their masters and mates; and they worked themselves harder than they did their crews.

After being pushed up the lakes from the St. Lawrence under a press of canvas the drogher entered one of the square-timber harbors "up above" and was moored fore-and-aft. Sometimes to anchors, sometimes to loading cribs, sometimes to a combination of both. "Up above" meant not the New Jerusalem but Georgian Bay, Lake Huron, Lake Superior, Green Bay or Lake Michigan. The havens of the Upper Lakes knew the timber droghers when there were no harbor works, no channel markers, no beacons nor range lights. To Manitoulin Island, Bayley's Bay, Grand Marais, Little Two Harbors, Echo River, Barrage Bay, Byng Inlet, Owen Sound, Tobermory with its "Big Tub" and "Little Tub, " and numberless other inlets, river mouths and bays, sometimes nameless, often lightless, the droghers winged their way through fogs and gales and headwinds like homing gulls.

Square or "waney-hewn" timber, and in later days, sawn timber, was rafted out to the anchored drogher, or vessel might be warped to a berth alongside a shore-anchored boom full of timber.

Her timber ports, huge doors hinged to the shape of her hull at bow or stern, were unbarred and sledged open. Fewer of the old timers had a pairs astern. One pair was in the taffrail, opening from the deck, and merely hooked fast when closed. The other pair, below these, was cut in the curve and shape of the vessel's run, on either side of the sternpost. They hung on hinges, and had to be caulked and payed with tallow when the loading process brought their sills close to the water's level. When loading was completed they were submerged up to the hinges at their heads. Within the vessel's hold wooden ramps, known as "brows," led from the portsills to the bottom, and down these the timber was skidded.

The loading start was made while yet the glow of the after-breakfast pipes shone red in the twilight of the dawn.

Whatever member of the drogher's crew was best fitted for the job worked on the boom with the longshore raftsmen. It might be the Old Man, or captain, himself, one of the mates, or one of the forward crowd who had timber sense. The droghers often had two mates. One of these always worked at the quills. Usually the second mate and the Old Man spelled each other in the hold, bossing the job of stowing. Caulk-booted raftsmen, skilfully plying long pike poles, shoved the floating timber to the slides. Men of the schooner's crew caught the big sticks with chain slings or tongs, and hooked in the quill falls. The slide-tender sang out "Quill up!"

Then the most important and least paid member of the drogher's complement worked his science. This was the horse boy.

In later days it was the better paid donkey-man, who operated a steam hoisting engine with upright boiler, parked forward of the fore-rigging. Before its advent on lake sailing vessels a team of horses constituted the major item of power equipment. The principal duty of the steeds was to load timber, and the principal duty of the horse boy was to make them do that and a great many other chores. The horses also helped "make canvas" or heave up the anchor, and they might be called on to tow the vessel through the canals. It is recorded that on more than one occasion the horses "bore a hand" at reefing such brutes as the Gleneiffer or Albatross or Albacore, heaving their sturdy bulk against the pull of the pennants when the earings had to be hauled out.

"Quill up! " came the call from the slide-tender.

The horseboy started his horses forward along the deck, or the donkey engine coughed and rattled. The quill tackle engaged. The stick of timber slowly slithered up the slide.

The power was shifted to the messenger, a stout length of chain or rope, and the stick of timber came forward along the deck or down the brow. Bulwark stanchions were protected by a heavy inboard waling, to prevent the square corners or butts of the sticks from catching. Men with sharp-pointed steel guides, or pig-yokes formed by canthooks crossed on the stick, eased the stick into its final position, and the cry, "Quill up!" echoed for the next victim.

Thus ceaselessly, until the hold was filled with sweating water-soaked timber, often so heavy that it had only been kept afloat by mingling cedar logs in the raft.

On a "horsepower" drogher, only a few sticks of the deck load were hauled aboard through the upper stern ports. Then their bulk cluttered the deck to a degree that precluded the driving of horses. The boy then hooked his team to the "yard arm" of a big wooden "horse capstan," and went 'round and 'round. The deck load was hoisted in over side.

When the deck load was stowed, wedged tight with dunnaging, and chained from rail to rail, the halliards were led under thumb cleats to the horse capstan or the winch and the donkey engine or the boy and his horses went 'round and 'round for another spell, making canvas. After that they worked on weighing anchor. Then the horses got their "watch below," which, paradoxically, they spent on the forward deck.

It was only when the drogher was under weigh that her crew had a respite. Sailing for them was a holiday. After working for a week with next to no sleep, and barely time off for their big meals, they regarded the routine of watch-and-watch, four hours on and four off, as a luxury. As soon as the anchors were railed, the whole crew, except the man at the wheel, would fling themselves down and sleep like the dead—the "watch on deck" upon the oozing deckload, the "watch below" in the damp straw of the forecastle. Only the man at the wheel stayed awake. But if it breezed up, all hands and the horses had to "rise and shine" at the yell of the helmsman—assisted by the cook's dippers of water and the boots the old Man, or whoever first came to.

So, drugged with sleepiness, stiff as the oak sticks they had loaded, and staunch and true as they, the drogher crew would work their round-bowed, slab-sided, square-sterned packet down the Great Lakes and the canals to the St. Lawrence and the sea. Sometimes they would "go across." Such a timber drogher was the Edward Blake, in which Commodore Aemilius Jarvis, S.S.D., made his first sea voyage, from Sheboygan to London. Such were scores of other lakers which made the ocean passage, leaking like street sprinklers through their caulked timber ports, but all coming back to leave their bones in fresh water.

But usually the droghers unloaded at Garden Island or Carleton Island in the St. Lawrence, where their drying cargoes were again immersed with much labor and bound into rafts, which floated on the river current down to the great timber towns at Quebec.

MALTA, typical barquentine-rigged drogher, built by Louis Shickluna at St. Catharines in 1853. She was one of the last of the lakers to sport topmast studding sails. 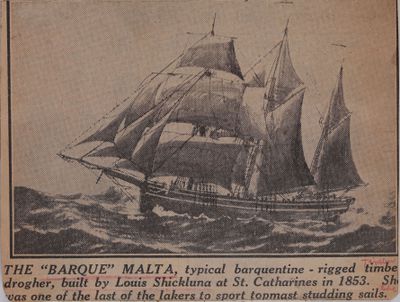