Writing from Burlington, "I. S. B. " mentions that it was stated some time ago in this column that the schooner Col. Cook was one which attempted the voyage to Europe from the lakes in 1858; and the Collingwood Enterprise-Bulletin said that the schooner Augusta, which sank the Lady Elgin, was at one time known as the Col. Cook. He asks if there was a connection; and an effort is made below to clarify the situation.

THERE were two Augustas and two Col. Cooks in the lake marine, and the distinguishing of them may be of interest.

The first Col. Cook was an American schooner of 327 tons register, commanded by a Capt. Humphrey, in 1858. In that year she left Detroit with a cargo of staves and lumber for Liverpool, but she was wrecked in the Gulf of St. Lawrence and became a total loss. This eliminates her from the picture as the wreck occurred two years before the Augusta-Lady Elgin collision.

The two masted schooner Augusta was built in Oswego, either by Baker or by James Navagh, for Thos. G. Avery and Co., of Chicago, in 1855. She registered 357 tons and was 126 feet on deck, 25 feet 6 inches beam, and 11 feet deep in the hold, calculated to carry 15,000 bushels of wheat through the Welland Canal on 9 feet draft, and to work in the lumber and timber trade.

It was while ploughing up Lake Michigan with a cargo of lumber for Chicago on the dark, stormy night of Sept. 8th, 1860 that the Augusta gored the Lady Elgin to death.

MALOTT, master of the plum stemmed, slabsided, long-homed fore-and-after, was a man of few words.

A tug was worming the lumber laden Augusta through the draw of old Twelfth street bridge, in Chicago, the following morning, and the bridge tender noticed that the schooner's headgear looked as though she had been in a dog fight.

"Dirty in the lake last night, Captain, " said he politely.

"I think I hit a steamer somewhere above Milwaukee, " said Malott and that was all.

At the moment Lake Michigan was fifty fathoms deep over two hundred and eighty-nine men, women and children who had been passengers in the steamer the Augusta "hit."

For his own peace of mind afterwards it is to be hoped that Malott did not know this then.

Forty years ago a lake sailor told this writer that the Lady Elgin, circling slowly as though her wheel were lashed and unattended, twice crossed the bows of the Augusta, forcing her to jibe to avoid collision It was dirty work jibing over in the thundersqualls that were blowing. The second time the steamer missed so closely that the oil lamps blazing in her saloon cast momentary shadows on the schooner's deck.

Above the thrash of her paddlewheels and the thundering of the Augusta's flogging headsails came the patter of dancing feet amid the singing of violins and tumpty-tum-tum of pianos, as the orchestra gaily pounded out "Listen to the Mocking Bird."

Dance music on a dirty night has no charms for the savage breasts of men hauled out of their bunks to jibe a fore-and-after while the rain runs up their shirt sleeves. The Augusta swung back to her interrupted course, with her canvas flailing from the steamer's wash.

There was more thunder, a fresh deluge of rain, another wild gust of wind.

Out of this fresh outburst of the elements again leaped the steamer's lights, and again came the tantalizing Mocking Bird's refrain. For the third time she was swinging so as to cross the Augusta.

This time the schooner did not clear her. There was a ripping of gingerbread work and a bump and screams. The steamer was struck on the port side, forward of the paddlebox. She passed on her spiral way and the Augusta continued a straight course through a dense deluge.

Malott, maddened by the music and the seeming indifference to his discomfort and rights-of-way, may not have understood that the steamer was killing time in order to avoid landing in Milwaukee in midnight thundersqualls. She had on board, in addition to other passengers, two hundred members of the Independent Union Guards of Milwaukee, with their wives and families, returning from an excursion to Chicago. The "night boats" between Chicago and Milwaukee often spent all night in the lake, docking in time for breakfast in the morning, although the run was only fifty miles. Malott may not have known that the Augusta was completely invisible to the Lady Elgin. Survivors swore that the schooner was running without lights. They may have gone out in the rain. Nor could Capt. John Wilson, master of the Lady Elgin, have realized how deadly was the thrust of the schooner's long bowsprit and wall-like bows.

Ignorance of the immediate facts as dense as the black night between the two vessels must have veiled the calamity, or the Lady Elgin's whistle would have been screaming for help immediately, and the Augusta would have been heaving to or lashing herself alongside in an effort to rescue the perishing. But the schooner went on, and the Lady Elgin went down. She sank in three hundred feet of water amid heart-rending scenes which lived long afterward in the mournful Come-all-ye's of the lakes. "The Loss of the Lady Elgin" was a waterfront ballad of many excruciating stanzas. It was also a lesson in one of the old Public school readers.

Capt. Wilson headed west for Milwaukee after the crash and set his crew to rolling barrels to the starboard side to keep the injured part above water. After twenty minutes, in which the Lady Elgin, being a fast steamer, went over five miles, she began to settle, her engine room flooded. Everything was wild confusion. Two hundred head of cattle, carried on the lower deck, were forced overboard to lighten the ship. Their drowning billows added to the din. Only one lifeboat was equipped. It had only one oar, and was battered against the side of the steamer. Two other boats got away, one with thirteen in it. They reached shore. The other boat had eight in it, and four of these drowned.

The engines fell through the bottom of the steamer. The upper deck cabins floated off with scores of passengers clinging to the superstructure. It broke into five fragments, from which survivors were picked off by rescuing tugs next day.

Capt. Wilson went down with his ship. The drowned included thirty-five Canadians, two hundred and fifty Americans, and some English visitors, among them Herbert Ingram, M. P., for Boston, Lincolnshire, and founder of the Illustrated London News, and his son. Of nearly four hundred people on board the Lady Elgin, only ninety-eight were rescued.

The Augusta and her master may have been equally innocent instruments of a tragedy. Malott went on about his business, but the Augusta was a haunted ship after the facts came out. The Averys sold her. B. G. Simpson, of Detroit, bought her. He renamed her Col. Cook, perhaps after the first Col. Cook lost two years before in the Gulf of St. Lawrence.

What American hero first honored the Cook clan by accepting a colonelcy is unknown, but his name certainly brought little luck to the vessels who bore it. The re-christened Augusta commenced to have difficulty in getting crews. The watch on deck "saw things" at night, lights that went round and round and were never there, and the boys in the bunks heard clawings and scratchings and scrapings of dead men's fingers on the planking outside. Of course it was only rats and rot gut that produced these phenomena, but that did not make it much easier to ship a crew or to keep one after shipping. The second Col. Cook spent much of her time laid up on the banks of the Detroit River. But she kept going until 1894, when she went ashore abreast of Euclid, a suburb of Cleveland, on Lake Erie. Her crew was taken off by lifesavers, but she was left on the beach and went to pieces.

The other Augusta was equally bluff bowed and slabsided, and built for the timber trade, but she was a different vessel altogether. At first she was a "barque"—really, a three-masted schooner with a square single topsail and topgallantsail. Louis Shickluna built her in St. Catharines in 1872. She was 139 feet on deck, 23 feet 6 inches beam and 11 feet 8 inches deep in the hold. She measured 372 tons. She was built for Sylvester Neelon and was in the timber trade up to 1890. After being laid up in Port Dalhousie for a number of years she was bought by Capt. Alex. Ure and the Conger Coal Co. in 1898 and fitted out for the coal trade. The brows were removed from her timber ports and she had no yards on the foremast. She was wrecked at Port Credit in a snowstorm on the first of December, 1900; mistaking the Credit light for the light at Victoria Park. Her crew was saved like the Col. Cook's, but like the Col. Cook she broke up on shore.

STEAMER LADY ELGIN, 258 feet long, 33 feet 7 inches beam, 14 feet 4 inches depth, built Bidwell and Banta at Buffalo, 1855, at a cost of $96,000; an upper lakes favorite and for one season on the route between Chicago and Collingwood.

From pen drawing by C. H. J. Snider, in the John Ross Robertson Collection of Canadian Historical Pictures, Toronto Public Library. The schooner shown in the drawing is of the type of the Augusta.

"THE LOSS OF THE LADY ELGIN" as Warwick's old Canadian Third Reader depicted it. 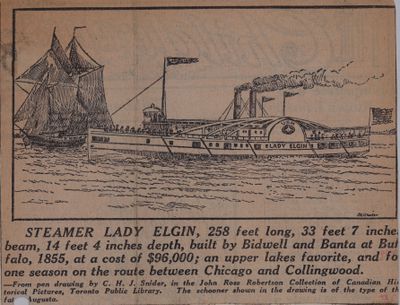 The Loss of the Lady Elgin
Groups of Related Records