This story of the Brothers of Bronte, came from Capt Joseph Williams, of Simcoe Point, Pickering, hale and eighty-two, one afternoon during this last Christmastide, while he was visiting his sister, Miss Daisy Williams, here on Hammersmith avenue, in Toronto. Capt. John Williams, one of his brothers, living around the corner on Ilesworth avenue, put in an assisting oar now and again. And my own brother Roy, who had also been through the mill, helped things along where he might. It was all very brotherly and more fraternal than a lodge meeting.

Very happily the Williams boys of Kew Beach, came into a little packet called the Brothers, sixty odd years ago, although they had neither the naming of her nor the building of her. This had been done before their time. The vessel was the Brothers of Bronte, so named, either for the Dorlands, of Bronte, who built her, or the Hendersons of Wellington Square, who owned her. One of the Hendersons was harbormaster there, and he had a brother who sailed vessels they both owned.

"First I sailed the Rover of Port Credit for four years," said Capt. Joseph Williams sitting back comfortably in the winter sunshine that flooded the room. "She was known as the Brig Rover, as she carried a square topsail. We were in the cordwood and lumber trade. I had for a crew my brothers, Tom and Jack. John" (with an affectionate grin in the direction of his septuagenarian younger brother) "is his right name. Jack for short. I was 15 when I went in the Rover, Tom 11, Jack 9. What boys had to do on the lakes in those days!

"I went up to Bronte on the 3rd of June, 1860, after father had agreed with Capt. Hank Henderson to buy the Brothers from him.

"'Take her, boy, and don't let any craft pass you on the lake,' was all Capt. Henderson said. I think I carried that out. I kept her stepping and we cleared $200 that year. I had my old crew, Tom and Jack."

"Yes," Jack commented, "the Brothers was a fine little scow, or big scow for her time. She would carry 90 tons of dead weight. The Dorland brothers built her in Bronte. I remember looking over her side, how sweetly all the plank-seams ran true, each plank a little wider at the ends, so as to give her a nice sheer, and very few butts, if any.

"The planks in her were each 60 feet long, and edge bolted. It was the edge bolting that held her together.

"I was in her hold one day, counting her frames. They were not spaced on twelve-inch, centres, but three or four feet apart. I looked where the chainplates of the fore rigging were fastened, and I could see 12 miles up the lake! I told Joe that, and he put her around on the other tack, and sent me down to look again. I could see nothing now through the chainplates where I had looked before, but she had opened up as much on the other side! She was light and baskety."

"And when they went to unrig her before building up falseworks to make her look like the Maine, and blow her up at the Exhibition in 1898," contributed Roy, "the whole bow fell out of her when they unbent the forestay!"

"Well, they blew her up just the same," protested Capt. Joseph. "But she certainly was fast, and I beat Jim Quinn in the Highland Beauty with her. Jim Quinn had the Highland Beauty before my brother Tom got her, and she was a regular yacht to sail. She had been intended for a steam yacht, but was bought in frame and finished as a schooner.

"One trip late in the fall I left Toronto at 12 o'clock noon in the Brothers and had my lines out on the Niagara wharf at 3 p. m., and that without pushing her at all. I never set her gafftopsails that trip, though I had a good pair, and a maintopmast staysail that set flying.

"I had a mixed cargo of lumber, and she was loaded so deep that when we were going in over the Niagara Bar, with the northwest wind behind us, the water would be up to her taffrail at one moment and she would be dipping her jib-boom in the next.

"It took three or four days, loading and unloading with teams in December then. Part of the lumber was for Mr. Edgar Jarvis, a brother of the Sheriff Jarvis. Mr. Jarvis felt uneasy about his part of the cargo and before we started he asked if it could be insured.

"'I guess not,' I told him, 'the vessel is not insured. I'll not lose the vessel, so your stuff will get there.'

"We had a dandy run home from Niagara next night.

"I had as fine a set of colors for the Brothers as was on Lake Ontario. Our home flag was a blue peter with a white arm and arrow in the centre. Father had been a chemist's apprentice in the old country, in a firm that did a wholesale drug business, and he used to notice the home flags of the ships bringing drugs to the firm between London and Aberdeen. This home flag was one which took his fancy. We had one like it for the full-rigged flagpole which stood in front of the cottage on the knoll where we lived on Hammersmith avenue. At that time it was all bush in the east end of the city, but there was a gap between the lake and our cottage, and if we were going up or down the lake I would fly the home flag, and at home they would run one up on shore in answer. I have a beautiful burgee for the Brother too, and an ensign, all made by Grant's sail loft in Hamilton.

"Another thing I had on the Brothers no other vessel had that I know of except one, and that was very pretty fore-and-aft schooner of eight or nine thousand bushels called the Gazelle of Big Sodus. She had a pair of gazelle's horns at her fore topmast head, and they were the pride of the lake.

"I had a pair of branching deer horns at the foretopmast head of the Brothers, and I've got them yet at home. I won them this way:

"Capt. John Goldring brought her down from Lake Erie a scow called the John Pugsley, which had a great reputation for speed. He afterwards rebuilt her, giving her schooner's ends, and called her the Helen. Everybody was talking about the Pugsley when she first came, and saying she would trim the Brothers' toenails, and I remembered what old Captain Henderson said to me when he let me take her away from Bronte. 'Take her, boy and don't let any craft pass you on the lake.'

"Both the Pugsley and the Brothers got a chance this summer—-it would be 1872 or 1873—and the stone trade that was building up between Frenchman's Bay and Toronto. We used to buy the stone there and bring it to the city for crushing for the new macadam pavements.

"We loaded stone in Frenchman's Bay and off the Halfway House we caught up with the Pugsley, which may have been finishing a deckload from the beach under the Highlands. At any rate, there we were, both loaded, beam and beam, and the race was on.

"Every move he made we made too, if it looked a good one, and if we hadn't already made it first. Some tacks we would leave him and sometimes he would leave us. It smoked up for a squall, and he clewed up his gafftopsails. There were four of us in the Brothers, and we hung on to everything, with our hands on the halliard coils. She came through the squall with everything set, and so we led him through the old Eastern Gap and across the bay, and caught the end of Capt. Taylor's wharf at the foot of George street, where we were bound. Leake's wharf was over on the west side; Taylor's to the east.

"A crowd had been watching from the waterfront, and our lines were hardly out when Charlie Golding, who kept the big frame hotel on the east corner of George street, came running across the Esplanade with this plush-mounted pair of deer's horns, which he had hanging over the bar.

THE BROTHERS OF BRONTE, with a close-up of her foretop mast head and its home flag and antlers. 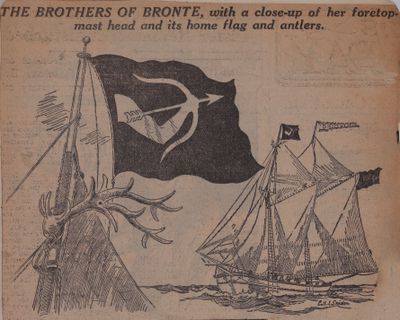