ONE of the many pleasures in running over the names of the seventeen hundred and forty-two lake vessels listed by this compiler is the recurrence of the name "Brothers."

There was the small schooner Brothers of York, built here in Toronto for a "joint stock company" (doubtless a family affair) according to Robertson's Landmarks, in 1820; there was the Brothers of Bronte; and the Brothers of Collingwood — at least this Brothers was one of the first arrivals into the Hen-and-Chickens one navigation season of the early fifties; she was a little schooner, like these others, but became a propeller.

There were the Two Brothers of Port Hope, built not there, but at Port Burwell; and another Two Brothers, built in Sorel. One was 92 feet long on deck according to the register, and the other 89 feet. lf the Sorel one wasn't owned by the Keelers of Colborne in 1873, there must have been still another Two Brothers, for one was hailing from the "Port of Cramahe" in that year.

There were more Two Brotherses, or whatever is the plural of that name when applied to a vessel. There was a topsail schooner trading from Oakville in the 60's, owned and sailed then by Capt. McDonald. True, she may have been one of the Two Brothers already mentioned, but as John and Melancthon Simpson were building in partnership at Oakville about this time, the name suggests one of their products. Or she may have been commemorated the partnership of Jacob Randall and his brother-in-law John Jeffrey, who built many Oakville vessels. These schooners were all about of a size, carrying 300 tons or so of dead weight.

There was also a round-bilged puncheon-bowed schooner-scow owned in Belleville up to 1898, and perhaps later, by A. G Cousins et al. This was the Two Brothers, of Picton, built or rebuilt at Battersea in 1881. She was 95 feet on deck, a little longer than the Port Hope and Oakville schooners, but being only 18 feet 6 inches beam and 4 feet 8 inches depth of hold, she could not carry half their loads. And there was besides the Two Brothers, of Kingston, built there away back in 1846 and later lengthened, and owned by William McDonald, of Wallaceburg in 1864. She was a barquentine, a little three-master of about 500 tons carrying capacity.

All these fraternal names are pleasant reading— "Behold how good and pleasant it is for brethren to dwell together in unity"—because they are redolent of the time when families worked hard together and the sons followed the father's same calling and were proud of it, and proud to have their names linked. And if there is any association which exacts more from those concerned, in the way of loyalty and patience and unity, and which pays better dividends in development of character, than owning or working a sailing vessel "share and share alike," it has yet to be discovered.

Dozens of lake shore families used to be so bound together; the Muirs, the McSherrys, the Corsons, the Ewarts, the Goldrings, the Naishes, the Williamses, and so on, to mention the first half-dozen that comes to mind.

It is amazing how widespread the interest in these "fraternal organizations." This week the compiler of Schooner Days had a letter from Shaker Heights. Ohio, asking for further details about the Ewarts. John Ewart Wilson, a grandson, was the inquirer.

Old Capt. James Ewart, sr., owned many vessels in Cobourg. He and his boys sailed them—the Atlantic, the Pacific--he took her to England and South America — the Albacore, the Speedwell, the W. T. Greenwood, the Caroline Marsh, the Nellie Marsh, the Vienna, the Lady Macdonald, and possibly others. The Ewart boys, John and Jim and Dave sailed them.

Sometimes they lost them, too, for such is the way of the water with the best of men Jim lost the Pacific, bringing her home from New York, after she had twice crossed the ocean, and Dave lost the Caroline Marsh at Oswego and the Lady Macdonald at Fairhaven.

Mr. J. B. Chalmers, of Acton, Ont., was inquiring about the Lady Macdonald last month and where she came to grief. That's what happened to her, in 1893. She was going into Fairhaven in a fresh breeze and the captain sang out to the man at the wheel, "Keep her up! Keep her up!"

"I am keeping her up!" shouted back the helmsman.

Just as he spoke she took a sheer and shot in on the wrong side of the lighthouse. She piled on the beach instead of taking the channel, and the shore farmers picked her bones. She was a fine schooner, too, built in Port Burwell in 1873; plumb stemmed, black, with a red petticoat, white covering board and yellow beading. She was a three-master, but she sailed all one season—1891 or 1892—with only two masts, having lost her mizzen. She was wrecked just after she was refitted with her original rig at the old Waterworks Dock in Toronto.

Sir, --As two hearts that beat as one as regards "Schooner Days' I may say I have been reading your weekly stories and I get a great big kick out of it. I was raised among vessels and I can easily call to mind by name some 35 or more of windjammers alone, besides the numbers of steam barges with their respective consorts.

I enjoyed your story. "White Oak," also the memories of the late Magistrate O'Connor. I am coming around to see you some time, all being well, With a mutual feeling, and with best wishes for yourself and Schooner Days, I am sincerely yours.

The latch string is out, and the watch dog tied up, A. B. The Picton Times also enjoyed the "White Oak" story, so much so as to reproduce it in full, crediting it to The Telegram fore-and-aft in proper seagoing fashion.

An echo of old adventure in Canada is given in a letter received by a Toronto resident, in answer to an inquiry, from a minister of the United Church in Nova Scotia. A puzzle to the genealogists in the United States, apparently, had been the Benjamin Reynolds, midshipman of the Colonial navy, b. 1722. Newport, Nova Scotia, was associated with the name in 1761.

A son or grandson of a bishop of the Church of England in the Old Country, according to hazy family tradition, he ran away from home when a boy of fifteen or so, because his father was rather strict, and was seized by the press gang and taken on board a man-o'-war, where he served a great many years; as an old man he was on board the Shannon in her duel with the Chesapeake.

He married in New England and was given a grant of land in Newport, N. S., in 1765. He had several sons, whose descendants are to be found in different parts of Nova Scotia. A daughter, Elizabeth, lived to be 106; a son, Benjamin, is the great-grandfather of the Nova Scotian minister referred to, but the first part of his ancestry still needs some clearing up; according to one American genealogist he descends from Robert, of Aylesworth, England, and Bristol, Rhode Island.

There are many versions of the name in Ontario; Randal, Rannold. Randolph, Fitz Randolph, McReynolds, Rannels, Runnels, Rendel, Rundle and, perhaps, Crandale.

The Capt. Jacob Randall after whom Randall street in Oakville is named, and who may have inspired the name for the Two Brothers, came to Lake Ontario from Nova Scotia. His name may have been a variant of Reynolds and he himself a collateral descendant Midshipman Benjamin Reynolds of King George Ill's colonial navy. There were also Reynolds seafaring out of Oakville fifty years ago. Capt. Dave Reynolds, of the yacht club launches, was boy man and mate out of Oakville at this time. There is, of course, a distinct family of Reynolds tracing back to England and Ireland; but, in a new country, no one was very particular to see that registrars were accurate. Quite as acceptable as "Joseph" was Josave, and the same was true of surnames. If any members of the early Canadian or American families of the above clan would care to pre-serve their genealogies by writing them down they will be forwarded to one interested, if addressed to the editor of Schooner Days.

THE PASSING OF THE WIND-JAMMER.

Some odd times now I see her

But she doesn't seem to be the ship

She was in the olden time.

With canvas patched and bowsprit drooped,

Her spars sprung to the fore,

And methinks of an aged shell-back 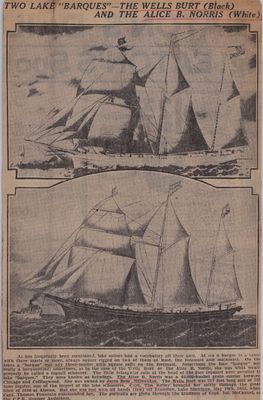