Capt. Joseph Williams recalls when they loaded flour in Duffins' Creek, and a Grand Trunk engine nipped the nose off a schooner that climbed the Esplanade. —Worthy scion of worthy pioneer from Kew on the Thames.

TO-DAY is Capt. Joseph Williams' birthday; eighty-two, and in good health at his country home, Simcoe Point House, down by the lake shore, where Duffin's Creek flows in, near Pickering, for which we are all glad.

Lake mariners and hosts of other friends join The Telegram in wishing him many happy returns. Capt, Albert "Nipper" Quinn writes from Oakville: ".... Say, we were coming up the lake in an easter in the White Oak. I can see Capt. Joe standing on the quarter-deck of the Speedwell in a big coonskin coat, with a squatted foresail and the seas breaking over his quarter, and Capt. Jim hollered at him to put more sail on her, or he would drown the whole crew. But Capt. Joe knew his business, and the Speedwell was certainly a squirmy one to handle with a following wind. —Wishing Capt. Joe and his brother, Capt. Johnny, the very best of health and a long life..."

Capt. Albert's imagination reels at the bare idea of the schooner Brothers, which the Williams boys once sailed, having ever beaten the Highland Beauty when Capt. James Quinn was at the helm. "Capt. Jim is gone, but he still has a brother to protect him," writes Capt. Albert. The Highland Beauty is another story, and a good one, and we shall have to take a field day for her later.

CAPT. JOSEPH WILLIAMS, of Pickering, is the son of an elder Capt. Joseph Williams, who came to this country almost a century ago. He was a Londoner, with an attachment to Kew which, was almost passionate. Although a seafaring man, he had a rare vision of land development in Canada. With great foresight he built his log cottage and acquired property in what was then and long afterwards a "howling wilderness" far outside the fringes of the new city of Toronto. This was a marshy tract on the lake shore to the east, covered with heavy timber, fallen or standing. It is the present, magnificent residential and park section known as Kew Beach—--and it is known as Kew Beach because the first Joseph Williams called it such.

People laughed when he tried to make a pleasure ground of the wilderness, after the fashion of his beloved Kew at home, where the lilacs bloom so brave. They called him "Kew Beach Williams" almost in derision, but he named his last-born son Kew in faith and affection. Kew Williams and his brothers are still alive and doing well, and Kew Beach is a great Toronto institution.

Joseph Williams was "Kew Beach Williams'" first-born, and on him, as was fitting, the direction of family affairs fell to a great degree. He was sailing the scow Rover for his father when he was fifteen, and his crew consisted of his brother Tom, aged eleven, and Jack, then at the ripe age of nine.

After four years, these three musketeers went into the scow Brothers together. Some of her history was given in Schooner Days recently. Capt. Williams says it was correct, except about clearing $200 the first year.

It was better than that. "I cleared, fifty per cent, in the first five months," says Capt Joseph, with justifiable pride. "I only knew this to happen to one other, Capt. Caleb Giles, of the Flying Cloud, which grossed $14,000 in the season. Her running expenses were only $7,000, which gave her fifty per cent."

"No, I only sailed with my brothers for occasional trips or holidays," "Mr. Kew Williams confessed recently. "I was the youngest of the boys, and my brother Joe said: 'There are too many of these vessels going up and down the lake and drowning all hands some dark night. You'll stay ashore, Kew, so if anything happens to the Williams boys, all mother's eggs won't be in one basket. '"

Captain Joe was in many vessels, as man, mate and master, and so were his brothers. All had a good share of luck, and the lake took no toll of the family. His life covers the span in which lake carriers have grown from little bits of things built in every creek mouth, and picking up their loads of cordwood, lumber, gravel or grain on the shore to gravel or grain on the shore to floating warehouses like the Canada Steamship Lines' Midland-built flagship Lemoyne. She shouldered a sack of 16,588 tons of coal in 1930, and once strode down to Port Colborne with 571,885 bushels of wheat, establishing a world record for bulk freight. The Lemoyne's grain cargo would make 12,350,000 loaves of bread. It would take the crop of a thousand farms with forty acres each in wheat, and the train of 60-ton freight cars carry it would be 2 1/4 miles long, "And I've seen a little vessel lie here in the mouth of Duffin's Creek," said Capt. Joseph, pointing to the stream which makes delightful his lakefront farm and cottage colony, "though the bar runs across its month now so that you can cross it dryshod. She loaded flour there in bags, ferried down to her on a deck scow from the mill above. And just across the creek is where they built the Belle of Dumbarton. She was a fine little schooner in her day, and brother Jack sailed her for his first venture on his own. He chartered her when the big vessels had laid up for the season, and cleared $80 for himself and his partner, after paying his cook, before he was frozen in for the winter. But the Lemoyne would carry six hundred of the Belle's best cargoes in one trip."

"About Toronto Point," said he. "It has built a third of a mile west from Hanlan's Hotel in my time. I have laid out there to anchor the last trip in the fall in the Clara Youell loaded with peas, for eight days and eight nights in blows up Lake Ontario with a whole fleet of sail vessels and steam boats laying to anchor. It was like a city at night with all their lights. They all got away together, some of them after laying to anchor where the western island, sand bar is to-day with the cottages on it, and that was only in the eighties.

"Talk about high water times! I saw the old schooner Quebec get up on the Esplanade at the foot of Scott street and a Grand Trunk engine take the jibboom and head gear [ ].

THE HIGHLAND BEAUTY, which was owned in turn by the Quinns and the Williamses and whose exploits still survive in waterfront lore. The picture is from one by C. Gibbons, in the possession of Capt. Albert Quinn. 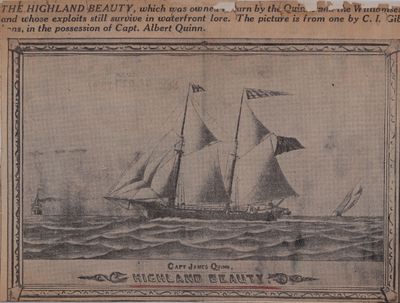