This season's low water has again uncovered an ancient wreck on the south shore of the Island, just around the south-west corner, before you come to the old stone lighthouse. Every "ebb" tide on Lake Ontario does that, but, as is generally known, these "tides" of the lakes take years between spring and neap. They average about seven years between high water marks, but the periods may be eleven years one time, four another, and so on, and high water and low water seldom touch the same mark twice.

It is nineteen years since so much of this old wreck was uncovered as now. If memory serves, it was at the water's edge in 1913, and now it is several yards inshore. It has not moved. it is too firmly bedded in the sand and gravel. It is the lake that has moved away from it. It lies where it struck, at least a hundred yards out from shore at the time. Next year perhaps or the next, or next, the water will brim up and cover it, and the children who have payed among its bones will forget that it lies out there in the undertow. That's a way Lake Ontario has.

Whose wreck is it? Not who is its owners, but what wide-winged craft came to grief here, and when, and how?

There have been many guesses, for this wreck has been on the shore many, many years, sometimes visible, often not.

Nineteen years ago one suggestion offered was that this was the famous Toronto yacht, Government despatch vessel, built in 1799 and wrecked on Toronto Point in 1812. A handsome topsail schooner this was, from John Dennis' honest adze and chalkline. The wreck is not here. It is very old and very bleached, but is the wreck of a centreboard vessel, and centreboard the Toronto Yacht had none.

Centreboards, slip-keels, or sliding keels had been invented as early as 1812, but their use was very rare, and it is more than probably that if the Toronto Yacht had been equipped with this "modern innovation" much mention would have been made of the fact. But there is none, although the launching, arrivals, departures and ultimate wreck of the Toronto Yacht are all duly chronicled in the Upper Canada Gazette and other contemporary records.

So the Toronto Yacht is out.

Then what wreck is it?

This is where the laborer in "Schooner Days" asks assistance. Probably some reader can give the answer. Mention of these few facts may save wasted effort:

(1) The wreck is not that of the Reuben Doud, which cam ashore almost two miles farther east, in August 1906. This wreck had been bedded in the beach years before then.

(3) The fact that the wreck had a centreboard slot would fix the craft as built some time since 1840, and the condition of the wreck and its tough iron and hard oak would suggest that it has been on the beach at least forty years, or, say, since 1892.

(4) Some of the wrecks on Toronto Point, between those dates, which might fit the case, are:

Schooner William Wallace, 60-ton vessel owned by G. Wallace, Port Whitby, where she was built in 1848. She was lost with all hands, supposedly abreast of Toronto lighthouse, in October 1857, disappearing at dark on her way up from Darlington Her hulk may have washed in here, but the wreck is larger than one would expect for 60 tons.

Schooner Garibaldi, one of several of that name, wrecked on the point in a sudden shift of wind in November 1874. The late Wm. Ward, however, said that this Garibaldi broke into small pieces within twenty minutes of striking, and that she was "red rotten." The oak in our wreck is still remarkably tough and sound.

Schooner Olive Branch lost her mainmast and blew ashore somewhere near this spot, November 14th, 1875, but Wm. Ward, who rescued the crew, said she came in more to the eastward than where the wreck lies.

Schooner May Grover was lost on Toronto Point about 1889, when starting out on a voyage for Oswego, with a load of peas. She grounded, and the water got into her cargo, and the peas swelled and burst her. She was built at "Colborne Harbor, Port of Cramaha, Ont." in 1855, according to the Dominion register, and her dimensions are pat for this wreck-85 feet on deck, 20 feet 4 inches beam, and 7 feet 6 inches in the hold.

Measurements made this week show that the floor frames of the island wreck on the starboard or landward side extend ten feet from the keel. She was, therefore of at least 20 feet beam. The slot for her centreboard is 5 inches wide and 20 feet long.

The wreck lies on the slant, apparently headed lakewards. An upright fragment of timber which might be the remains of the stem seems more likely to be what is left of a sternpost. It is now much decayed, but apparently once measure 6 inches by 12 inches. It is backed by an apron or sternson knee that once was 12 inches on one face 18 inches fore-and-aft, and 24 inches wide on the other face.

The thwartship timbers showing consist of a few frames or floors, 4, 5 and 6 inches wide and 8 inches deep. Inch boats of iron, protruding for a foot, show that some of the heavy timbers are missing.

Construction throughout is of good white oak. Some two-inch planking is left. A section of the keelson, probably the part under the mainmast step, is gone, but the remainder is 12 inches by 12 inches or larger. One section of keelson from the sternpost forward is fifteen feet long. A teen foot piece is missing. Twenty-five feet from the sternpost is another section of keelson 32 feet long. From this the 20-foot centreboard-slot has been hewn out. It was originally a very fince piece of oak timber, eighteen inches wide on the bottom and 12 or 14 inches wide at the top, and the same measurement through. It is really the pocket-piece of bottom log of the centreboard box, and it bolted through and through to the real keelson, which is just discernible in the sand below it. This timber is two inches wider on each side than the pocket piece.

From the supposed sternpost to the further end of this piece with the centreboard slot it it is about 57 feet and the keel extends under the sand for 25 or 30 feet more.

What ship was it that came to grief here long ago, to emerge now and again, like her own ghost, when the lake water is low?

Sir.--I ready with pleasure the account in Saturday's issue of the "Algoma."

The article and the drawing were most interesting, and I am sure very much appreciated by your many readers.

Thank you for so kindly acceding to my request for this article.

And another thing -- 817 readers have mentioned the undoubted fact that Donald A. Smith became Lord Strathcona.

Someone has questioned the statement that the "other Algoma" (originally City of Toronto), was alive as late as 1887. The catalogue to the John Ross Robertson collection is authority for the statement that she was broken up for scrap in 1888.

Sir,--The Evening Telegram of Saturday, Nov. 5th, contained an article in which I was quite interested, namely, "The wreck of the C. P. R. steamer Algom," 47 years ago. I was born in Port Arthur, but at that time was too young to know anything about it. I have in may possession a dining-room chair that floated from the wreckage. As soon as the storm was over, my father with several others from Port Arthur, went out to Isle Royale, and he salvaged the chair. After my parent's death I brought the chair to my home here. It has been in constant use all these years, and is still in the best of condition. Since it came into my possession I have often thought of trying to find out the date of the disaster, as I prize it now as an antique. I might also say that the photograph of the wreck owned by Captain Jame McCannel, interested me, as one of the men in the picture looked very much like my father.

Dave Williams of the Enterprise-Bulletin, who knows all there is to know about steamers out of Collingwood is quite sure that the side-wheeler [ ] and that she was used for a special trip around the bay in July 1878 when Lord Dufferin, Governor-General visited Collingwood, and after that she was laid up at the old Northern Elevator and later dismantled and towed to the west side of the harbor.

Mr. Williams like The Telegram's "Algoma" story of last Saturday so well that he is reproducing it in the Enterprise-Bulletin, crediting it handsomely. 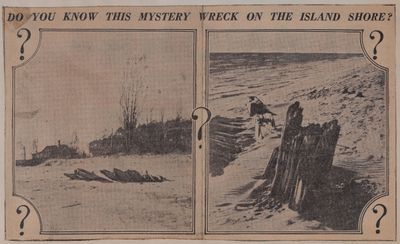