Frank Jackman was a good sailorman, a good tug man, a good business man, and a good dresser. He was, indeed, a tonsorial and sartorial delight. To meet Frank uptown was to learn the latest in hats, haircuts, haberdashery and shaving lotions, to meet him on the waterfront was to get an education in vessel handling. He was a credit to this city and it is a pity he has gone.

In the month of June, 1865, the regimental bands were playing aboard the steamer City of Toronto, and every scrap of bunting on the waterfront was ablaze, as the old side-wheeler, drowning the brasses with her whistle, towed the little brigantine Sea Gull from the foot of Lorne street out through the Western Gap, and into the lake.

There was good reason for all the blare and bunting. The Sea Gull, built in Oakville the preceding year, and owned by Capt. Frank Jackman, of Toronto, was starting out for South Africa, with its cargo of knock-down houses, buggies, flour, hardware, dry goods, groceries, and a hundred and fifty kegs of Canadian whiskey, all destined for the Natal colony beyond the Cape of Good Hope.

A little sailing vessel was the Sea Gull, 105 feet long and capable of carrying a dead weight of about 400 tons. Though ships were small men were big in those days. Not to string maters out, the Sea Gull made her voyage to South Africa safely and cam back to Boston with pepper and arrowroot and ivory, and home to Toronto with a cargo of cordwood--and the original whiskey--after delivering a cargo of flour in Newfoundland and coal in Montreal.

We shall have "full details" on the whole voyage one of these Saturdays. The point about the brass-and-blare setting is that the festivities of the occasion served to divert attention from a small boy who secreted himself in the Sea Gull's cabin, under the captain's bed, just as the mooring lines were cast off.

It was this gallant young mariner who dipped below the horizon only last Monday, at his daughter's home in Toronto, seventy-five years old by registry office records but seventy-five years young in the hearts of most of friends. "Young Frank" Jackman he was all his life, though he was a better known vessel man, tug skipper and master mariner than his foreign-faring father.

Of course it did not take Old Frank long to find Young Frank at the bottom of the bunk. Capt. Jackman pointed out thee were enough Jackmans already aboard to weary any Sea Gull's wings; here was himself as master and Young Frank's cousin Jim, as mate. Moreover uncle Henry Jackman was getting ready to take the Jessie Drummond over to Germany. It would never do to have all the Jackmans away at once. Who would be there to look after mother?

Faced with this problem Francis Junior gamely volunteered to go back right away.

By this time the City of Toronto had cast off and the Sea Gull was horsing down Lake Ontario with her fore topgallantsail pulling like a tractor. Old Frank said Young Frank could stay until they got to Kingston; and at Kingston next morning he put him on the train with a half fare ticket for Toronto. Francis Junior dutifully kissed Francis Senior's sun-burned but smooth-shaven cheek. Francis Senior tickled him with his frosted flaxen moustache, the train snorted, and the Sea Gull resumed her flight.

Young Frank's home guard duties were simple. He had to go to school and he had to be very, very careful about shutting the front door. Strangers were not to be allowed to prowl about Capt. Jackman's mansion while the master was away.

In April of the following year coming up Parliament street, home from school. Young Frank saw a man with a bushy white beard. The man quickened his pace. Frank ran. He had barely burst into the kitchen when the doorbell rang.

"See who it is, Frank," said Frank's mother.

"It's the old man with the big white beard what was coming down the street," reported Frank, after a cautious keyhole reconnoitre.

"Well, see what he wants," called Mrs. Jackman from the midst of supper preparations.

Frank was engaged some time in the process, carrying on negotiations through the keyhole.

Mrs. Jackman flew to the door and flung it open. In bounced Capt. Frank Jackman, Sr. His little son had never seen him except shaven. Like many a man in those days who had to be out in all weathers, Capt. Jackman let his beard grow for the winter; and like most of this clean-shaven generation would be, he was surprised to find that after thirty years of repression, his beard came out white, or almost so. All the Jackmans were blonde Vikings.

Frank Jackman Sr. had brought the Sea Gull to Boston on the way home and had run overland by train, to see his wife and family. After a short stay in Toronto while the Sea Gull unloaded he went back and brought her home in the following July, after sixteen thousand miles of voyaging.

Capt. Jackman's safe arrival from South Africa was celebrated by his fellow townsmen right royally and without delay. The last time Capt. Frank Junior was in The Telegram office, talking over "Schooner Days," he showed a beautiful gold watch, inscribed thus:

"Presented to
Capt. F. Jackman
Brigt. Sea Gull
of Toronto
by a few of his
maritime friends
April 10th
1866."

This was his father's best souvenir of the Sea Gull's voyage--apart from the $2,000 profit which the venture yielded.

They were a seagoing family, the Jackmans. While the Sea Gull was away Capt. Henry, Capt. Frank's brother, and father of the present Henry B. Jackman of 26 Binscarth road, had taken the barquentine Jessie drummond (built in St. Catharines) across the Atlantic with an outward cargo of lumber and timber, and brought her back with iron rails, loaded in Hamburg.

Reford and Co., of Toronto and Montreal, were the shippers of the outward cargo of both vessels and the Jessie Drummond was named after a young lady of the Montreal house which owned shares in her. On the Drummond's return passage Bob Moon, a brother-in-law-of Capt. Ted Thomas of Oakville, was drowned; but not a man of the Sea Gull crew was lot. The last of the men who went to South Africa in her died "out west," in 1930. This was Hooker Evans, formerly of Port Credit. His brother Murdoch Evens was also in the crew ... 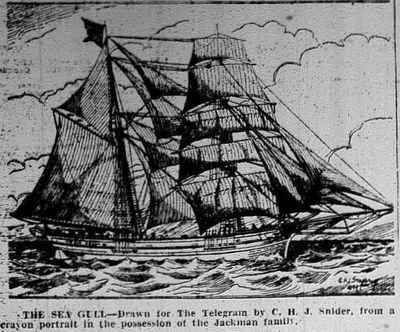