It must have been a fearful gale on the 27th of November, 1860, for the old file of the Toronto Leader thus outlines the night's ravages, in a Kingston despatch: —

"Propeller Coaster gone to pieces at Stone Mills, near Picton.

"Schooner Enterprise, with oats from Hamilton and Toronto, ashore near Point Peter lighthouse.

"Schooner Omar Pashax wrecked on Stoney Island. Vessel and cargo worth $30,000, and owned by Gooderham and Worts, Toronto.

"Schooner Nonpareil reported lost, but safe in Sackett's Harbor with her sails gone.

"Barges Cleveland, Clayton and Coleraine ashore in the river between Kingston and Brockville."

It is this setting that preludes the lake life of Capt. Nelson Palmateer, of Cherry Valley, in Prince Edward County; famous for many things, and among them the farewell services they hold every spring in Cherry Valley for the Prince Edward boys who hear the lakes a calling each April, and fare forth to wrest a living along their thousand-mile highway. Hale and almost eighty, Capt. Palmateer has had many adventures since he first saw the light at Point Traverse, and here follows one: —

"FATHER made the best of both worlds by farming and fishing at the same time. He worked a farm on the narrow peninsula of Point Traverse, two miles from the actual point, which forms the southeast corner of Prince Edward County, with South Bay on one side of it and lake Ontario on the other; and he netted herring and whitefish and salmon trout in the lake. He and Uncle Zachariah also owned and sailed many schooners—the Edith and the Garibaldi, of Port Hope, and the Meteor, and the Maggie of Montreal, the Flying Scud that became the Flora of Picton, and so on. Father was Capt. John Y. Palmateer, justice of the peace and magistrate for Prince Edward County. His mother was a cousin of Sir Isaac Brock's.

"This particular night father had been up the shore a piece, and hauled his fishboat out. After he got home

it started to blow a howling gale, with snow, and he said to mother as we sat around the big kitchen stove after supper: 'This would be a terrible night for anyone unlucky enough to be out in the lake. I hate to leave the house, but the snow is going to fill the skiff where I left her, and I think I'll go up the beach and turn her over.'

'When he opened the door to go out, the sleet and snow swept in freezing cold, with clots of foam from the lake, and the wind howled like a pack of wolves. Before the house had time to warm up after he had closed the door, he flung it open again and shouted: 'Put on all the water you can on the stove, mother, and heat up food! Come along, Ephraim! Come along Albert! There's a big vessel aground a quarter of a mile up the beach. Her boat's smashed, and the seas are washing over her crew in the rigging!'

"Ephraim and Albert were my two older brothers. I tumbled out after them. Father called the neighbors, farmers, fishermen and sailors like ourselves, and hitched the team to the heavy waggon, and up the beach we all went, lurching and pitching through the drifting snow and the grinding shingle.

"By the light of the snow and the foam we could see the stricken vessel. She was a big fellow, what we then called a barque, with yards on her foremast, all mantled with snow, and her crew clustered in frozen bunches on top of her gaffs, lashed there with ropes to save themselves from being washed overboard. Her torn sails were streaming in the wind, and the seas were sweeping over her. She was quite close, perhaps not more than fifty yards out, on a bar, with deep water between her and the shore.

"Our fishboat lay on the beach, where father had hauled it up. The seas were breaking so hard that there was no shoving her out against them. But the crowd loaded the fishboat on to the waggon, and the brave horses backed it down the shelf of the shore and into the surf, until it floated. Then, all hands pulling together on the oars, it shot out near enough to the wreck to toss a line weighted with a sounding lead across one of the gaffs. The shipwrecked men hauled on this and brought the boat close.

"'We can't take you all at once, father called. 'But we'll not leave any of you to drown. Three at a time, now, and we'll come back for the rest.'

"In this way, in three trips, the whole crew of ten were taken off and landed—wet, frozen, half dead with cold and fright, but safe.

"As fast as they came ashore they were bundled into sleighs and wagons and hurried to our farmhouse, where mother had everything ready for them and piping hot. One young fellow, Jack Wilson by name, was so overjoyed, when he came to and found himself really safe, that he danced up and down on our kitchen floor till he burst the boots off his feet. But some of the poor fellows couldn't put a foot to the floor for weeks, they were so frostbitten. We had them with us for a month.

"The wreck was the St. George, of Chatham, a fine three-masted barquentine, laden with 20,000 bushels of wheat for Kingston. The weather set in very cold immediately afterwards, and the ice formed around her solid, and protected her from the pounding of the seas.

"The St. George was new and strong. She was just as old as I was then, half past six. She was launched at Chatham in 1854, and I was born at Point Traverse on the 7th of June, that same year. She was a very well built vessel of 307 tons register, and, in spite of the damage above decks, she held together and her cargo was not ruined. Father was given the contract for salvaging it by the underwriters, and sold it to surrounding farmers for them. They drove in during the winter and carried it home by the sleighload.

"In the spring the empty hull of the St. George was floated off the bar and towed to Kingston for repairs by Capt. Gaskin, who had bought the vessel. She was soon in commission again, but on the 1st of October the very next fall she was wrecked, close to the spot where she came ashore on us.

"This night I speak of Red Rover, a fore-and-aft schooner that would carry seven or eight thousand bushels, was blown ashore on the tip of the point, two miles down the beach from where the St. George lay. We were so busy with the one wreck we did not hear about her till the following day. She went to pieces, but the fishermen of the point got her crew of six off safely. The brig Mayflower and the schooner Welland also drove ashore nearby. They were only a few of the score of vessels that were victims of Lake Ontario that night."

A DREADFUL thing happened the schooner Omar Pacha, whose wreck was also mentioned in the Leader's despatch. Capt. Frank Jackman, who died last April, told about it the last time he was in The Telegram office. Capt. Henry Jackman, his uncle, was part owner and was sailing the vessel for Gooderham and Worts, grain merchants as well as distillers, and she had left Toronto with a valuable cargo for Cape Vincent.

In the thick snowstorm she struck on one corner of Stoney Island, one of several large islands, before Lake Ontario begins to narrow up at the east end for the St. Lawrence river. They did not know where they were, but they noted that the mainmast, which crashed when the vessel struck, did not wash alongside, but projected at right angles from the hull, as though supported at the upper end.

The schooner began, to break up immediately, with seas smashing everything above deck and bursting the deck planks, and one by one the crew of several retreated along this projecting spar, into the blank white wall of the whirling snow. When they passed the crosstrees they found that the topmast head reached to a snowdrift on the brink of the lake bank and along this slippery bridge they scrambled until they were all ashore.

It was blowing a blizzard, and they had no idea of direction, but they staggered through until they came to a rail fence. This they climbed with difficulty, so as to get the shelter it afforded, and in the lee of it they crept along, hoping it would lead them to some shelter. At last something huge loomed through the snow, and they found themselves in a barnyard, and felt their way by the walls and fences till they reached the farmhouse.

When they were dragged into the kitchen by the hospitable farmer there were only six of them. The seventh, the cook, a big stout man, was missing. With poles and lanterns they fought their way back through the snow as far as the lake shore, looking for him, shouting, hallooing without result. They concluded he must have fallen from the broken mast, as they were making their way ashore, and been drowned. There was not enough of the vessel left, when they got back to the wreck, to make it possible for him to have survived there.

Capt. Jackman and his crew were on Stoney Island for a month, until the lake froze over at the east end and they were able to cross to Kingston in a sleigh. Their friends had given them up for dead.

In the spring, Capt. Jackman returned to the island to see if there was anything that could be salvaged from the Omar Pacha. She had completely disappeared. But in a melting snowdrift in a corner of the fence they had climbed with such pain was the corpse of the Omar Pacha's cook. The poor man had fallen back from exhaustion, in the effort to climb, and had smothered in the snow, unseen of his suffering shipmates.

The Omar Pacha was a two-masted schooner of 220 tons register, built at Oshawa during the Crimean War by a travelling shipwright named Lamorse or Lummaree. This builder also built the schooner James Coleman, at what is now the inland town of Dundas, but at that time (1847) was "on the water" by reason of the Desjardins Canal; and the Paragon at Oshawa; and at Coldwater the barque Reindeer, which made the voyage from the Georgian Bay to London in 1855 with a cargo of walnut shipped by Pierson of Chatham, Ont. The Reindeer was registered overseas as "built in Toronto," but she was really built at Coldwater for Dr. James John Hayes of this city and his brothers. This fine example of "bush built" Canadian shipping was 133 feet long on the keel, 25 feet 6 inches beam, 13 feet deep in the hold, and 142 feet over all. She registered 348 tons gross, and classed A-1 at Lloyd's for seven years. She was sold when she arrived in London and transferred to English registry in 1856.

Omar Pacha, or, in more modern spelling, Omar Pasha, was, as many may not know and some may have forgotten, an Austrian who embraced the Moslem faith and was brilliantly successful as a Turkish general against the Russians. He was at the height of his popularity when the schooner named after him was launched.

As said above, Capt. Palmateer has had many adventures, and some of them will be recounted in succeeding issues of Schooner Days. 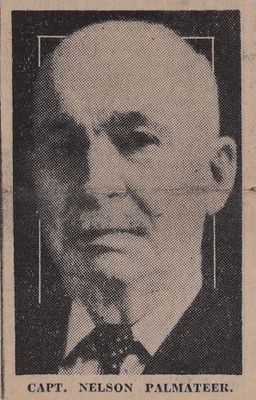