R. W. Johnson, chartered accountant, of St. Thomas writes of his boyhood recollections of lake vessels interestingly to friends that it seems a pity followers of Schooner Days should not have the benefit of his brisk recollections. Here are some:—

WHEN I was a boy at Port Hope all my people were in the vessel business, and many a cruise I had in the good old schooner, W. J. Suffel, which they owned from about 1886 to 1889. They sold her when business got bad and my recollection is that some skipper, sailing her too short-handed, piled her up on the rocks at Oswego a year or two afterwards. My father always said that she was an exceptionally fine schooner and handled like a yacht, and that he could sail her into any port in any weather with a couple of good men.

Port Burwell, on Lake Erie, was, as you say, a great centre for shipbuilding in the seventies, and when I came to St. Thomas 30 years ago I was much interested to meet people with names such as Suffel, Wrong, Youell, Emery, and others, for these were names of vessels with which I had always been familiar, owned and sailed out of Port Hope. There were the W. J. Suffel, George Suffel, Clara Youell, W. Y. Emery, Vienna and many others, with Port Hope on their sterns that had been built at Port Burwell. In addition there were many vessels that had been built at Port Hope as well as hailing from there.

You would want to go back further than my day to the times when my father sailed in the North Star, the Agnes Hope, the Fellowcraft, the Acacia, the Lewis Ross, the Ariadne, and others that are only names to me. In those days out of Port Hope there were Captains Richard Clark of the Agnes Hope, John Strickland of the Aurora, Joe Philips, Bob Colwell, with E. S. Vinden, Jim Leverich, James Quinlan, Charles Smith and others in the lumber and barley business as owners.

Later on I recollect Capt. Bob Henning, of the Maria Annette, Big Jimmie Haddon, Bob Fox, George Robinson, who had the Mary Ann Lydon towards the end, and several more. Among them particularly, Capt Walter Colwell with the good old Caroline Marsh. Many a trip I had in her with Capt. Colwell and my father. She was then owned, I think, by Capt. Vinden or possibly Jim Leverich, but was sold and they then took over the S. & J. Collier, a smaller boat but a snug one. When in Oswego one day in the Collier the Caroline Marsh came down and went on the rocks at the old fort. Rugged old Walt broke down and cried when he saw her pile up. They got aboard the wreck and saved certain souvenirs, such as the ship's bell off the forecastle and took these back to Port Hope.

But the names of the vessels are clearer in my mind than those of the men, although I can never forget that one bearded skipper was nick-named Lousy Whiskers. Many captains wore whiskers then as a protection against the weather, and sailors were far from polite. The nicknames they bestowed upon their "Old Men," as the captains were called, were more picturesque than pretty. I suppose to us boys the ships themselves were of more interest, and we could stand on the high banks overlooking the lake and call them all by name as we saw them coming up the lake past the Gull Light three or four miles away.

Painted white with red bottom, white with green bottom, black with red bottom, green like the Aurora—with clipper bowlike the Suffel or straight stem like the bluff old Lydon—with two or three masts, with three or four jibs, with a main topmast staysail as the Albacore carried, with square rigged foremast like the Lewis Ross and Erie Belle, sailed by Capt. Daniel Manson, with a new jib here or topsail there that would be still gleaming white, amid their weathered or coal-dusty canvas. All were different and easily recognized by our sharp and eager eyes.

I can well remember when 20 or 30 vessels would be loading lumber at the same time in Port Hope harbor, with several others lashed along side, unable to get wharfage, waiting to take their places as soon as the others were loaded.

In the fall three elevators spouted barley into their holds, and in November the men took chances with the owners and sailed for the big wages of $20 and sometimes $25 for the trip to Oswego and return. With luck the round trip would take only about 48 hours, but with a bad blow it would be a run back to South Bay, there to gather hickory nuts and steal apples for three or four days under the lee of the point. When you speak of orchard robbing at Port Burwell I must admit hooking peaches at Big Sodus, gathering chestnuts and hickory nuts at Charlotte, and other similar escapades elsewhere.

Out of the long list that I used to know there come to my mind such additional names as the Jane Ann Marsh, Ariel, Wave Crest, Two Brothers, Annie Minnes, Ella Murton, Fleetwing, Speedwell, Trade Wind, Ocean Wave, Undine, Augusta, Eliza Quinlan, Eliza Fisher, Picton, S. & J. Collier, Eliza White, L. D. Bullock, Lady MacDonald, Oliver Mowat, and a few "propellors" such as Rathbun's Resolute and Reliance out of Deseronto; the Shickluna, the Ocean, Persia and others. Then there were the R. & O. boats, the Corsican, Corinthian, Algerian and others and the good old Norseman, afterwards North King, which made daily trips to Charlotte.

I remember a race up the lake to Toronto from Oswego and Charlotte after a week's blow one September about 1887, when a dozen or more coal-laden schooners, which had been sheltering from the gale, left the lower end of the lake together. In the Suffel we thought we were winning, having disposed of everybody ahead of us, but the Speedwell got a slant off Scarborough Bluffs which we missed half a mile farther out, and beat us in through the East Gap by a couple of hundred yards.

The Fellowcraft and British Queen are familiar names, but I think they were older. You speak of the round-sterned Delaware. I think it was the Wave Crest which was the sole round sterned boat in the Port Hope fleet. The Delaware was owned in Belleville.

Do you remember when Gooderham's Oriole came back from Chicago with the big cup about 1888? I was in Toronto, and saw her triumphant entry with all her colors flying on that day. Frank Jackman was then the tug owner who did the harbor towing in Toronto Bay.

I have often heard my father speak of Captain Cuthbert's Countess of Dufferin, schooner-rigged yacht of Cobourg, and I remember we had what I thought at the time was a beautiful framed picture of her when I was a boy. Don't I wish I had it to-day!

I wish my father were alive to compare notes with you on these old days. He was in Chicago, I think with rails for some western road in his vessel out of Port Hope in 1871, in Quebec with timber later, and was one summer about 1887 freighting stone from Pelee Island to Toronto, which was then sawed into flags for sidewalks. At other times he took cargoes of salt to Chicago and picked up hickory and walnut lumber and stave bolts at Rondeau, Morpeth, Port Glasgow and other Erie ports. He carried western grain from the Northern Elevator at Toronto to Kingston, grain from Frenchman's Bay and Whitby to Oswego, moulding sand from Oswego to Hamilton, and coal from Fairhaven, Charlotte, Big Sodus and Oswego to various north shore ports. When in the Toronto trade, with grain for Mathews and coal for Rogers, the headquarters for news and mail was Capt. John Magann's, on the Esplanade, a regular sailors' post office, and I often wonder now at the changes in the Toronto water front since those days.

My father stuck to the Lake Ontario trade until about 1900, when railroad competition and the McKinley tariff had made it impossible for vessels to make a profit. To-day the once magnificent harbor of refuge at Port Hope is silting up and shelters only an odd gasoline launch or steam yacht, but on Lake Erie the harbors at Port Burwell and Port Stanley have been vastly improved because of the fishing industry and the daily trips of the coal ferries from Ashtabula and Conneaut.

You speak of the loss of the Blanche. Do you remember the little Ocean Wave which was found capsized down about the Ducks or South Bay after a summer squall? The captain's name escapes me just now, but he was a popular Port Hope man. I think he had only two or three of a crew and they were from "Cat Hollow" or a Bay Quinte port.

"I GUESS I was the last one to see and talk to Capt. Wm. Brokenshire, and his partner, Capt. Martin, of Cobourg, before the Ocean Wave was lost with all hands," Capt. Nelson Palmateer, of Cherry Valley, told The Telegram a few weeks ago. "We were in Trenton at the time in a vessel with my father and my uncle, and the Ocean Wave was finishing a deckload of headings for barrels, being already loaded to the hatches with lumber for Oswego. I borrowed their yawl boat to scull across the river and when I brought it back I said, half jokingly, "You'd better drydock your yawl boat, captain," for it was leaky and seemed in need of repairs.

"'That's all right,' said Capt. Brokenshire. 'She'll do our turn. This is the last trip Martin and I are going to make. We've a good freight on this lumber and we'll pick up a load of coal in Oswego and go home with it to Cobourg, and settle down ashore for the rest of our days. We've been partners together through a good deal of weather, fair and foul, and we're going to be partners in comfort after this.'

"Half an hour later they had the last of the headings piled high above the bulwarks, and cast off their lines. The Ocean Wave steered down the Bay for Telegraph Narrows on the way to Oswego with her leaky yawl boat on the davits for her last voyage. She was a shapely little white hulled schooner, with a straight stem. She could carry about 7,000 bushels. She was a good vessel, but crank; that is, she didn't stand up well. The load they had in her made this fault worse—the headings on deck were heavier than the lumber below.

"Something happened her-—a quick squall likely, throwing her on her beam ends. Neither Capt. Brokenshire nor Capt. Martin nor any of her crew were ever seen again after they sailed out into the lake."

When The Lumber Trade Was Good 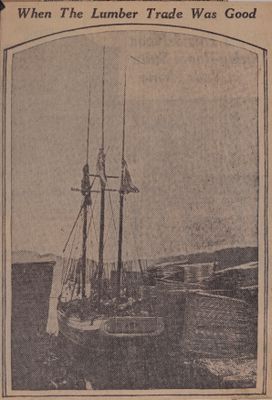