Something has already been said of the experiences of Capt. Nelson Palmateer, of Picton, that sturdy scion of a seagoing stock who has organized the send-away services in Cherry Valley annually for the Prince Edward County sailors at the opening of the season. His adventures would fill volumes. Below are given a few more, in the Flying Scud, and the Peerless, and the Nellie P. Downey; in his own words, or as closely as possible to the form in which he has related them to The Telegram. Capt. Palmateer went into steam after a long apprenticeship to sail. More, it is hoped, will be heard from him. The experiences below were in company with his brothers. They were all sailors.

"IN fifty-five years on the lakes I've had my share of close calls, but I've never been wrecked.

"She was a little clipper-bowed fore-and aft of 5,000 bushels size built at Kingston. You would know her perhaps in Toronto, for she was rebuilt at Picton and christened the Flora, and as the Flora she was owned in Toronto by the Williamses and the Thomases and others, in the stone trade. She was finally wrecked at Oakville in an April breeze in 1894, trying to get into port after the gears of her steering wheel had given out.

"She was a good little vessel when father owned her. I was fifteen when I shipped in her before the mast. My eldest brother Albert was captain of her, and my next brother, Ephraim, was mate. There were six of us in her, and a woman cook, and every last one of us hailed from Point Traverse, where I was born.

"This initiation into close calls came when we had loaded barley at Niagara-on-the-Lake and started east for Kingston. It came on to blow hard from the northeast, and Albert had to square her away and run back to Niagara for shelter.

"Going over the bar, three miles out, the waves were mountainous, and the Flying Scud would sink down into them until we felt sure she was going to the bottom of the lake without stopping. Then they would catch her and spill aboard on both sides, filling her up to the rail above decks, and soaking us waist deep and over in freezing Ontario water. I remember thinking I was pretty young to die, and what a gap it would make in the little hamlet at Point Traverse with all seven of us gone, But Albert stuck to the helm, and by the mercy of God we came through the breakers and shot into the shelter of the poplar-crowned bank and the smoothness of the river.

"EARLY in the fall of 1871 father sold the Flying Scud and she was laid up, so we boys turned to for the remainder of the season to help on the farm at Point Traverse.

"We had not been home many days before I saw a fine-looking brigantine steering up the lake from Kingston. She had a clipper bow and was painted green with a lead color bottom. When she neared Point Traverse she rounded to, clewing up her headsails and running her jibs down, anchored. The yawlboat was dropped from the stern davits, and the captain was sculled ashore, landing on the beach opposite our house. "'Are there any sailors around here?' he asked.

"'Sure, here are two just home a few days ago,' answered my brother Albert.

"'Well, I'm shorthanded, and bound for Oswego, and if you'll ship for the run over I'll pay you good wages and your fare home."

"What's your vessel? " we asked. "The Peerless, out of Cobourg. Alex Cuthbert owns her."

"'All right, ' Albert and I agreed—Ephraim wasn't there at the time—and we packed our bags and put off in the yawlboat.

"Several other vessels were lying to an anchor, for the wind wasn't fair for Oswego, and as we passed them, on the way out to the Peerless, more than one captain advised our new employer to wait for a shift, but he was in a hurry to get on with his voyage.

"Now my boy, " he told me, "I don't want you to take risks aloft, but your special job is to look after the main gafftopsail. "

"I had plenty of experience already with work aloft in the Flying Scud's crosstrees, so I thought this would be easy, but I found, soon after we got under weigh, that I had to take my place with the rest of them aloft, out on the foretopsail yard, reefing the fore topsail when it freshened. She was square rigged forward, with a double raffee above the fore topsail.

"She was lumber loaded, and she lay down in a puff until she shifted the deckload of lumber two feet to leeward, and she was over on her side with the lumber floating her. We managed to wear her around and bring the wind on the other side which straightened her up until she leaned to windward. The captain asked me if I knew the anchorages under the Main Ducks, and I told him I could take him in there, so off we steered for that shelter, re-piling the deckload as we went. By the time we had run as far as the Main Ducks the wind had shifted, and we stood back again for Point Traverse, and anchored where we had started from. Of course, we got the laugh from the other vessels that had laid snug all the time.

"However, we got to Oswego eventually, and Albert and I asked for our wages and fares home.

"'Not on your life,' said the captain. 'I'm going to Charlotte for a load of pigiron for Toronto now, and if you quit the vessel you'll not get a cent from me.'

"There we were, Canadians in a foreign port, and we had to make the best of it. So we sailed in the Peerless to Charlotte, where the old blast furnaces used to stand, on the west bank of the Genesee river, and there the pigiron was dumped into her like grain pouring out of a chute.

"Before we had lost sight of Charlotte lighthouse the Peerless began to leak, and within an hour the water stood at 15 inches in the pump well. The pigiron being dumped in any old way had strained her. All hands turned to, some at the pumps and some in the hold, retrimming the pigs, and getting at the leak. We managed to reach Toronto, and here Alex. Cuthbert, of Cobourg, took a hand in our affairs. This was the Captain Cuthbert who designed and built the Countess of Dufferin, America's Cup challenger, and many other yachts. He was a vessel man as well as a yacht builder, and he owned the Peerless, or had a share in her. He came up by train to Toronto, fired the captain, and engaged my brother, Albert, who was the only man on board with papers, to take charge of the brig.

"It was very late in the season by now, but Captain Cuthbert had a charter for the Peerless to load barley for Oswego, and we took in 13,000 bushels in Toronto and cleared. No sooner were we out than it came on to blow heavy from the eastward, and we had to turn back and run for shelter in under Gibraltar Point.

"Next day we got away again, and I got down the lake as far as Cobourg, when it came on to blow hard again, and we lost most of our sails. Albert put into Cobourg for shelter, but she was almost unmanageable, and at this time Cobourg was a hard harbor to enter, with an ugly wooden T-wharf cutting it in two. The Peerless hit the dock coming in, and was a pretty bedraggled, looking hooker by the time we had our lines out.

"That was as far as we got towards Oswego. Captain Cuthbert decided to lay her up for the season, and we unloaded our barley into Captain Geordie Williamson's schooner Star and went home to Point Traverse. The Peerless was refitted and sailed for years afterwards. I made voyages in her later when she was commanded by Captain Savage.

"MY brother Albert was a good navigator, and it was not his fault that the Peerless didn't make Oswego this time.

"One of the best bits of work I ever saw was in the two-masted schooner Nellie P. Downey, of Napanee, when Albert was mate and I was before the mast. We left Oswego for South Bay, on the opposite side of the lake, and near my own home.

We had a following wind, taut soon it started to snow, and shut in so thick we could see nothing.

"It was in my brother's watch, and I was at the wheel, when it started to snow. We were ramping along at ten miles an hour, although the foresail was all we had on her.

"'Keep a good course, for we'll never see the False Duck light tonight,' Albert warned me. 'It all depends on how close you keep her to the compass course where we'll wind up.'

"The False Ducks light was the first one we should sight on the north shore. It was on an island. Opposite that island was Timber Island. Next to that was Point Traverse, where we were born. Beyond Point Traverse, which stuck out into the lake, was South Bay, on the inside of the peninsula, whither we were bound.

"It was thirty-six miles from Oswego across to the False Ducks, so Albert figured that holding our northerly course for three hours and a half ought to bring us close to it.

"About the end of the watch, when the time was running out, the captain came on deck. It was thick, thick, thick—white on deck, black everywhere else. Albert explained to him that if we found smooth water when we changed our course from north to west after running our time and distance, it would be because we were behind Timber Island. Sure enough, we did so, and let her go west for South Bay. Fifteen minutes later we felt the full force of the sea again, as it swept in past Point Traverse, through the gap to the lake between the Point and Timber Island.

"It took nerve to hold on to that course, with the water getting rougher and the surety that, if we didn't clear Point Traverse going it blind, we would fetch up on the Point itself or on some of the shoals and reefs and points to the westward of it.

"Just when we were getting jumpy the water smoothed again, and we knew that we had picked up the lee of the Point, though we couldn't see fifty feet in any direction. On we went, booming for South Bay, a few miles further in, and all in the dark and the snow we rounded to, gave her the anchors, and lowered our snow-filled sails.

"Two hours later, when morning broke, there were the shores of South Bay all around us, mantled in the clean snowfall."

THE RELIANCE, of Deseronto, was one of Capt. Palmatier's early steam commands. She had a topmast and crosstrees and mainsail and staysail like a sailing vessel. 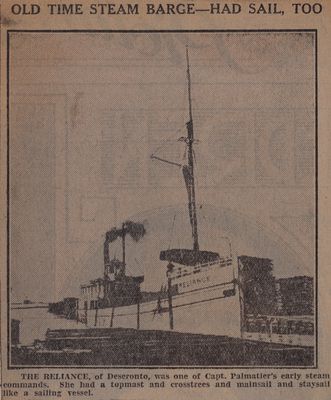