Continuing the adventure story of the Muir Brothers and their drydock, comes the voyaging of the first vessel they built on Lake Ontario and sent overseas with their own cargo.

CAPTAIN ARCHIBALD MUIR, younger of the brethren who built the Port Dalhousie drydock and ships for themselves thereat, made his will, they say, when Alexander the Great, the head of their enterprise, bade him take the "barque" Alexander, named for himself, across the salt ocean in 1858.

The same story is told about David, another of the younger brethren, when it was his turn to receive such commands concerning the "barque" Advance. It is possible that it is true of both bearded Scottish sailormen; and more than likely, in each case, that their dread was greater of incurring Alexander's wrath, in event of failure, than the Atlantic's.

The Alexander was not a real barque, with all square sails on two of three masts, but a Great Lakes variant of that rig, some square sails on the foremast, and the rest of her fore-and-aft.

The Alexander was 134 feet long, 23 feet beam and 11 feet deep in the hold; round bowed, straight-sided, almost flat-bottomed. A centreboarder, of course.

For the ocean trip the Alexander was loaded to 9 feet draught with squared oak timber, for the Muir brothers were branching out now. When they built the dock in 1850 they had to pay 75 cents cash in advance for each elm tree they felled for the keelsons. Now, eight years later, they were timber merchants as well as shipbuilders. They bought white oak by the raft, and were acquiring their own timber limits in Sombra and in the Georgian Bay and even in Michigan, to supply timber for export and their shipyard requirements.

Archibald had a hard time. A Great Lakes "barque," with her sternports leaking salt water in on the squared timber—all sternports leaked, no matter how you caulked them inside—and her centreboard threatening to buckle under her or burst the box as she rolled in the Atlantic swell! —this was not, at the best, any pleasure excursion. The family records are a bit confusing, and indicated that Archibald crossed the Atlantic certainly four times and possibly oftener, before he was through with fighting the ocean in the Alexander.

This much is certain. He got the Alexander over all right, and sold her timber to Edmundston and Mitchell, of Glasgow or Liverpool, establishing a connection which existed for years. In Liverpool the Alexander loaded a cargo of salt for Montreal, and started home with it. Possibly she completed this voyage, but in the fall of this year, or of a later one, when homeward bound on the Banks of Newfoundland, she was dismasted.

Jimmy Neil, of Port Dalhousie, an old saltwater man, who was Archibald's pilot out and back, always contended that the Alexander was loaded too deep at this time. Unfortunately, his record did not say whether it was with salt or pig iron that she was over-laden. At any rate she lost her masts and sails and had to drive all the way back across the Atlantic under jury rig, until she put into some port in Ireland, and wintered there, refitting at some leisure and more expense. Masts do not grow like bullrushes in the Cove of Cork.

Possibly while the refit was in progress—or in order to finance it—Archibald came home in the steamship Indian, which was wrecked, with great loss of life shortly afterwards. It is known that he crossed the Atlantic in her in 1859. A letter written by Samuel Muir at Hayocks, the ancestral home in Scotland, Feb. 28th. 1859, says: "Archibald Muir left for America from Liverpool; left us this night." The wording is not very clear. It may mean that on the last night of February, 1859, Archibald Muir left Hayocks to go to Liverpool to take passage for America in the fated steamship Indian.

Archibald returned across the Atlantic at some time subsequent to this steamer trip, and took the Alexander to Ardrossan in Scotland, and there loaded her with pig iron. The chronicler Samuel Muir mentions further: "On 29th August, 1860, Archibald Muir starts from Ardrossan with pig iron." This was eighteen months after the leaving for America from Liverpool. One would think that the entry refers to another voyage by the Alexander.

Still later Samuel chronicles: "On 8th April, 1861, Archibald Muir started from Ireland to America with pig iron." This might indicate even a third voyage.

It seems more probable that the voyage marked by the dismasting on the Banks of Newfoundland was this one which began August 29th, 1860, and that the dismasted Alexander, ran back to Ireland, wintered there, and started in April of the following year for home. She was certainly doing well in 1861, for her "neat earnings" for that year are set down at $7,424.28 in the brothers' books, and by 1865 she had cleared $22,354 on the lakes. She cost $13,856 to build, so she paid for herself with a comfortable margin.

Yet she was not considered a fortunate vessel by Alexander the Great, whose name she bore. The Newfoundland dismasting and Irish refit stood on his books as $8,000 loss; possibly this included loss of her earnings, for at one time he charged the loss as $4,000. In 1867 she had a run-in on Lake Michigan or Lake Huron with the "barque" Thermutus, another laker which later carried oil and staves from Cleveland to Liverpool. The collision cost the Muirs $4,000. They sold the Alexander to Detroit ship-owners. With all her misadventures she was a net profit to them. She was a good vessel.

It is significant of the mental attitude of the Scot abroad —

"Fair these broad meads, these hoary woods are grand,

"But we are exiles from our father's land"—

that although Alexander Muir and his four brothers had dug themselves so deep into Canada that they had bought forests and farm acres and built a drydock and ships and houses, they still regarded Scotland as home and Canada as some outpost where they sojourned. Alexander, in noting the adventure of his namesake vessel, recorded: "Lost her masts and sails and rigging on passage out, on the Banks; returned to Ireland and wintered there."

"Out," note you; "out" to Canada, although the barque Alexander, Port Dalhousie-built, was coming back home to Canada when this disaster befell. To Alexander home still meant Scotland, although it was twenty-seven years then since he had seen "the lone shieling on the misty island."

Captions
Second of the Muir Brothers

WILLIAM MUIR, born in Scotland, 1821, died in Canada, 1909, left the family's new home at Montreal in 1839 to join his dominating brother, Alexander, in lakefaring out of Kingston. He walked the hundred miles to Ogdensburg, where he hoped to catch the Kingston steamer, and almost gave in as he neared the port and saw the steamer about to depart. With the help of a friendly horseman he put forth a last burst of speed, and, to the shout of "Scots wha hae wi' Wallace bled!" spurted and caught the gangplank, and so reached Alexander. William Muir died just a few months before his elder brother. His son, William C. Muir, is the head of the present Muir Brothers' Drydock and Shipyard at Port Dalhousie, and his residence, named Hayocks, commemorates the ancestral farm in Ayrshire.

The Allans, of Montreal, by the way, were cousins on their mother's side of the father of the Muir Brothers. If Alexander Allan carried a gun during the Papineau rebellion it was not "for" that leader in a sense that would gratify him, one of the Muir family points out. 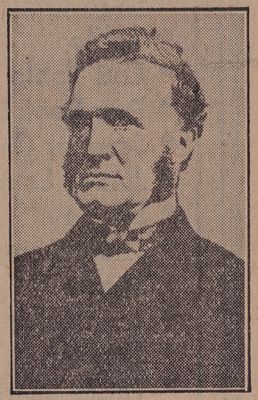