TWO WEEKS from to-morrow, on the 23rd of April, when the Prince Edward county sailors will be beginning a new season, there will be one more of those mariners' services in the little church in Cherry Valley, which have become an institution in the marine life of Canada.

Cherry Valley is as sweet a country village as can be found in old Ontario. In the centre of rich farm lands, it got its name from the groves of wild cherry trees that once made its hollows a frothing sea of bloom each April end. It is not far from Picton, not far from Lake Ontario, not far from the Bay of Quinte. It is inland, but the murmur of the waves is in the whispering of its treetops.

Cherry Valley is the summer home of Capt. Nelson Palmateer, where a neat white house has for seven years enshrined the memories of his married lifetime. He has kept everything just as it was when his wife went beyond. In the winters he lives in Picton town, six miles away.

Capt. Palmateer, veteran of the lakes for over fifty years, is the central figure in these Cherry Valley services, although the whole community participates. It was Capt. Palmateer's boyhood ambition to become a preacher. The lake claimed him, and a schooner's quarterdeck and steamer's bridge snared him from the pulpit; shared him, rather, for Capt. Palmateer became an acceptable lay preacher in the Methodist Church, and his testimony went hand in hand with his lakefaring.

Someone questioned the story in Schooner Days not long ago that Capt. Palmateer had been one of the last to speak with Capt. Wm. Brokenshire and Capt. Wm. Martin just before this pair of partners were lost in their schooner, Ocean Wave. It was not that they questioned Capt. Palmateer's word — no one would dream of doing that — but they thought that Capt. Brokenshire was lost on the Nellie Hunter, and that there was some mistake about the Ocean Wave's part in the play.

The compiler of Schooner Day reminiscences knew the Nellie Hunter was afloat long after the Ocean Wave was lost—-he had last seen her in Belleville twenty years ago, dismantled, and used as a tow-barge—but he consulted the Nestor of Prince Edward county schoonerdom, and this is what Capt. Palmateer said of the loss of the two captain-partners with their schooner Ocean Wave and all on board:

"I talked with both Capt. Brokenshire and Capt. Martin just before they left Trenton for Oswego in the Ocean Wave, on the voyage which they never completed, and they said this would be their last trip, as they were going home to Cobourg to lay up their vessel.

"Now, I will tell you what happened two years after that. I was mate with Capt. John Vanalstine in the steam barge Iona, and we were coming down from Toronto the first of December to lay up at Trenton. When we got down to the Murray Canal it was frozen up, and so we could not get through to Trenton, at the far end of it, and had to turn back to Cobourg and lay up there.

"The next spring we went to Cobourg to fit out, and we were there over Sunday, and I went to Sabbath school with a friend of mine, and they asked me to teach a class of girls about 16 or 17 years of age. When I commenced to talk, one of the young ladies said shyly, 'You are a sailor, are you not, sir? '

"I was proud to tell her that I was, and she said, 'My father was a sailor and was drowned. He was Capt. Brokenshire, of the schooner Ocean Wave.'

"Well, I did not try to teach the lesson, as I was the last man to speak with poor Brokenshire before he left Trenton, and both he and Capt. Martin were fine Christian men, and here was the daughter of one of them, hungering for any word of her father. We just talked and talked, I had known Capt. Brokenshire when he was in the Nellie Hunter, before he got the Ocean Wave, and the Nellie Hunter, as you say, lived long after him. I was in Oswego when the tug Charlie Perris came in from the lake and reported seeing the scattered deckload of barrel-headings and the wreck of the Ocean Wave, floating on her side, with no one left alive in her.

"I will never forget this meeting with Capt. Brokenshire's daughter at Cobourg. She talked of her father from a full heart. When we parted, I told her, 'Your father told me he was going home to lay up, and he has gone to that heavenly home where there will be no more sorrow nor crying, neither will there be any pain, and God shall wipe away all tears from our eyes'. "

This is the manner of man about whom the mariners' service at Cherry Valley has grown into an institution. Each year a lengthening roll call is read, of the fishermen, masters, mates, sailors, engineers, firemen "mishipmen" is the general term used), who have left good old Prince Edward county for the Better Land, whether by stress of weather afloat or sickness ashore. The service is a memorial one, as well as a farewell for those who annually do business in great waters. The roll call has grown so lengthy that this year the complete reading may be curtailed, but all the names will be lovingly remembered and recorded.

This is not the Ocean Wave, the steam barge D. R. VanAllen, one of Capt. Palmateer's later commands when he left sailing vessels for steam. D. R. VanAllen, after whom she was named, was a well-known builder and owner of fifty years ago, with a yard at Chatham on the Canadian Thames. His "castle," overlooking the shipyard, was long a river landmark. It was a round brick house or tower, built in storeys of diminishing diameters, like a wedding cake or series of cheeses of assorted sizes, set one above the other. 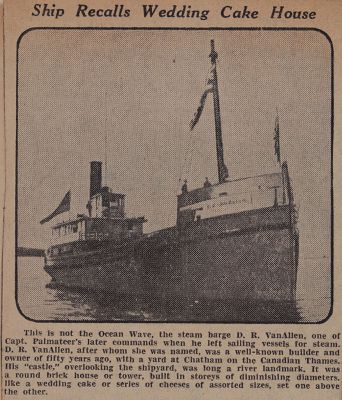