Seventy-eight years ago this Easter Sunday Port Credit was swept by its first great fire.

Seventy-eight years is a long time, and yet Abram Block, J. P., present day pillar in the Port Credit community, looks back on the Easter fire of 1855 with eyes of remembrance as undimmed as his own steadfast sailor's glance which can catch the light on the Royal York every evening, twelve miles across the lake water from his home down on the point above the old Credit River mouth.

Seventy-eight years have wrought more changes in Port Credit than they have in Abram Block. He was then a keen-eyed lad of five. He will be eighty-three this August.

The port then had its fleet of little hookers, in the wood and stone trades, but big vessels, sailing vessels, came in to load lumber and grain and farm produce, and two steamers, the Highlander and City of Hamilton called daily for passengers and freight.

Beyond the spot where the long abandoned lighthouse stands out in the lake, was a large wharf, connected with the shore by a pier. It had a warehouse on it. You can still see, under water on a clear day, the old line of its outer cribs, running in the direction of the present starch factory.

The "old mouth" of the Credit River turned westward in order to reach the lake. When the piers which have long since fallen into ruin were built, and the entrance turned to face southeast, the "old mouth" silted up and formed a basin where little hookers used to haul in. It is now dry ground.

The Point, or high land to the west now secured by a stout concrete seawall, from which Mr. Block's house faces the water, once extended lakewards for acres, Lake street, still there, turned west on the crumbled point south of Mr. Block's house, and south of Lake street again were two houses with their orchards and gardens. All this area is now out in Ontario.

Steamers did not come into the river, but moored at the wharf and warehouse out beyond the present lighthouse crib. But in the river were wharves and storehouses. Macdonald's Dock was on the west side, with storage for grain. Wooden rails were laid on it, and on these ran little trucks which held twenty-five bushels. Thus the grain was dumped into the holds of hungry schooners. There were other wharves and runways and storehouses on the east side of the harbor, in addition to the freight shed on the pier where the steamboats landed.

ON the morning of Easter Sunday, 1855, two men and two boys were sitting on the steamer pier at Port Credit, keenly watching a grain schooner beating up for the harbor against a strong southwester.

Abram Block, senior, ancestor of the Block family—the man who, in 1837, discovered the big anchor at Holland Landing, abandoned in the bush—was one of the two men at the pier end. Charlie Hare, also a Port Credit pioneer, was the other. The schooner they were watching was the Raleigh. She was a smart white two-master with a little clipper stemhead. Sanford and Moses, Cleveland shipwrights, had built her on Lake Erie in 1848. William Wilson, of Oswego, brought her to Lake Ontario, and Capt. Hamilton, of Toronto, who had the wharf near the foot of Yonge street, bought her. She registered 212 tons, old American measurement, and would carry 12, 000 bushels of grain.

It was grain she was after in the Credit, and the oldsters glanced with pride at the two "big vessels" already lying in port, eager to finish loading Peel County barley as soon as the Sabbath rest was over. Port Credit, they reflected, was becoming a harbor of great importance, with two grain carriers in already this spring and a third on the way.

One of the youngsters with them was "little Abe" Block, then five years old; now Abram Block, J, P.

All was quiet, and the watchers leaned their backs comfortably against the sunny east side of the big warehouse, sheltered from the wind. Behind them, in the river, were some 15 or 20 stonehookers, in all stages of fitting out, for it was an early spring. Beside the two vessels lying at the warehouses, ready to load grain for Oswego, there was in port a big dredge. She had wintered in the harbor and was lying upstream a little way. The peace of Easter Sunday lay over the place.

"I smell something burning," he told Abram Block. The two boys were sent to the corner of the warehouse to see what it was. Their excited yells brought the men to their feet.

"Holy smoke!" exclaimed Charlie Hare, which, considering the day and the deed, was rather apt.

Flames were streaming from a big warehouse on the west bank. A nearby business block on the "Lake Shore road" (the present Hamilton Highway) was catching, and the stonehooker fleet lay directly in the path of the fire.

"Run home, Abe, and get Jim and tell him to bring the poles!" shouted Abram Block, senior, rushing with Charlie Hare to the fire. To reach it they had to run all around the harbor and cross the old wooden bridge. It was scorching under their feet.

Jim was little Abe's elder brother. The poles were two new set-poles, fresh cut and peeled and spiked and banded with iron, which Abram Block, senior, had prepared for his little topsail schooner Ann Brown. She was lying with the other hookers up by the bridge, in the path of the flames.

Like the others she hadn't a stitch on her, which is certainly an embarrassing situation for a lady to be in when the firemen call. They had all finished painting, but the sails were down in the cabin, or up in the loft, or laid out on the grass for scrubbing and patching.

Hence the command for the set-poles.

The Blocks then lived on the east side of the river. By the time Abe had panted out his message, and Jim started on a staggering run with the long poles, the flaming shingles, sailing high on the west wind, were falling in the Block's back yard. On the Saturday Abe and the other children had gathered up all the chips in piles, a form of spring cleaning every country boy has had to share. The chip piles began to burn, and Abe and his mother were kept on the run with water from the well to extinguish them and keep the house from catching.

Across the bridge a volunteer brigade was working, tossing the water along in an endless chain of buckets, from the river to the raging fire. Murray and Cotton's store, the biggest place of business for miles around, went with all its goods, Neeson's Hotel, next door, fell a prey to the flames. Then the wharf and warehouse at Macdonald's Dock caught fire.

Through the smoke and flame the hooker men leapt aboard their little craft lying near the bridge and madly cast off mooring lines and hove up their winter-bedded anchors.

Here was confusion at its wildest, for the vessels being without sails there was no adequate means of moving or controlling them. Cast loose they became hopelessly entangled and drifted out with the river current, mainbooms fouling ratlines, bowsprits poking through shrouds, topping-lifts and headstays, until one would have thought the Archangel Michael could not get them free.

To make matters worse this raft of hookers fouled the big blunt nose of the wintering dredge when she was cut adrift, just as the grain carriers were unmooring and heaving out to kedges they had carried out in their yawl boats. The big scow, Rough-and-Ready, joined in the melee. And there at the pier ends ducked and bobbed the Raleigh, waiting to come in, having worked far enough to windward to weather the lighthouse with started sheets.

But here, too, the resourcefulness of hooker men showed itself.

"Give a stonehooker a set-pole and he'll steer through the pearly gates against a headwind" was an old Port Credit proverb, and the boys justified it now.

Thrusting their iron-spiked poles into the bottom they heaved and shoved and walked and winded their craft until the tangle split up into twos and threes and finally separated into units.

Abram Block and his son, Jim, got the Ann Brown clear with the new poles the father had cut in the bush the week before.

Charlie Hare and his helpers pried the Hunter loose—she was afterwards called the Lone Star, and Charlie often sailed her single-handed, although she would carry fifty or sixty tons.

Bob Collins extracted the old Barque Swallow with much heaving and sweating. She was such a pioneer that she had carried sand for the site of the old jail, at the foot of Berkeley street, Toronto, in 1839, and her bilges were quartered logs, hollowed out.

William Naish got the Mary Ann clear without capsizing the creek, and Tommy Blowers and the whole Blowers clan hove with might and main on the Catharine Hays, the little sloop with the outboard rudder that was their widowed mother's whole fortune. Mrs. Blowers renamed her the James Abbs when she was rebuilt and rerigged as a schooner, out of gratitude to Mr. Abbs of Parkdale, a market gardener who was very kind to her and her family.

It was really a piece of good fortune for the hooker men that none of them had so far progressed in fitting out as to have the canvas bent for the inflammable duck and flax would have caught fire under the rain of sparks and embers and wind-whirled shingles, and the whole fleet would have gone. James Cotton, ignoring his own and his partner's loss, distributed the buckets of the volunteer fire fighters among the fleet when the store was past saving and called to the boys to keep soaking their decks with creek water. This they did, and not a vessel caught fire. But they all needed new paint. The blaze stopped at the west bank of the creek for lack of fuel.

Port Credit's second big fire, years afterwards, wiped out the warehouses on the east side of the harbor and virtually destroyed the port. It never built up again. By this time "little Abe" Block was a man grown, and master of his own hooker, the Mary E. Ferguson. It was a night in the late 1880's when he was coming up the lake, and, as he changed watch with his mate, a man named Thompson, the latter drew attention to a blaze on shore. It was the big warehouses going up. This time the wind was offshore, and light, so the vessel could not beat up and make the port in time to help the fight.

Flames lit up the whole village, and Captain Block could see his new home on the point on the west side clearly, but could only hold his course and hope that it would be saved, as it was, for the fire contented itself with sweeping the busy east bank.

But that is still another story.

FIFTEEN YEARS HAVE PASSED SINCE ITS LAMP LAST GLEAMED, and the pier which it terminated has long since been swept away, but it still perches out in the lake, marooned on its solitary crib. Beyond it was the wharf where steamers called twice a day, in the times of Port Credit's harbor prosperity. 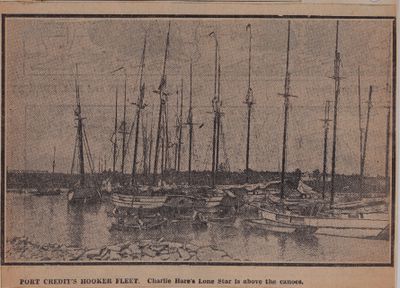