Publication
Toronto Telegram (Toronto, ON), 6 May 1933

All the vessels built by the Muir Brothers at Port Dalhousie on their own account had names beginning with "A." The only exceptions in the Muir fleet were the Niagara, which they built in the hope of selling in England—and failed to sell, on account of the salt water prejudice against the centreboard model—and the Groton, built in 1868, and Margaret A. Muir, products of the third drydock which they established, one at Port Huron.

The Muir steamers were not subject to the same rigid rule as the vessels; for one reason they were sometimes rebuilt passenger-freighters, and retained their original registered names; for another, the brothers wished to do honor to old Sam Perry, foreman in the yard for forty years, and when their first tug was finished under his direction they christened her after him.

Sam Perry, by the way, is entered as the "builder" of several of the Muir vessels, in their registration papers, because he was the boss of the shipyard crew. But the master builder of the whole Muir enterprise was the redoubtable Alexander the Great, eldest of the five brothers.

THE floating drydock built by the Muir Brothers for Port Dalhousie in 1850 prospered as it deserved, although Louis Shickluna, whose shipyard at St. Catharines was begun before the Muirs commenced shipbuilding on the Welland Canal, prophesied that the floating box would capsize with the first vessel they tried to accommodate. That little old drydock is still in existence, by the way, almost at the old stand. Its bottom serves as a rack or landing place for canoes at Port Dalhousie, close to the grand stand of the Canadian Henley course.

The drydock and shipyard prospered to such an extent that in 1866 the brothers built a second drydock, which was permanent. For this they brought one thousand oak piles, in their own vessels, and limestone for the walls from Kingston.

By this time they possessed an imposing fleet: —

They had also built their own scows and spile-drivers and lighters; they bought their own timber limits in Sombra township on Lake Huron, and in the state of Michigan and on the Georgian Bay, where they secured prime white oak and pine for use in the shipyard and for export.

They both delivered timber at Kingston, in their "barque" and schooners, for rafting to Quebec and they sent it across the Atlantic for delivery in London, Liverpool and Glasgow, in their own bottoms; and their vessels brought home salt and iron and package-freight from the Old Land for Montreal, Toronto and Hamilton. Their timber sales to one Quebec firm amounted to $59,000 in one year.

They had their own spar yard and sail loft and block factory and sawmill at Port Dalhousie; their own horses for loading and unloading the vessels and towing them through the canals before tugs were used for that purpose; and they bought a farm on the east side of the Welland canal to grow produce to maintain their families and their horses.

Through this old Muir farm the new Welland Canal comes into Lake Ontario at Port Weller. On this account an agitation has gained considerable strength, to call the new canal terminal Port Muir. The Lincoln County Historical Society supported it strongly, it would not be inappropriate tribute to these pioneers whose drydock and shipyard still flourishes.

The present drydock is the third the brothers built. It adjoined the second and used the same entrance gates. Adjoining the third dock they built a fourth for the use of light draft craft and yachts. It was filled in some time ago, and its site is part of the present shipyard.

Accommodation for yachts was an early feature of the Muir Brothers enterprise, and one of the prized photographs of the second Oriole—there have been four in the Gooderham family — shows her drydocked at Muirs’. All her family have been docked there and the Muir Brothers of to-day keep under cover a special cradle to receive Oriole IV on her annual visits for cleaning and overhauling.

The first water rent paid to the government for the Port Dalhousie drydock was £19 per annum, and the charge has grown to $1,000, although what the Government has to do with furnishing the water, other than allowing the rivers to run and the rain to fall, is not plain. The water comes through the old Welland Canal and goes back into the old Welland Canal.

Twenty-three years ago, when the lake level was very high, the water backed up the dewatering drain and covered the floor of the drydock. Alexander and William, the two surviving brothers, then nearing their nineties, and weary of their work, wrote to the Government that their drydock was "a wet dock now and we do not want to pay water rent any longer. They offered to sell the dock to the government, but it remains a private and aggressive enterprise.

About 1880 the first iron work was done in the dock, when the steamer Campana, brought up the St. Lawrence canals in two pieces, was reassembled at Muirs’. The steamer Chicora, which had first been used on the Upper Lakes, was also brought from Lake Erie and put together on the Muir dock. About that time the propellers Acadia, California, Armenia, Cuba, Scythian, and Alma Munro— wooden vessels—were cut in two on the Muir dock and had 40 feet built into them amidships, to lengthen them to the full capacity of the new locks of the then enlarged Welland Canal.

In 1868, continuing to branch out, the brothers established another drydock at Port Huron. Here they built the "Barque" or topsail schooner Groton, possibly for Chicago clients. She was registered in Chicago, either at this time or soon afterwards, and traded out of that port.

Here too appears to have been built the three-masted schooner Margaret A. Muir, named after David Muir’s wife.

After the establishment of the Port Huron drydock there was a division of the interests. David and Archibald took some of the vessels and the Port Huron dock and yard. The Acorn, a fine large "barque," which had been sailed by William Muir as master, was given to Archibald in this division, and the Advance fell to David, who had taken her to the Old Country. Alexander, Bryce and William continued to operate the Port Dalhousie drydock, Bryce being frequently in Quebec superintending the timber sales and shipments abroad.

At Port Dalhousie were then built: —

These schooners have long since passed out, after the Muirs sold them. The Albatross was stranded in Georgian Bay in 1905, and her bottom was used as a lumber barge, after doing duty as a houseboat. The Albacore was wrecked at Oswego, Sept. 12, 1900, in the blacklash of the Galveston hurricane. The Antelope and A. Muir were dismantled barges, at the Point Ann quarries, in 1917.

Archibald Muir was drowned in Lake Huron, in the loss of a vessel in which he had gone as supervisor or pilot, after retiring from active lake faring. He was 59 years old when the waters claimed him after braving them for forty years. "Archie—mother’s playmate" is the memorandum on the back of the old photograph here reproduced — a description which even the mutton-chop whiskers of the grown man do not contradict. Archie was the youngest and the mellowest of the Muirs, apparently.

It was he who took the Alexander across the Atlantic, and got dismasted on the return voyage. He had hard times at sea and on shore, between the rage of the elements and the wrath of his dominating elder brother. But his eyes never lost the merry twinkle of "mother’s playmate. " 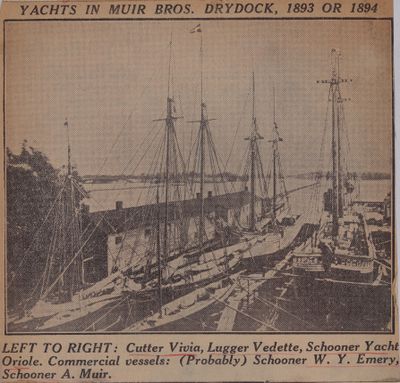