There is a story with whiskers on it that a certain sea captain once picked up a turtle swimming in the sea off the Galapagos, and on the turtle’s back was a cuneiform inscription, translated by the ship’s doctor as follows; —"SHIP ARK, NOAH, MASTER, ARARAT, FOR ORDERS." This tale is usually cited, not by fundamentalists as a proof of the literal accuracy of the first book in the Bible, but by zoologists as an indication of the great age to which turtles attain. Be that as it may, there really was a craft named the Ark, and she sailed on Lake Ontario, as you shall hear.

Allthe Muir schooners had names beginning with "A." There were, as already mentioned, exceptions in the cases of the "barques" or other craft built for registry abroad, like the Niagara, which they hoped to sell in England. But for their own vessels the brothers began with the name of their native shire in Scotland—Ayr. It was short and easy to paint on the bluff black bows of their first fore-and-after, launched in 1855. They ended with the Ark which was also short and still easier to paint, for the Ark had a bow on her almost as blunt as a brick wall.

Between Ayr and Ark the boys had been hard put to it for names beginning in "A," this being in the pre-crossword puzzle age. They dutifully chose Alexander for their second vessel, doing honor to their elder brother and dynamic chief of their enterprise. After they had used up Arctic (which they spelled with a final "k" in 1858), and Advance, and Acorn and Asia, and Albatross, and Albacore and Antelope, they were rather in the same boat with the sailors who evolved the alphabet chanty, and had to lump the last letters, as you may observe. So they fell back on Alexander the Great again and christened the next schooner the A. Muir. It preserved the apostolic succession of A’s, if it did have to stretch the alphabet.

They launched the A. Muir in 1874. She was the last schooner they built, for they were foreseeing men, and even in the 70’s the schooner trade was beginning to be less profitable. Next year, like Noah warned of what was coming, they built them an Ark and took refuge therein.

The Ark was not a schooner, but a barge. She had three masts and four sails, but she was built for towing.

Very much so. Every unit in the Muir fleet was a grand carrier, for their vessels were never intended for yachts but for dividend-payers, and every additional ton meant additional dollars in freight money for a voyage.

But if the full-bosomed, wall-sided, hard-bilged, broad-sterned pioneers of the "A" fleet looked plump and portly beside lean-lined racers, they were as slim as the Cutty Sark herself compared to the gallant Ark.

Their bows were blunt. Hers was almost square. They fitted the locks of the old Welland Canal snugly. She overflowed all but Lock I. which let her out into Lake Ontario. They staggered when bearing a dead weight of ship and cargo, eight hundred tons. She just creaked when they piled fifteen hundred into her. She was 175 feet 6 inches long, 35-foot beam, 10 feet deep in the hold, registered 521 tons and carried almost three times as much as she registered.

The Ark couldn’t get farther up the old Welland Canal than Lock 2 but this was no mistake in calculation. She was deliberately built that way, discounting the not-distant future when the canal would be enlarged.

The Muir brothers saw that the biggest schooners which would go through the existing locks, would be unprofitable when larger locks brought larger vessels into competition. Whether it would long remain profitable to operate large and larger schooners, with large and larger crews,

and wage rates always rising, was very much in doubt. Weather wise, they scented afar the rainstorm of steamboat and railroad competition which was going to deluge the schooner trade. They got into their Ark in time.

She was too bluff and clumsy to navigate under sail alone, even if they could have got a rig big enough for her; so they got the steam-barge Albion to tow her.

The Ark lay in the pond above Lock I. at Port Dalhousie, at the Ontario end of the Welland Canal, and the Muir animals came in two by two—Antelopes and Albacores, Albatrosses, Arctics and so on, from the upper lakes—swimming deep with cargoes of square timber or lumber or wheat or corn or oil, and whatever they could wriggle through the canal. The Ark swallowed everything that came along, just like Noah’s vessel.

When the last item from the Acorn or the A. Muir was aboard the Albion gave a toot, the mooring lines were cast off and away swung the Ark behind the steam barge, out into Lake Ontario, down the river, through the St. Lawrence canal, across Lake St. Francis and Lake St. Louis and so to Montreal, with the cargoes of two schooners under hatches every trip.

That was the program as the Muir brothers planned it, while the little old second Welland Canal was in operation. When the "new" third canal—now also an "old" one-—came into being, the Ark and the Albion would get their slice of the Upper Lakes trade which had hitherto been confined to schooners small enough to get through the locks or large Upper Lakes carriers which could only come down as far as Buffalo or Port Colborne.

It was a good program, and it worked, but like all the best laid plans of mice and men it went "aft agley."

The Ark was no angel to steer. She couldn’t be anything but hard-mouthed, with her square shape and, for the time, enormous displacement. Although she could carry twice as much as the schooners of the "A" fleet, she cost only $15, 000 to build, and they had each cost that much, or perhaps another $1,000, on the average.

The Ark was fitted with comfortable cabin accommodations aft, and members of the Muir families often made enjoyable leisurely summer excursions in her, between Port Dalhousie and Montreal, behind the panting Albion. Forward she had a forecastle deckhouse, so as to give her the maximum space under the deck beams. Capt. McCannel has a story of hosing out that deckhouse and the consequent destruction of life which reads like an added diluvian chapter of Genesis. No matter how smartly lake craft were kept at the after end, the forecastle was apt to develop biological specimens, surprising alike in number and ferocity. Soap, water and cedar boughs were in constant requisition to readjust the balance of nature.

Bills for collisions, strandings and parted towlines cut down the profits on the big freights the Ark and the Albion earned.

Neither could be called a lucky vessel. The Muir brethren envied Noah’s inexpensive stranding on the original Ararat. The Ark was finding Ararats all over the lakes. It cost $2,000 to get the Ark off when she touched bottom in Lake St. Francis; it cost another $4,000 to free her when she scrubbed an island at Edwardsburg. Being so full and flat she had to have her cargo jettisoned into lighters before tugs could help the Albion budge her from the bottom; and lighters are about as economical to call in as plumbers.

When the expected enlargement of the Welland Canal did take place, and the Ark went "up above," as sailors called entering the Upper Lake trade, the profits on her labors were greater —and so were the wrecking bills.

She got ashore at Port Colborne, parting the towline coming in, and it cost $4,000 to refloat her. She whacked an Allan Line steamer when the Albion was trying to manoeuvre her in the basin at Montreal, and paid another $4,000 for the privilege.

The Albion herself was far from fortunate. She got on fire at Valleyfield, in the St. Lawrence, and had to be towed back to Port Dalhousie for rebuilding, at a cost of $10,000. Soon after that had been accomplished she got ashore near Grindstone City, Lake Huron, with the Ark in tow. It cost $5,000 to get the Ark off, but the Albion was a total loss, written off at $15,000.

Alexander Muir was so upright, in the light of his time, that he would not carry insurance on any of the vessels or plant of the drydock enterprise. He considered this would have indicated lack of confidence in the Lord, who had said to put his trust in Him.

There is a challenging pathos in the list of "losses by fire and water of A. Muir and Brothers, since they commenced business at Port Dalhousie in 1850," prepared by the old man in 1910 at the end of his days. The total is $196,000. It is not an exceedingly high figure, in a hazardous enterprise extending well over half a century; but it would have been materially reduced by insurance, even after paying all premiums.

To the glory of the grand old patriarch be it recorded there is not the slightest hint of whining for sympathy, either from the Lord or his fellow men, for following what he considered to be the dictates of his conscience.

How careful Alexander and his brethren were with the bluff-bowed, hard-mouthed cargo carriers which they built and navigated is shown by the fact that the total among the "losses" for damage to canal locks and abutments during the sixty years they were using the Welland Canal with their fleet is only $400!

The Ark was eventually "sold down the river," said river being the St, Lawrence, and was last seen in the vicinity of Quebec being towed along with a most appropriate cargo on deck—mooing cows and calves, bellowing steers, bleating sheep and squealing pigs. She is still on the register owned by the Montreal Lighterage Co.

So many have been asking for the "Alphabet Song" that it is here given, as dug out of the lockers of memory. Here on the lakes it used to go to a tune similar to "Vilikens and His Dinah", which parodies a still older song. The highest peak of the alphabetizing is "G" for jewel-block. It is almost as good as the answer Julius Olsen gave at the shipping office when asked his initial. "U", he said, "U, for Yulius."

A is the anchor of our gallant ship

B is the bowsprit, so neatly does fit.

C is the cathead from which it is hung

D is the davit from which the boat’s swing.

Give sailors their grog and there’ll nothing go wrong.

E is the ensign that from the peak flew,

F is the forecastle that holds all the crew,

G is the Jewel-block that hangs at the yardarm,

H is our hawser that saves us from harm.

I is the irons our stuns’l booms get

J for the jib that so neatly doth set

K is the keelson way down in the hold,

L for the laniards, be they new or old.

M is the mainmast, so stout and so strong,

N is the needle that never goes wrong,

O for the oars of our jolly-boat,

P is the pennant so neatly does float.

Q is for quarterdeck, built stout and strong,

R is the rudder that guides us along,

S for the sailors, I have heard said.

Never mind sending in "corrections". I have often heard this song, but never twice the same way.

WHERE THE ARK TOOK ON HER CARGOES

Muir's Pond at Port Dalhousie in the 1880's, after the Welland Canal had been enlarged. The small black schooner in the foreground is the Antelope, lying at Muir Bros, sawmill and sheer-legs for fitting out. In the pond lies the Ark, newly caulked. In the background are three steamers, the Clinton, Acadia and Modjeska, and two flour mills where the large brick rubber factory was later built in Port Dalhousie. 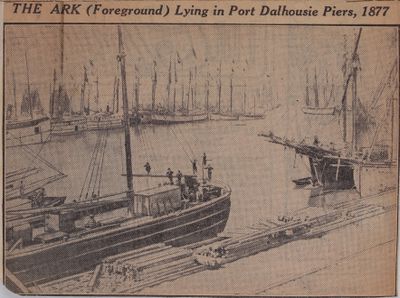 Where the Ark took on her cargoes
Groups of Related Records