That’s what the older folks call the Bluenose down home in Lunenburg, although it is as much as your life is worth to try to mimic the pleasing local accent. Lunenburgers are, quite unnecessarily, sensitive about the traces of Hanoverian ancestry which crop out inevitably in the speech of the older generation. There is no reason why they should be for the Hanoverians who settled Lunenburg in 1752, and named the town after their native Luneburg (with the N left out, please notice) were sturdy, loyal subjects of George II., who was King of England and Elector of Hanover and Prince of Luneburg at the same time. The White Horse of Luneburg has its place in the royal arms on the standard captured by the Americans when they took Toronto in 1813.

Everybody in Lunenburg has traces of the same Hanoverian trick of speech, whether their ancestry be High or Low German, English. Irish, Scotch or French. Huguenot descendants are as much affected by it as Gaelic highlanders transplanted from Cape Breton. We all like to say "wessel" for vessel and "stone" for stern and "wanish" for varnish when we relax.

It is a trick of speech for which no apologies are needed, for the men and women of Lunenburg are the salt of the earth, as well as the pride of the sea. This long explanation is offered not in apology but for the benefit of those who in their innocence might think that the title of this little article was just another typographical error. Article No. LXXXIX is about The Bluenose, to offer some contrasts and comparisons between the visitor of this week and the hundreds of lake schooners which crowded our wharves "even in our time."

IT IS exactly forty years since Toronto Harbor has had as novel a visit from a sailing vessel as was the call of the Bluenose this week.

In June, 1893, the three replicas of Columbus’ caravels, built for the Queen of Spain and presented to a more or less grateful American people (who declared war on Spain five years later) came to Toronto and anchored in the Bay off Island Park. Like the Bluenose, they were on their

way to the great fair in Chicago; only their’s was the "Columbian Exposition," alias the World’s Fair. The caravels had crossed the ocean and come up the canals, and were spick and span in shining paint and shield-hung bulwarks and royal standards and pennons gay. Toronto swarmed to see them, in skiffs, canoes and ferry boats, and everything that would float did a roaring business. Twenty years later the caravels came back here, dingy and decrepit, all that was left of them. They had all three been sunk at Chicago, and the Pinta was left there, and the Nina and Santa Maria were doing one-day stands for some exhibition company. So passed the glory that was Spain’s, the grandeur that was the U. S. A.

When the caravels first visited Toronto we were still in schooner days. The era, if past its peak, was still flourishing. Twenty or thirty schooners wintered here annually, strung long the waterfront between the old Queen’s Wharf and the drydock of the Don. But now schooners are such a novelty that dozens of wise guys enhanced their reputations for omniscience by declaring that the Buenose’s tapering masts and cobwebs or rigging were wireless.

Old-timers gasped at the slimness of this black-hulled beauty. "She’s a ya’t, not a vessel," snorted the last hard-fisted graduate of the boar-pen.

"Just a racin’ masheen," commented another.

"Where’s her nets? " demanded another. "How can she fish without nets?"

All wrong, all of them. Salt-bankers don’t use nets. They catch the cod on trawls, which are lines of hooks, anchored on the feeding grounds. The trawls are hauled and set from dories, little sharp-ended flat-bottomed boats which nest in the waist deck of the banker like saucers in a cupboard, when not in use. Two men man each dory. Bluenose fishes with eight or ten dories, and a total fishing crew of twenty-two.

There was a very good working model on board the Bluenose. It showed her in miniature, riding to anchor under "bank sail" with her flocks of dories around her, their stations all marked by their black trawl buoys and their two-men crew's hauling and setting. There were even fish in this tank model, but they had to be models of the bigger "game"—swordfish, porpoises, etc.

And the critics were all wet about the racing machine idea. If ever there was a hard-working fisherman on the Banks of Newfoundland or elsewhere it has been the Bluenose. She has been high-liner in dividends and high-liner in catches. That means that she has, on several occasions, brought in more fish than any of her rivals. She has fought for her life in the perils of the shoals of Sable Island through a hurricane, and won out when other staunch schooners went down. She has taken the rough with the smooth, and made winter voyages to the West Indies after fishing all summer. A vessel has to be more than a "ya’t" or a "racin' masheen" to do that. But on top of this Bluenose remains the undefeated champion of the North Atlantic fishing fleets, though she has met every vessel, Canadian and American, that has ever had any ambition for that honor.

But the old-timers were right about her being slim. She is pared away like a canoe at both ends. The "old canallers" among the lake schooners were almost the shape of the locks of the second Welland Canal, which they were built to fit. They were almost flat on the bottom and sides, almost round in the bow, sometimes quite square at the stern. While 257 tons of dried fish is the heaviest cargo Bluenose has ever carried, those old wooden wagons used to tote 22,000 bushels of wheat or 750 tons of coal.

Yet their dimensions were almost the same. The average "old canaller" with her two or three masts and from eight to a dozen sails ran to 136 feet on deck, 23 feet 6 inches beam, 11 feet depth of hold and 11 feet draught. It was a surprise to many to discover that this slim "little looking" Bluenose, with her low waist and high-curved sheer and two tall spars was really bigger than the "big fellows" of old time—in dimensions. She was 143 feet over all, 27 fee beam and 12 feet deep in the hold and when in racing trim she draws almost 16 feet of water. She had to be lightened up to 14 feet or so for the passage of our canals, but even as she floated at the Harbor Commision’s wharfage she was drawing more water than any of our old "three-’n'-afters" did. And yet they carried three times her load!

Our old lake schooners seldom use ballast. Bluenose always does. When she races she takes on board a hundred tons of pig iron. When she fishes she heaves out the pig iron before starting and loads up with an equivalent weight of beach stone. As the fish come in the stone goes out because the wet fish, green-salted make good ballast, and she may come home swimming scupper-deep with fish and all the rocks left behind her out in the ocean. They say the salt bankers have formed shoals on the Atlantic bottom as high as house tops with the ballast that they have thrown out.

Bluenose’s two masts were loftier than any of the three masts of the "old canallers, " but it was her main boom which really gave the old lad heart failure. Eighty feet of solid timber, 15 inches in diameter, swinging in its saddle, supported by the stout "end lift" and two inboard topping-lifts! Like the Parliament Buildings flagpole on a rampage! About the longest mainboom Lake Ontario schooners ever saw stopped at 70 feet; even big fellows like the Albacore and Antelope had 67-foot booms. The Bluenose’s mainsail, 50 feet on the gaff and 80 feet on the boom, is the mightiest Lake Ontario has ever encountered. Twenty men have had a hard time rolling that sail up and gasketting it.

In many things Bluenose differs from our old lake schooners, but in nothing more than her forward sail-plan. They had three, four or five triangles of jibs, sprouting out, one beyond the other, on a bowsprit and long jibboom, until the outermost was 60 feet or so from the foremast. Bluenose has at most three, and for working purposes two, headsails; a "jumbo", well inboard, inside the stem, of heaviest canvas, a storm sail; and beyond it the jib proper. Above it a jibtopsail, called by the fishermen a "balloon", is set for racing only. She has eight sails in racing rig and five for fishing.

On the Banks the Bluenose does not even send up her fore topmast. Her working sails there, or suit of overalls, are the jib, jumbo, foresail, and trysail, or bank sail, a three-cornered sail set in place of the heavy mainsail. The latter is unbent and kept in the hold, until it is time to swing her off for home. This allows the huge mainboom to rest amidships in its crutch, with the gaff lashed to it. The bank sail is loose-footed. The maintopmast is left aloft, and from it is set the square maintopmast staysail, down to the foremast head, which is known to yachtsmen as a "fisherman". It is always set flying from the deck, and is not hanked or snapped to a stay. As the main gaff is not used on the banks there is, of course, no main gafftopsail. Bluenose’s bowsprit, perked up in line with her sheer, is only 20 feet outboard—a great contrast to the 60-foot nosepoles of the old canallers.

They all had centreboards. Bluenose has none. That is one reason, why she draws so much more water— about 30 per cent. —than they did. They were kept shallow, so as to pass the canals. She is built deep, for the steep seas of the Atlantic. They were given centreboards to keep them from drifting to leeward. She is kept on her course by a long flat keel, deep down in the water; just a wooden shoe, about 60 feet long in the straight.

"SALT BANKER" — THE BLUENOSE, built in Lunenburg in 1920 at a cost of $35,000; 143 feet on deck, 27 feet beam 15 feet draught; low in the side but capable of winter passages to Porto Rico (where she has gone several times) and of riding out Atlantic gales at anchor. 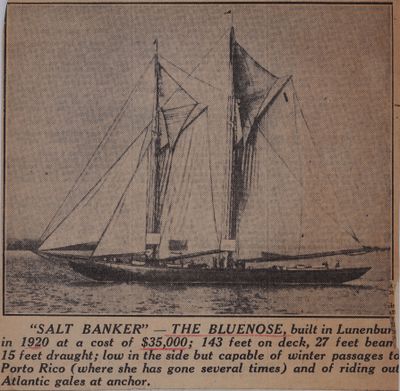