How its faraway influence worked out in the operation of the famous Muir Brothers' drydock at Port Dalhousie.

ALL the Muirs were Presbyterians.

They had Covenanting blood in their veins. In Scotland one of the brethren solemnly rose in his pew when the timid new minister announced that they would now sing one of the paraphrases, and informed him: "Young man, this kirk is no' yet weary of the Psawns o' Dawvid."

Prelacy and pipe organs were alike an abomination unto Alexander, who founded the drydock and shipyard, and the young lady in Port Dalhousie who was collecting for a "kist o‘ whustles" for the new Anglican Church in the village quaked when she approached the leading citizen of the port, Alexander Muir.

"How much is So-and-So giving?" asked Alexander bluntly, naming the Anglican head of a new business enterprise upon which he did not look with favor.

She did. And he did.

Alexander was a teetotaller. Not always. But as a young man, on a Sabbath morn in Kingston, as he lay on the lumber piles, there came to him the vision of what ravage liquor wrought in sailors' lives. While the church bells were ringing he made his resolve, and never afterwards did liquor pass his lips.

Years later, while he was lying in Kingston unloading a cargo of timber from Port Dalhousie, there came a shipper desirous of chartering his vessel for the return voyage. That was what made money in schooner days—cargoes both ways—and captains always jumped at the chance of "double freights." The shipper offered a cargo of staves for St. Catharines, just three miles up the canal from Port Dalhousie.

"And where will we unload?" inquired Alexander.

"Right at the new brewery dock; the staves are for the brewery cooperage," explained the shipper.

"I'll no' take them," said Alexander shortly. He sailed all the way home with an empty hold and a full wage bill.

He was as strict a Sabbatarian as he was a teetotaller. (Incidentally, the Bluenose, which lay near his drydock last month, on her way from, Nova Scotia to Chicago, never fishes on Sunday and has never gone rum-running, although offered $5,000 a month to lie on Rum Row.)

When the Muir brothers built their drydock, the Welland Canal closed regularly, from Saturday night till Monday morning; indeed, it is only in "modern times" that it has been open on Sunday, and this began with the supposed necessity of locking the grain laden fleet through towards the end of the season without interruption, day and night. Drydock jobs are generally considered in the nature of emergencies, but no emergency was great enough to make Alexander allow the Sabbath to be broken.

One of the Hamilton steamers— probably it was the Modjeska, shown in the picture—docked on a Saturday, after her regular run, to ship a new propeller and complete some under-water work. Knowing the rigid rule then prevailing, the owners sent along men of their own to complete the work after midnight Saturday, should it be necessary,

Alexander was interviewed about letting the drydock crew continue and sternly forbade it. When midnight struck, his employes did the same. They knew better than to disobey his orders. But the steamboat crew and their fitters and rivetters went merrily on by torchlight. Suddenly a night shirted figure appeared in the doorway of the Muir home, which stood on the high bank above the drydock.

"Da ye no' ken 'tis the Sabbath?" demanded the great voice of Alexander, rising above the roar of the rivetters and the clank of the hammers.

The work continued, without interruption, and Alexander, night-gowned and lantern lighted, descended the stairs and strode to the dock gates A twist of his good right arm, and the valves opened, and the Welland Canal rushed in, filling the dock so fast the workmen had no time to pick up their tools. There was no more work done till Monday morning.

MODJESKA' ON THE MUIR DRYDOCK IN THE EARLY '90's

This picture of the drydock shows the original storehouses and office (later burned) alongside the dock, With permanent wooden staging between the second and third drydock which the Muir Brothers built. The base of the old dismantled floating drydock, the original of 1850, is shown floating outside. 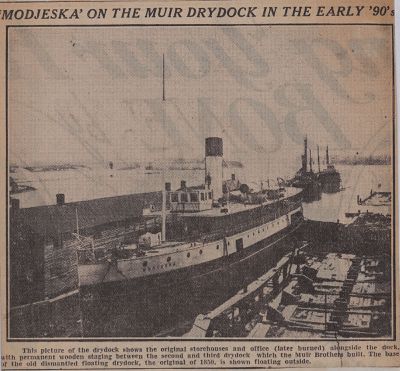