ALL his life a dollar looked large to Alexander Muir. Every dollar he had came with the sweat of his back as well as his brow. But he was generous.

Capt. John Williams tells how, sixty years ago, he went sailing with two Cornishmen, Richard and Thomas Curphey, in the. little Mary Ellis. Fifty tons dead weight would sink her, but they loaded lumber here for Oswego in the fall of the year—and got there. They were hove to in a snowstorm for hours, under the close-reefed foresail. The entire crew, the two men and the boy—he went as cook and general helper—huddled together in the tiny cabin, hanging on to the standing table to keep from being rolled into the bunks to port and starboard; no sound except the wash of the seas over the deckload of lumber outside, the swish of the snow into the reefed canvas and the grinding of the helm lashed a-lee. The schooner, hove to, was sidling down the lake on her own.

At last Dick Curphey said: "Us must be nigh there, Tom."

So up into the wind and snow the three tumbled, gave her sheet, and hove the helm up. Almost immediately Oswego light loomed ahead; a marvellous example of the instinct of those Cornishmen for knowing where they were. They popped into port, unloaded their lumber and loaded salt for Hamilton. And they got there, although they had to put into every port on the south shore on the way up.

But that was better than did most of the big fellows. Seventy large schooners were lying windbound in Oswego when the Mary Ellis ventured out, and some of them lay there all winter, for they waited for fair weather until they were frozen in.

Where Alexander Muir comes on the scene is just before this. The Curpheys had taken the Mary Ellis to the Port Dalhousie drydock in the spring and told the Muir Brothers, "She needs this, that and the other, but we've only so much saved up and we hope to earn so much more this summer, and that's what we want to spend on her. Do what you can for so much, but don't ask us more."

The Curpheys were sailing in vessels for wages—Richard was master of the New Dominion, and of the Clara Youell afterwards—and at the end of the season they returned to Port Dalhousie to see how their Mary Ellis had progressed.

The Muir Brothers had practically rebuilt her.

"You might as well keep her, Capt. Muir," said both Curpheys, ruefully, "for with all we've saved this season, and all we had ahead, we can never pay you for so much work as this."

"Lads," roared Alexander, "a thing weel done is twice done. She needed a' this wark. I mind weel what ye said ye could pay. Pay us that, and tak' the vessel, and gude fortun' follow ye."

When the Mary Ellis was butting her way through the snowstorms between Hamilton and Oswego the Curpheys thought on these things and praised the works of Alexander Muir before their neophyte, John Williams, now Master mariner, retired.

Long years after the snowy voyage in the Mary Ellis, John Williams was master and owner of the schooner Sir C. T. Van Straubenzee, and put her on the Muir dock for bottom cleaning and tallowing. Thrifty and industrious, Captain John himself went on with the grimy job after the whistles blew, cheering himself for the smell of the tallow and the overtime work by a fragrant blast from his good clay pipe.

As he smoked and toiled like Vesuvius in eruption he was aware of a giant figure leaning over the weather wall, and heard a deep booming voice descending into the innermost recesses of the Straubenzee s bottom, it announced: "Young man, if the Almighty had intended men to smoke He would have provided our heads with chimneys. Yin spark o' yon pipe might burn the bonny schooner."

It was Alexander the Great himself. He carried his teetotalism even to barring tobacco—especially when it menaced his own property and the property of a client. He had had a $40,000 fire in his drydock, and lost the outfits of seven schooners and the accumulated models of a lifetime of building. So he was careful.

There Were Schooners Great and Small,

And the Tugboats Helped Them All"

[Handwritten: Arthur towing out of Toronto, 1908] 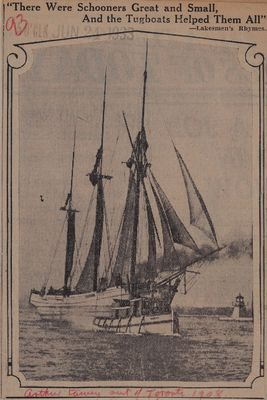