Relieve the man for'ard and look out for lights and squalls. It is the Old Man's watch below and the Doctor takes a trick at the wheel.

IN the not-very-good old days when dwindling fleets of sailing craft were still components of the Great Lakes marine, the wages of "schooner men" ran to about double the pay of steamer deckhands, in the summer months. In the fall, if freights were good, any man who claimed ability to reef, hand and steer was very much in demand and might be paid five or six times as much as the best deckhand on the lakes.

The lake sailor in need of a job was wont to approach the old man or the mate of a schooner with a casual query as to "chances for a site," or whether he "had all his crowd." Other forms of requests for berths in lake vessels were regarded as indicating lack of experience or at least a lack of familiarity with lakewise usages.

Frequently a lakes schooner mate was forced to make a long canvass of waterfront saloons to fill out his vessel's complement. Sometimes he recruited a member or two of his crew from the local calaboose by arrangement with police or magistrate. Schooner men were often shipped from Seamen's Union offices, but seldom or never from the Assembly Halls conducted by the welfare department of the Lake Carriers' Association.

It is a legend of the old Buffalo docks that Captain Willyum Tammas Alan, of Port Dover, advised his son, Young Bill, to "Gang oot an' comb the bar-r r-rooms an' get anither mon. We canna sail wi' oot yin. An' gin ye canna find a sailor, ye'll hae to ship an Irishman."

Not always did berths go begging in lake schooners. Sometimes there were more sailors than sites and any chance to ship was not only acceptable, but eagerly sought after.

Until the first years of the present century a majority of the wheelsmen and watchmen employed in lake steamships had formerly served in sailing vessels and were prone to regard deckhands and firemen with the contempt that for ages has been common to sailormen in their contacts with lobsters.

When Young Bill Alan was master of the fore 'n' after Erie Wave he shipped Abe Farrel in his forward crowd for the run from Cleveland to Windsor with soft coal. Abe was a noted handy man as well as a good sailor, and on that trip he acquired a nickname, Cutbrogues, by which he was known for the rest of his life. A thrifty soul was Abe. He had purchased a pair of "top boots" in Cleveland at a bargain price, and, regardless of their awkward fit, he wore them on board the Erie Wave.

A northwesterly breeze headed the Wave off when she was half a day out and after a couple of hours of shifting and box hauling, Young Bill Alan decided that he would have better luck closer to the north shore and stood in on a chance of picking up a land breeze that might help him up the lake.

He got it all right. A stiff half a gale of it abaft his starboard beam, and Bill felt so good about it that he held on to a lot more muslin than the poor old Wave could drag with any degree of comfort to herself or anybody else. She opened up and leaked like a seive.

THE mate advised dubiously, "I guess you better shorten her an' nose her in somewhere. It don't look to me like them men is gonna keep her clear with the pump.

"It don't look to me like they are either," Young Bill concurred. "And I'm certainly as Hector not gonna give them a chance to prove it. We'll nose her in somewhere all right, but she won't be shortened none. We'll keep right on swingin' all the cloth we've got so's to make it short and painless."

The breeze freshened. The Erie Wave labored harder and leaked more. "Them men" worked harder at the pump and their weariness increased apace. The water gained on the pump and the overworked pump eventually refused to function further.

"The suckers is played out of the valves," a frantic sailor wailed. "Holy mike! She'll sink in half an hour and we'll hafta buck this sea in the cockeyed yawlboat."

"Not so nobody'd notice it, you won't" Young Bill contradicted hotly. "She ain't gonna sink and you ain't goin' into no yawlboat. I said we're gonna get this here vessel in somewhere, didn't I? And that's just exactly what we're gonna do."

"There ain't no leather on board to make new pump suckers with," the mate objected.

"You're as nutty as a beech limb in October," Young Bill scoffed. "There's leather on board and that no good lump of a Abe Farrel is the man that's gonna put it to some use. Abe, you low, degraded alms box robber, you can fix pumps better'n any man on the lakes. Cut the tops off them new boots of yours and have at it."

Abe ever had an eye to the main chance. "Them boots is a special make," he demurred. "They cost me four dollars. They're made outta genuine --er—a giraff skin."

You're the worst single-handed liar unhung, Abe Farrel, and them boots is cowhide," Young Bill accused wrathfully. "But even at that I'll give you four bucks for them, to fix the pump suckers. Go to it."

"Kin I have what's left of the boots?" Abe bargained as he set to work.

"You can take a runnin' jump into a kettle of boilin' taller with them as soon as you get that pump fixed," Bill assured him.

Abe sacrificed segments of his boot tops to replace the worn leather of the pump valves. All hands turned to again on the brakes, and the outraged old Erie Wave was kept afloat long enough to slide up on a mud bank in a friendly creekmouth lagoon.

Abe Farrel wore his abbreviated boots for many months after the Wave's escape from a grave at the lake bottom, and thus earned his sobriquet, "Cutbrogues."

"We went to Blackrock to load coal for Fort William," Captain Dolph told the story. "Wages were sky-high at Buffalo just then and my crowd quit as soon as we were alongside the dock.

"I sent the mate uptown to look for more men. He came back pretty soon with a few drinks under his belt and with four men and a knock-kneed boy in tow. The boy said his name was Gilbert Throckmorton Featherstonhaugh and maybe it was. I was suspicious of the mate's picking up a crew so easily, and particularly suspicious of their not having their bags with them. They had a meal on board and the four huskies went ashore, saying they were going after their bags. Gilbert Throckmorton Featherstonhaugh stayed on board.

"'We won't see those wallopers again,' I told the mate. 'Better drift up town again and root out some more.'"

"He was just going ashore when two drunks started to climb on board. One made it over the rail. The other fell into the drink. We hauled him aboard and laid him on the forward deck to dry out. He was all in.

"The other chap crawled ashore again and went away. The mate went uptown and was gone for a couple of hours. He came back boiling drunk and with six other drunks with him, all shouting and singing. They had their bags with them and I shipped the bunch although I didn't need six hands. I figured that some of them would change their minds before we sailed and would duck ashore again.

"There was no use in trying to put them to work, so I let them sing and shout to their drunken hearts' content. With the help of the knock-kneed boy and some dock wallopers we shifted the vessel at the coal chutes and got our load.

"The six roysterers stopped singing finally. Two staggered ashore vowing vengeance on all Canadian crews, mates, masters and ships. The rest of them got to arguing and started to fight, but decided against it after a minute or two, and all went ashore telling each other what they were going to do to the two who had gone first.

"I persuaded a couple of bums on the dock to sign on with us. One of them had made two or three trips in a tow barge and could steer a fair trick. The other was a fireman, but he turned out to be a pretty good man aloft after I showed him what was wanted.

"The mate was sleeping off his jag. So I hustled uptown myself to try to pick up another man or two. I got two to go aboard with me. One was Jumbo Lynch, a giant of a man who was noted all over the lakes for his enormous appetite.

"The drunk who had fallen in when he tried to climb aboard the vessel was partly revived and was gloriously sick. Gilbert Throckmorton Featherstonhaugh, the bargeman and the fireman were still on board. The cook took one look at Jumbo Lynch and stuck his hand in his pocket and rattled some money. Jumbo nodded. It was common custom for cooks to slip Jumbo a piece of change to get rid of him. No cook wanted the job of feeding that glutton.

"As soon as the chance was good the cook gave Jumbo the odd change and he ducked ashore and took his partner with him.

"The mate was coming out of it all right by that time I had four hands such as they were, and I'd sailed with short crews before. There didn't appear to be any chance of doing any better so we cleared with what we had. It was one gosh horrible trip up the lakes. We wouldn't have got away from Black Rock docks if we hadn't had a donkey engine, and it did most of the work on the way up.

"The crew left the vessel as soon as she docked at Fort William, but their leaving was small loss. There were swarms of sailors looking for sites up above. I shipped four cracking good men. Two of them I knew had often shipped as mates. The other two were old timers who had been sailing for years."

Sweat the muslin on 'er.

Sheet home her tops'ls, too.

the boys'll crowd 'er through." 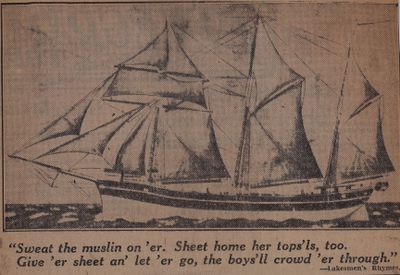