The Doctor's trick at the wheel is not yet out. The Old Man is still below and pounding his ear. Here is a yarn about a hooker that was found in the Mud at Bronte.

TENTATIVE dredging operations recently discovered segments of the senile hull of a stonehooker in the mud and silt of Twelve-Mile Creek. Local antiquarians investigated and deliberated and declared that the old hulk was the scow schooner "Brothers," which was built in the period of the early 60's and labored and throve under many masters and owners until 1898.

It was a flagrant case of mistaken identity.

In 1898 Robert Osbourne of Bronte sold the poor old Brothers to the Toronto Industrial Exhibition. The ancient craft was then in the last stages of decrepitude and presented a serious problem for the craftsmen who strove to keep her from falling apart while they prepared her for an impersonation of U. S. S. Maine.

They "rigged her and trigged her with paint and spar," and no doubt they "faked her well," as wicked Reuben Paine is reputed to have faked his sealing schooner "Stralsund," previous to his gory clash with Tom Hall of the Northern Light.

In strange and awesome disguise the Brothers was nursed to a position about half a mile off shore from Exhibition Park and blown to minute smithereens for the entertainment of Exhibition patrons, in 1898. Obviously the hulk discovered in Bronte Harbor in 1933 is not the hull of the Brothers.

The Long Old Man of Bronte came and looked briefly over the mud-imbedded hulk. "It's the Maw-dess," he announced. "I'd know her anywheres in the world by her forefoot. There was only two scow-built vessels on Lake Ontario that had forefoots built into 'em. The other'n' was the "Cornet" that sunk off Cotton's Point, thirty-five years ago. Lige Pickett was sailin' her and he had young Pan-face Harry Weatheral with him. They came closet to gettin' drowned, she went down so fast— just dropped right out from under their feet with all her canvas set and pullin'.

"This here is the Maw-dess. She was built up on the keel and stem of one of the old Gooderham yachts, the "Geraldine," that's how she come to have a forefoot. The Geraldine came before the first "Oriole," or anyways before the second one, and there's been four of them altogether, bein' built one after another as the last one wore out.

"Aaron Walker of Port Credit had the Maw-dess built and owned her for twenty years. When he died she was sold to Jimmie Jackson of Oakville, who had her for a year and sold her to Bill and Hughey Harrison. I dunno who had her last.

"The stone-hookin' trade drove onto a lee shore and just naturally curled up an' died, about the time the Great War broke out; not havin' been much good for ten years before that. Fellers that had hookers tied them up one place and another and hoped some sucker would come along and buy them. Most of 'em sunk at their moorings or fell to pieces or was cut up for stove wood.

"Yessir, this here is the Maw-dess, alright. There's no manner of doubt about it."

"Maw-dess?" a professor of languages queried. "How do you spell it?"

"Uh!—She was named after that race horse that trotted the fastest mile ever done in the world," the Long Old Man evaded.

All of which goes to show that fame is fleeting.

STOWED in a neglected corner of a dusty loft at Port Credit is a rule-of-thumb half model of a sailing scow, and snugged in beside the model is a faded old lithograph depicting a thoroughbred mare, driven to a high-wheeled wooden sulky. The pictured mare is the most famous trotter of all time. "Maud S.", 2.08 3/4. The suffix S. is the initial letter of the owner's name, "Stone."

The model is of the scow schooner Maud S.", built by John Miller and Abram Block, at Port Credit. Her keel was laid in the fall of 1884, and she was launched in the spring of 1885. She measured approximately 54 feet over all and 16 feet 8 inches beam, and the depth of her hold was not more than three and one-half feet. Her burden capacity was about forty tons, the equivalent of 3 3/4 toyces, or 810 cubic feet of lake shore stone.

The Maud S. was built for Aaron Walker, of Port Credit and formerly of Oakville and other lake ports. Walker was born in England and came to Canada when a boy of twelve years of age, and spent most of his life sailing in Great Lakes vessels.

In the course of his maritime years he was master of several coastwise craft and bought the schooner "Sunshine" from the Corsons, of Burlington, and later sailed the Geraldine, a schooner yacht, which, in her declining years, had been relegated to the commonplace trade of stone carrying.

Eventually, so old and rotten that she no longer could be kept afloat, the Geraldine was hauled out and broken up. Stout oak timber was scarfed to her keel to give it greater length, and it was slotted to accommodate a centreboard box. Her stem, forefoot and sternpost were sound and strong, and were used, with the lengthened and slotted keel, in the building of the Maud S.

The Maud S. was a smart and handy little vessel. She drew little water and carried most of her cargo on deck. She turned fair profits for Aaron Walker and his son, Russel, who sailed with him for the first five years of the hooker's faring. When Aaron Walker died in 1900, the schooner was sold to Jimmie Jackson, an Oakville fisherman, who partly rebuilt her and later sold her to the brothers, William and Hugh Harrison, of Port Credit.

Scow modelled craft were popular with the men who made a business of gathering and carrying lake stone, as they ever have been popular in coastwise, shoal water trading in all parts of the world. The cost of their building was considerably less than that of moulded hulls. Their shallow draughts permitted their safe operation in very shoal water and their low freeboard offered appreciable advantages of lading. The stonehooker models of Port Credit, Oakville and Bronte were perfected types, and were the smartest and least cumbersome that were ever developed.

The sailing scows of other than Lake Ontario origin were mostly of V-bow, high-sided type, a model that is said to have been borrowed from New Zealand, where at one time large fleets of scows were employed in coastwise and inter-island shipping.

"The Maw-dess never did nothing outstanding or spectacular, as far as I know," the Long Old Man of Bronte relates. "She sailed well, and Aaron Walker knew how to handle her, and he certainly wasn't afraid to crowd canvas on her; and she made money for him while he had her.

"I guess she could go to windward of any other scow on the lake, and lots of the moulded hulls, on account of her big centreboard and her forefoot. Oncet she crossed the lake all by herself and didn't do no damage, and I guess that was the only time in her life that she went all the way across.

"It was in the early spring of 1899. She was lying at Port Credit with her anchor chain unshackled and carried ashore and made fast around a telephone pole. The ice in Credit river went out extra early that year, and there was some freshet and a half a gale of wind from the nor'west. The Maw-dess was all right at night, and in the morning she was gone. Half of her anchor chain was still made fast to the telephone pole. It had parted, and the rest of her moorings had been carried away and she'd some way managed to squirm out through a fleet of other hookers and around mud banks and out of Credit harbor into the lake.

"Russel Walker caught a train and went to Port Dalhousie, figurin' that the nor'west wind'd drift the hooker over there. It did. She was about seven miles in the lake and comin' along fine when he first got sight of her. He got Billie Hands to go out after her with his fishin' tug, Nellie Bly, and they got her in all right. Not a thing had happened to her, and hadn't taken a drop of water. They left her at Port Dalhousie until navigation opened that spring, and then took her gear and canvas over and fitted her out and sailed her back to the Credit."

Yessir, the hulk in the mud of Twelve-Mile Creek is what is left of the Maud S. There is no manner of doubt about it. The Long Old Man of Bronte has identified her by her

SHE WAS SMART AND HANDY

Port Credit schooner scows were of distinctive type, noted for their speed and ease of handling. The firm of Miller & Block excelled in building this class of sailing craft. 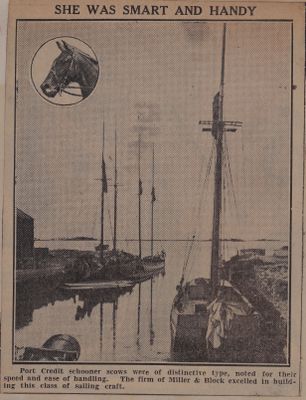