IT was a long pull and a strong pull. It started at Sturgeon Bay, Wisconsin, and continued for two weeks and ended at Toronto. It was accomplished by the Great Lakes tugs Clark and Minitaga. Their tow was the three units of a floating drydock, which became the property of the Toronto Drydock Company in 1917 and are now located, with an added fourth unit, at a point in Keating's Channel, where engineers created a right angle turn in the course of a running stream.

The trip from Sturgeon Bay to Toronto was much the longest but not the first that the floating dock had undertaken in the long course of its career of usefulness. Its first service was at Sheboygan, Wisconsin, and probably it was built there, at a long ago time when American lumbermen were revelling in the destruction of Wisconsin's supposedly inexhaustible pine forests, and the shipping of the Upper Great Lakes consisted largely of lumber carrying.

Sheboygan was a wild and lively port in those days; quite as romping and untamed as Saginaw, Alpena, Grand Haven or Muskegon. Lake schooner fleets rendezvoused there for cargoes and went into drydock there for overhaul and caulking. Timber cargoes were shipped in lake-built vessels direct from Sheboygan to the ports of Europe. The floating drydock was continuously busy to capacity.

Times changed. Wisconsin's pine disappeared and so did Sheboygan's shipping. Lumber carriers and timber droghers found no cargoes. The drydock's activities shrunk to a point near collapse.

The dock was moved to Sturgeon Bay, which is an inlet of the east shore of mighty Green Bay. A canal cut through the narrow peninsula of "the door" connects Sturgeon Bay with Lake Michigan.

There was plenty of business for the dock at Sturgeon Bay—for a time. The schooner fleets were rapidly dwindling, and doomed to shortly ease to exist, but their places and heir trade had been taken by wooden steamers, which were in their turn approaching obsolescence and meantime required repairs and, in some instances, rebuilding.

The dock was maintained more or less prosperously at Sturgeon Bay until 1917, when its components and equipment and all its gear and appointments were purchased by H. J. Dixon, and forthwith the Clark and the Minitaga exerted the long pull and the strong pull that ended with the arrival of the dock units at Toronto.

H. J. Dixon has spent a lifetime in shipments and maritime building. His father, Patrick Dixon, was a shipbuilder and marine contractor, and Dixons of the third generation follow the ways of their forebears. They are Lincoln County men, and the Dixon name is as closely and as prominently associated with the history of the Welland canal and the Great Lakes marine as are the names of Louis Shickluna, John and Melancthon Simpson, the Muirs, the Abbeys, or the McEvoys.

Since 1917, at their dock in Toronto, Dixon's have repaired and overhauled and reconditioned or salvaged scores of lake craft that make Toronto their home port or a regular port of call. They docked the Modjeska after her disastrous ramming of the Sunnyside breakwater. They have had the old Katie Eccles and the Lyman M. Davis on their dock, and ships of the Canada Steamship Lines, and John E. Russell's barges, and Harbor Board tugs and scows, and a miscellany of other things that float and leak and need repairs.

A year ago the Dixons built the harbor tug Ned Hanlan, the first steel vessel built at Toronto in many years.

Steel or wood or composite hulls, or anything else in the cosmos of dockyards—all is grist that comes to the Dixon mill.

THE DOCK THAT ROAMED

The floating dock of the Toronto Drydock Company has travelled more than one thousand miles on the chain of lakes. The picture when the steamer S. M. Stephenson was in the floating dock. The Stephenson was built [ed: as a schooner] at Manitowoc, Wisconsin,in 1880, and rebuilt at Sturgeon Bay in 1914. She is owned at present by William Burns, Detroit. She is 166 feet long, has 33 feet beam and 12 feet depth. Her gross tonnage is 546, net 426. 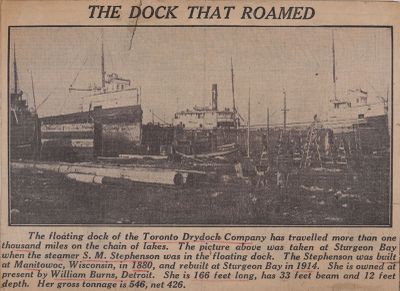