Lake sailor tells of what it feels like to have too much fresh water.

"Here on the lakes, " said the Second Engineer, after the watch had heard the English oiler's yarn about being hove down off the Horn; "we don't get seas as big as on salt water. They're just as bad because they're short and steep, but they're not so high nor so long. They rack a vessel more, but it's not often a vessel's pooped or clean swept, the way you tell about.

"Any of you fellows ever been in a vessel that was pooped? 'Tain't likely, because you're here. Most fellows ever in a hole like that don't come through. But I was once when I was mate of the Robert C. Porter and it's always been a wonder to me how we ever came out of it.

"We were bound down Lake Erie with a cargo of iron ore, loaded pretty deep. The Porter was a big schooner, a three'n-after with squares'l and double raffee forrad. She had high bulwarks, so high you could just see over them on your tip toes. Like most of those lake schooners, she was flush decked, with a fairly high cabin trunk aft.

"It freshened up in the morning from the westward, and, of course, the sea began to run—it don't take half an hour to raise it on Lake Erie, where the water's always shoal. By noon she was a-whistling like the air brakes of a lightning express and the Porter was waltzing around like a yawl boat in spite of the thousand tons of ore under her hatches. I tell you for a fact, when the watch was called at eight bells for dinner we had to eat off the cabin floor. There was no holding the stuff on the table nor keeping the stools in place in spite of the rolling chocks. We turned the table upside down on the floor and nailed it there and piled the grub on the bottom of the top, so the side pieces would keep it from spilling around, and then sat down around it like so many Indians and made a meal somehow, for it had been heavy work shortening down all morning, and we were fagged out.

"Well, by four bells in the afternoon watch the sea was as big as I ever did see—pea green colored, with frothy gray tops and shutting out half the dingy sky when we settled in the trough. We had got the mizzen in altogether and the mainsail reefed and the fores'l furled, keeping her driving under the squares'l forrad and a couple o' jibs.

The light sails was tied up, of course, and the stays'l was stowed because the squares'l blanketed it.

"You couldn't see much scenery alongside on account of her high bulwarks, but every now and again the foamy top of a roller would shoot up in the air as high as the peak of the reefed mainsail and then drop with a crash on board or a smother would burst up between the taffrail and the yawlboat—she had high iron davits—and swirl-in over the wheel-stand; but it was broken water, just spray in big doses, and didn't bother us much. I knew the seas were catching her, but they seemed to underrun her easily and she was making good weather of it.

"By'n'by when we should have been abreast of Long Point, the Old Man climbs up on the roof of the cabin with his glasses. Jack Breen was on the fo'sle head forrad on the lookout, and the rest of us, me and three of the lads, were snugged under the break of the house aft to get what shelter we could from wind and water.

"All at once she seemed to stop and began pointing her bows to the clouds, as though she was a duck starting to fly. There was a big burst of spray thrown into the air at the fore rigging on either side of her, and I knew an extra big sea had underrun her. There was a crash of breaking water aft, and a small sea came swirling along either side of the house like a mountain stream, and could tell a second big fellow had broken.

"'Look out for the next! " I told the boys. 'When you get Three Big Ones the last is always the worst— and you know that's so on the lakes. Just then I heard the Old Man sing out, 'Holy Sailor! Hang on, you chaps!'

"I ducked away from the house and looked aft. Ever been in the Maid of the Mist where she runs up right close to Niagara Falls? You know how there seems to be no sky and no air, nothing but mad water let loose from everywhere and rushing at you, gray and whirling. Well, that was just how it looked astern of the Porter. The whole mass of water just blotted everything out of sight—yawlboat, wheelsmen, cabin, captain, everything, and I felt myself whirling along like a fish in a power flume, grabbing, grabbing, grabbing, and hands grabbing, grabbing, grabbing at me. The whole four of us went whirling, writhing, clutching away together.

"Then something solid rushed at and we all caught it at once. What it was we didn't know and I didn't think about, but it was solid.

"We found ourselves forty feet outboard of the Porter, right on the end of the jibboom, mixed up with the jib-top'sl and its gear just as she was coming up and shaking herself clear.

And the vessel—what a sight she was! There was nothing of her showing above the cabin top. Her masts were like trees growing out of water. The Old Man had jumped to the jaw of the mizzen gaff and Jack Breen swarmed up the forestay on top of the stays'l halyard block, both wet to the knees. That'd mean her deck was ten feet under water amidships.

She gave one wallow and I thought she was gone sure, but it spilled some of the water out o' her, washing away half of the lee bulwarks on one side, and that let her free herself. By a God's mercy the boys at the wheel hung on, though the weight of water almost flattened them against the spokes, and she stayed straight before the wind. If she had a'broached to, full to the rail as she was, she'd 'a gone down sure. As it is, I don't know what made her stay up—but she did.

"We crawled back along the horn and inboard again. It was my job as mate to look after things, and the first thing I saw was that her donkey engine was clean busted, and the next thing I saw was that there was three feet of water in the forward pump well. We worked our way aft through water in her waist and a floating litter of wreckage of what had been our provision tank, hawser box, coil stands and deck fittings.

"'Come aboard, sir!' bawls cut old Bob Tipp, saluting after the fashion they taught him in the navy when he caught sight of us.

"The Old Man—he was just a youngster of twenty-one, but you know how the skipper is always called—sort of coughed and muttered ‘Thank God,' and then sings out bright and cheery:

"‘Dam glad to see you—only next time you quit this vessel so sudden without leave your shore going'll be stepped for good.'

"D'ye know, that bit of fun was as good as a rescue tug? The Old Man gave us orders thick and fast after that, and we carried them cut like a prize crew instead of a lot of drowned rats. With our engine busted there was no getting the big sails on her, but we set the raffees and sky jibtopsail by man power and the capstan and so kept her driving before it, fast enough that the seas didn't catch her too sudden, although it was at the risk of tearing the spars out by the roots. Of course if we'd got the Three Big Ones again she'd 'a' been done for—but we didn't, and loggy as she was with all that water in her, she drove fast enough under that press of canvas to clear the ordinary run of seas.

"We kept her up a bit, just enough to clear the east tail of Long Point, with the hand pumps going and freeing her slowly, or at least keeping the water from gaining, and once we hauled into shelter of the bay we let go both anchors and next morning a tub from Port Colborne—"

"Heigh below, you sleepers! Don't, you hear the news? It's EIGHT BELLS! Show a leg'," came the time-worn hail down the forecastle of the freighter, and the second engineer, somewhat abashed at being caught yarning forward through his watch in, instead of spending it in solemn dignity and tobacco smoke in his berth aft, relapsed into silence while the crowd turned out. 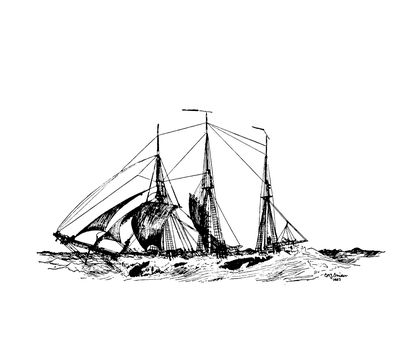