ALBANY, N.Y., capital of New York state since 1797, was Fort Nassau of the Dutch in America in 1614, and received its English name and English flag in 1664. It is a fine city now, at the head of the Hudson, and has had for a hundred years fast steamboat connection with New York.

Mrs. Anne McDonell’s diary of 1805 brings her - and us - to Albany on June 18, in the Walton family carriage, after a 14-mile drive on the Schenectady turnpike. In Albany, she had indeed reached civilization again, after the wilderness of Upper Canada and the crudities of Oswego and the Wood Creek passage to the Hudson River. This was the last stage of her journey to New York, with a well-organized transportation service operating daily.

Before Anne Smith MacDonell’s day, and for a long time after, Albany had a noteworthy line of sailing packets, wide, shoal sloops with lofty rigs to take them through the narrows of the Highlands, and yacht-like accommodations for passengers.

Capt. Joseph E. Johnston, in charge of the Museum of Great Lakes History in the schooner J.T. Wing at Belleville, says when the Erie Canal was opened there was such a demand for bottoms for west-bound cargo that everything that would float was pressed into service, including Hudson River sloops.

Some even started from New York, laden with migrant settlers and settlers’ effects. They could sail to Albany, dismantle there and tow west through the Erie Canal by mule power to Buffalo, passing under the fixed bridges, because their spars were out. Then they could refit and sail, or be towed by steamer up Lake Erie to Detroit. Here the settlers would strike out for western lands in prairie schooners. The sloops that brought them might re-rig as schooners of another kind for traffic in the straits of Detroit for which their shoal draft made them suitable. They were not so happy in the big seas or choppy water of Lake Huron or Lake Erie, but were at home on shallow Lake St. Clair. Capt. Johnston has a fine model of one of these sloops in the museum.

Schooner Days never beheld any of these on the lakes, but did have the good fortune to see some Albany packet sloops on the Hudson, perhaps the last. They had long surrendered passenger carrying to the fast side wheel steamers, but they were in the market trade with fresh vegetables and country produce.

They were well-shaped beamy vessels with clipper bows, plenty of sheer, very high broad sterns, probably inherited from the Dutch. They were neat in their paint, mainly white, with bottoms red or green and contrasting stripes at rail and covering board. Their transoms were rounded and the sterns decorated with eagles or stars and stripes.

The rig was uniform, a very tall mainsail with a gafftopsail above it and a 60-foot mainboom sticking out far over the taffrail. Those we saw had only one big jib, on a standing stay from the lower-mast-head to the end of the long bowsprit, which protruded even farther forward than the main boom did aft. They were sailed very wide and rap-full for windward work, and their centerboards kept them from making much leeway in their many tacks.

Aboard one of these sloops the fair Anne prepared to complete the long journey to New York.

She probably also did a little more buying first. One does not start out for the Coronation without shopping and a little more on the way before reaching London. So with Anne. She would not wish appear among the first-class passengers of the packet line like a Mohawk from the wilds of Canada. There might be - and there were - important people on board the liner. She certainly was sunburned after three weeks on the water in June, and she probably felt her permanent needed some attention.

Next week her diary will describe passage down the Hudson 148 years ago.

The Hudson passenger packets between New York and Albany a hundred and fifty years ago looked much like this Lake Ontario yacht of 1881, though simpler in rig. Indeed this ATALANTA of Belleville, last Canadian challenger for the America's Cup, was said to be designed upon the lines of a fast-sailing Hudson river sloop. She was built by Alex. Cuthbert at Trenton, as a development of his own peculiar flatiron model. Though very fast, she was poorly finished and equipped, and did not win the Cup. 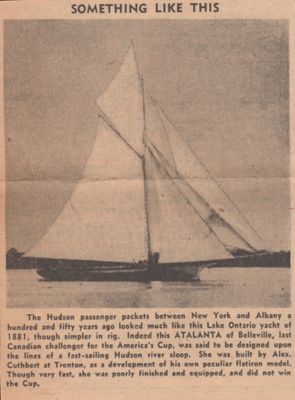