CAPT. NELSON PALMATEER, one of Prince Edward County's grand old men of the sea, was in Toronto recently, full of plans for next year's annual sailor's service in Cherry Valley, though he'll be eighty within a few weeks of that festival.

We got talking of scows. You may a remember "Schooner Days" number not far back was devoted to to "Scow Len" Anderson and his unsatisfactory partner. And many of the stonehookers whose names were given recently were of the scow models.

"Yes," agreed Capt. Palmateer, scows used to be plentiful in sailing days and it wasn't altogether because they were easy to build. Many harbors were shoal then, nothing but creek mouths or little ponds, and scows could get into them where a sharp-vessel would get stuck. A scow could be dragged over the bottom or beached with less damage and got off with less trouble.

"My father's farm was, as you know, at Point Traverse in Prince Edward. One Sunday morning in December in the late sixties I was setting out to see the young cattle after the night's snowstorm . I saw two men ploughing up our lane.

'Boy,' hailed the first one when he saw me. 'Can ye tell us where we are? We're strangers here and don't rightly know.'

"'Nossir,' said he. "I know Long Point, for that's where we come from, on Lake Erie.

"'So I've heard, I answered,' for Abigail Becker had rescued the Conductor's crew there the year I was born. "But this is Long Point on Lake Ontario. Some call it Point Traverse, to tell it apart from Long Point further up the shore here, but that Long Point again is called Point Peter. This Long Point at the mouth of South Bay.'

"'So that's where we are,' says he. "Well, look ye. I'm Capt. Wilson, of Port Dover on Lake Erie, and my vessel's ashore up the beach and my mother's aboard and I want to get help. Is there any men around?'

"I called father and we went with the strangers back through the snow, and there, with her jib boom poking into the bare poplars and tall hickories that grew on the back, sat a schooner that might carry 5,000 bushels. We always sized them up by their barley capacity in those days. This one was 72 feet long; narrow, only 16 feet beam, and shallow; 6 foot 7 in. in the hold, and not drawing three feet with her board up. She was a scow, and so shoal that her forefoot was right on the beach. A hawser had been carried out and made fast around one of the hickory trees, but it wasn't needed to hold her. She was almost high and dry. Outside, on the Poplar Point Bar, the seas were still pounding sullenly as they will after a gale.

"'How did ye come to make fast here?' asked father.

"'Why,' said Capt. Wilson, 'we loaded a cargo of wheat in Long Point Bay, on Lake Erie, and came down through the canal with it and got to Kingston and unloaded at the elevator. Then we started home, flying light, and got caught in the snowstorm when we got so far up the lake. Turned her around to run back, and couldn't see the land. First thing we knew we were bumping on that bar out there. She's a strong vessel, if she is a scow, built in Sandusky, and almost new. She bumped until three big seas one after another lifted her over the bar, and then she blew right up on the beach here. When the snow cleared we dropped right off the jib boom end into the snowbank and made our lines fast on the trees.

"We call climbed aboard. The vessel's name was the Saucy Jack, of Port Dover, though she had been built in Sandusky, Ohio, as her master said. Sure enough, in the cabin, warm and dry and cozy, was the captain's mother, a nice old lady. She cooked for her son and the two or three men of the crew. She was as cheery over the wreck as though it were a fair. 'We had to spend the winter somewhere,' said she.

"The upshot of it was that she and her some came to stay with us, and the vessel was stripped and her gear stored on board. Capt. John Walters, who was something of a big shot in farming and the schooner trade - he had a scow named the Sea Bird, larger than this Saucy Jack, and three hundred acres on Point Traverse, and rented the Main Duck to pasture his cattle - he purchased the Saucy Jack from Capt. Wilson for $700, and the captain and his mother went home.

Capt. Walters - no relation as far as I know, to Angus of the Bluenose - bought some of the tall hickories on the stump and cut them down to make skids, and set up two capstans and hauled the Saucy Jack up high and dry. It was easy doing that with her scow bottom. Then he gave her a good overhaul and repair during the winter, and launched her next spring and kedged her out over the bar on a smooth day when the water was high. His son-in-law, Wm. Ostrander, sailed her for him. It was the first time he was a captain. After that, I believe, Dave Andrews of Napanee, bought her and Capt. James Oliver, of Kingston, had her. The nickname 'Sassy Jack' Oliver stuck to him for years.

"I was pretty well brought up in scows myself. My father owned a scow schooner, the Flying Scud, of 5,000 bushels, and I sailed her, before the mast, my older brother being captain. Later I was mate in her, but that was after she had been bought in Toronto and rebuilt with a schooner bow and straight stem, renamed the Flora. She was wrecked at Oakville in 1894, when Capt. Alfred Thomas had her.

"Scows were handy for the Bay trade and the islands round Prince Edward. They would go into all the little places where there was nothing but a wharf, or maybe not even that. They would pick up a farmer's grain from the lake or bay shore on smooth days. James Cooper, who kept a general store in South Bay village, had a little scow of 3,000 bushels named the Jessie Brown. She plied in the Bay trade, but Cooper used her principally to bring in his goods from Kingston. She would pick up jags of grain from the farmers and come back from Oswego with the odd cargo of coal, or from Kingston laden with carpets and calicoes, lanterns and lamp black, soap and sundries, salt and sugar, tea and coffee and crockery and the Lord knows what not for Mr. Cooper's general store. Sometimes she carried livestock. I must tell you about two trips she made in that trade."

Capt. Palmateer will do so in The Telegram next week.

"BARQUE SWALLOW OF PORT CREDIT," square-ended scow which saw seventy years' service on the lake. She began life as a sand-carrier to fill in the foundations of the old Jail which used to stand at the foot of Berkeley street, Toronto.

"THE PUNCHY," a barrel-bowed Bay of Quinte scow, registered as the John Wesley of Picton. She was later in the stone trade out of Frenchman's Bay, when owned by Capt. Daniel Marks. 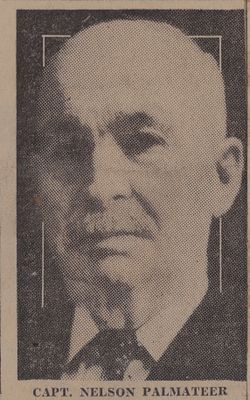