Here follows the fate of "Fisty" Masterson, and his schooner of rebellion times in Toronto as promised last week. The story is as told by the late Capt. William McClain, who was going to Upper Canada College when the principal incident happened, and who afterwards sailed in the Ploughboy, Jane Harper and Clarissa, lake schooners of the times.

That was in his younger days. He was a survivor of the old town of York rather than a civilian of the new city of Toronto; though he became a picturesque citizen of the latter, after incorporation, and his wife lived well on into the present century.

"Fisty" was a fine strapping sailor-man when he came here in 1825. Some said he had been in the navy, and he certainly had all the old time man-o'-warsman's equipment-- eventually adding a wooden arm with an iron hook. This was to replace a port flipper blown off in a celebration of Queen Victoria's accession, more loudly loyal than judicious. Poor "Fisty" lost his limb through the premature explosion of a cannon in the royal salute.

He made a quick recovery, however, and went on sailing the little forty-foot schooner Christina, called after his wife. Mrs. Masterson was a pious God-fearing Presbyterian Scotswoman and she kept her bay shore cottage as neat as a new pin. The place was at the foot of Bay street then about a hundred yards south of Front street, where the viaduct now crosses. The cottage stood on the very edge of the harbor, and Mrs. Masterson looked after three or four skiffs which "Fisty" built during the winters and kept for hire in the summer. Upper Canada College boys were extensive patrons of Mrs. Mastersons' boathouse and buns, and she was a prime favorite with them. The late John Ross Robertson, one of her early patrons, attended her funeral sixty years later with all the respect he could have shown Queen Victoria's obsequies.

"Fisty" and the Christina were far from being as regular in their behavior as was "Fisty's" wife and the Christina's namesake. The schooner was a little thing of thirty tons at the most, with two masts, no topsails, one jib, and a "barndoor' rudder. She was a standing-keeler, but as shoal as possible for her specialty was slipping into creek-mouths or lying close on the shore, where farmers could drive their teams into the water and buy contraband from Niagara or Youngstown, N. Y. whither the Christina traded.

"Fisty" was a bold lad, and sometimes he would sail right into Yonge street slip and ask the Customs officers to come aboard and sample something good he had picked up on the other side. While they were deciding that the sample while good, was too small to be dutiable, they would not notice that the scow or yawlboat the Christina towed would have mysteriously disappeared. "Fisty's crew of one man and a boy would have quietly sculled it up under the planking of Yonge Street wharf. They would wait there until they heard the reverberating footfalls of the law clumping back to the Customs House. Then they would scull across to Cooper's wharf at the foot of Church street and deliver the chests of smuggled tea, with which the yawlboat was loaded gunwale deep, to one of Kings street's most respected merchants.

But one early morning, soon after "Fisty" had lost his arm and got the hook and nickname, Custom Collector Carfrae was inconsiderate enough to come aboard the Christina without invitation, and before the yawl could even be hauled alongside he spotted a couple of wine puncheons under a tarpaulin, and commenced to mark a broad arrow upon the Christina's narrow deck. That meant, of course, that she was seized by Her Majesty's Customs.

The outraged "Fisty," taking time and Her Majesty's Customs by the forelock, leaped overboard with the latter. He clung to Mr. Carfrae with his one arm like unemployment and the winter of 1934 and the wonder was that the former pair were not drowned in the bay, even as we would all like to do to the latter.

They were hauled out, however, and a voyage began with the old jail on Toronto street as the objective, and the courthouse at the corner of Church and King as a port of call. Tow constable, who had assisted at the rescue, formed the convoy. On the way, passing through a lane, "Fisty" gave them and the Customs men the slip and disappeared in the direction of the waterfront. He was next heard from in that land of the free and the home of the brave now associated with the initials NRA.

Before Mr. Moseley, could get a bid the crowd demanded that the wine be tested. The auctioneer, nothing loth, produced his gimlet and goblet and proceeded to draw off a more or less sparkling glass of bay water.

Not being able to account for the reverse of the miracle of Cana of Galilee, the auction abruptly switched to the sale of "64 shares of the ship or schooner known as the Christina, her boats, guns, apparel and other furniture." But everybody liked "Fisty," with the possible exception of that damp or dampened Customs collector, Mr. Carfrae, and the Christina was bought in for a few shillings, much on the principle of hard-time eviction auctions. The purchasers turned her over to Mrs. Masterson.

The redoubtable "Fisty" then wrote Sir Francis Bond Head from Buffalo, that he was a poor but loyal mariner burning with zeal to continue the service of the Queen's Most Excellent Majesty, from whom he had already sacrificed an arm. At this date it is impossible to day whether he offered to take his trusty cutlass and cut off his other arm, to show his loyalty, while her Majesty was menaced by Mackenzie and his horde of rebels, but he wanted to know if please couldn't he come home?

Sir Francis with much more to worry about, let him come; and the Christina's next trip out of York-beg pardon, Toronto now for three years-was to Niagara with a load of Government stores for the use of the troops called to the peninsula to meet the threat of the Patriots squatting on Navy Island. And"Fisty" was at the helm.

On the way over to Niagara the Christina got some bullet holes through her bulwarks. Tradition does not say whether they came from without or within. "Fisty" again took his pen in his remaining hand and indicted another epistle to his friend Sir Francis, in which he pointed out that this poor but loyal mariner, returning from a sojourn in a foreign land to serve the Queen and prop a shaking throne, had succeeded in rushing essential military supplies into a threatened area, but at the imminent peril of his life and at the cost of the partial destruction of his only property and means of livelihood. The Christina so the harassed governor gathered, was a shot-torn wreck, kept afloat only by "Fisty's" zeal for her Majesty's service- and what was the Government going to do about it?

"The Government," then as now the magician to pull the rabbit of prosperity out of the hat of depression, did the trick for "Fisty" all right.

The little ex-smuggler was docked at the Government yard at Niagara and given two new strakes of planking all round, new sails, and a new outfit of lines and rigging.

"Fisty" tugged his forelock with his hook and smuggled no more. Perhaps it paid no longer, after they reduced the duty on tea from one shilling and three pence a pound, the tax in 1837. "Fisty" at any rate retired from the raging deep.

Mrs. Masterson continued to rent the boats to Upper Canada College boys, and "Fisty" established himself as a razor-grinder, which was an evidence of his invincible optimism in that era of blooming lilacs and side-whiskers. He varied his whetting and honing by acting as a runner, during the summer months, for the steamer which ran between Toronto, Hamilton and Rochester. His "spiel" which captured patrons from rival lines was long a delight of the old corner of Yonge and Front sts., in the shadow of the Iron Bock and the old Custom House which had once made things so hot for the worthy tar.

"Fisty" Masterson's schooner Christina and his cottage on the beach at the foot of Bay St. 90 Years ago.--From Robertson's Landmarks of Toronto, Vol. II. 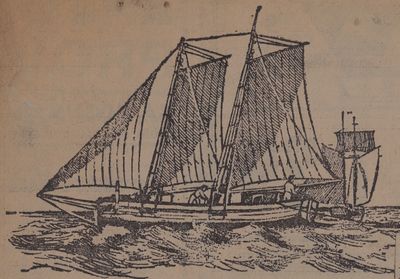 The cottage
Groups of Related Records