Five black gunned British ships visited Sodus Point, on the south shore of Lake Ontario, on the 19th of June, 1813, shot up the town and burned the pieces, and carried off six hundred barrels of pork and flour. British ships have been visiting the place at intervals ever since. Last month in the Bernice we met White Wings, soon to be winner of the Freeman Cup, working down for the starting point of that long distance race from Sodus to Hamilton; she was the forerunner of a fleet of a dozen slim-hulled yachts, in white or blue or green or black or mahogany, flying the dark blue ensigns of the Royal Canadian or Royal Hamilton yacht clubs, sailing a hundred miles or so to start a race of a hundred and thirty more. Quite appropriately one of them was named Invader—-Bobby Grant's Invader II., R. C. Y. C.

And what a reception they got at Sodus, a hundred and twenty-six years after the flour grab, of which few were proud, even at the time! The town and the yacht club and the harbor were theirs, on silver platters. Sodus heaped coals of fire on our heads. Wisecrack, if you wish, about international sport. On this lake it is a great deal better than international war.

On the ridge road along which the village is built were two boulders, placed by the Daughters of 1812, memorials of an all-but-forgotten battle, a battle so small that its butcher bill would hardly make the front page to-day as a traffic "accident."" One marker told how the Battle of Sodus Point was fought on the ridge between the British and Americans on the 19th of June, 1813; another marked the grassy site of a house where one of the American patriots bled away his life for his country. It took the place of a wooden slab covering an old well, which formerly identified the spot.

You have already heard how one Sodus lady brought out a stepladder and baskets, so that the "invaders" could help themselves to her cherries. A second American lady watching the whitecapped yachtsmen deciphering the inscriptions while they pitted black-hearts, paused on the flagged sidewalk and said pleasantly: "Would you object to a question?"

"Not at all, " said they, "for we might like to ask some ourselves, after apologizing for the unhappy intrusion 126 years ago."

"Well, " said she, "Has it ever occurred to you that it is strange that the victims and victors in wars should receive monuments and memorials, and there should be none for the country doctors who spend their lives in little places like this, bringing people into the world and seeing them safely through it?"

It appeared that one such worthy, Dr. F. L. Willson, had spent an honorable lifetime thus in this very vicinity, but there was no marker for him.

The lady passed on (happily in a better sense than the pretty-pretty radio commentators), and spread the news that three Britishers were in town, with such benevolence that in a short time the trio were borne about from point to point in motor cars and regaled with all the fruit and all the information Sodus could supply about the former British invasion.

Fine cherry trees, grand maples, and elms, some of them centuries old, an occasional walnut and ash, and mulberry trees with leaves like poplars and mild sweet fruit rather like white raspberries, made the village street on the ridge above the summer settlement a greater delight than some of the ancient village streets in New England. There was a mellowness about it which Connecticut and Massachusetts have not achieved for all their age. Buildings were all of wood; even the churches, clustered around the little green tree-embowered village square, sometimes called Troup Park after Col. Robert Troup.

None was of great antiquity, for the boulder marker placed by the pious care of the Daughters of 1812 showed the empty site of the old Mansion House tavern, the only building left standing, it was said, when the British burned the place in 1813. This was not quite accurate, for at the foot of a street running to the bay was a charming wooden house of several gables, described as "Fanny Buys' cottage" (Buys being pronounced Byce) and said to have been built around the frame of one of the buildings which was not burned. Perhaps this was one of the original storehouses or even Captain Nathaniel Merrill's tavern; for the Mansion House, it has been said, was not a tavern in 1813, being then only newly built for a residence.

Three of the maples around the town square may have bullets or grapeshot deeply bedded in their trunks below their dark rough bark, for they are known to have been there in the War of 1812. It had been said that a stone house in Sodus Point bore the marks of British cannonballs on its walls, but no stone house could be found. These scars of conflict are said to be discernible at Pulteneyville, five miles farther along the shore, a little vanished American port getting its name from Sir William Pulteney, an English baronet with a taste for speculating in American land to the tune of a million acres of real estate in the Genesee district.

Sometime, perhaps, we shall be able to explore Pulteneyville and Port Ontario, and other spots on the southeasterly shore of this marvellous lake of ours. Before then, however, we shall tell you more of Sodus, the British attack, and the ships that were launched there.

FIRST LIGHTHOUSE AT SODUS—A round stone tower built in 1825, so arranged that the keeper had to wind the clock at midnight, ensuring its burning all night.

SECOND LIGHTHOUSE AT SODUS—Square tower built 1871. Later removed to pier end. The piers were built in 1830 and 1835 by Col. Elias Riggs Cook, pioneer of the Sodus Point and Southern Railroad, commenced in 1853, when the first railroad ran into Toronto. It was twenty years later that the Sodus railroad operated. 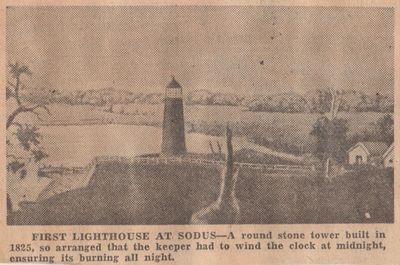