THEY'VE found the pump of the Ida Walker, wrecked at Weller's Bay on the 19th of November, 1886: and this iron relic, cast in 1860, has by now probably joined the collection of oddments, headed by the centreboard winch, which Scott Hutcheson has gathered from that wreck in a lifetime spent at his Prince Edward County camp, Barcovan Beach.

Perhaps it will be remembered that last year Mr. Hutcheson recovered some plank and the pump-well from the wreck. He commenced his collection fifty-three years ago, when as a boy he picked up a rolling pin bobbing in the surf. It was from the Queen of the Lakes, which was fighting for her life in the breakers at the same time as the Ida Walker. The Ida Walker perished, but the Queen survived; and Mrs. Scott Hutcheson makes excellent pie with the cook's rolling pin yet.

The Ida Walker was originally the New Dominion of Picton, one of several New Dominions launched in 1867. Her pump was cast seven years before, and the foundry moulded the date into it. It was probably used by an earlier vessel than the Ida Walker, or renamed New Dominion.

Weller's Bay is a natural harbor near the northeast angle of Lake Ontario formed by Prince Edward County and the Northumberland shore, and it was frequented from the early part of last century, when fishnets landed so many fish at Weller's Beach that they were salted and shipped in barrels from the shore. Weller's Bay was then a small lake, big enough for an island or two, and cut off by a mile of sandy beach from Ontario.

In the 1850's, it is on record, Ontario broke through, as that great lake had probably done before. The first beach [breach] was in 1851, a shallow gap which wagons could cross without difficulty. On Oct. 25th, 1853, old Ontario made another attack, and ploughed a six-foot channel through. I. M. Wellington, pioneer child born at Presqu'isle, was the last farmer to cross it, swimming his horses through the swells of the lake. By 1855 the channel was ten feet deep and the steamer Chief Justice Robinson of Toronto, and a big one for her time, took the Sons of Temperance in across the bar and down to Consecon, on their way from Brighton, to a big Fourth of July celebration in Oswego.

The new channel gave access to a well-sheltered navigable haven of importance to Prince Edward County in the growing barley trade. Schooners came in, and sailed down to Consecon to load, or they transferred cargo to the Carrying Place wooden railway that went to the Bay of Quinte.

It is said that cargoes of iron ore and feldspar or gypsum were shipped out of Weller's Bay for the American ports of Oswego and Rochester, where there was a blast furnace. Weller's Bay — named after United Empire Loyalist settlers whose descendants established the Kingston road stage coach line between Toronto and Montreal — might have been as great a port as Toronto or Hamilton, but the destinies of this part of Ontario were shaped differently. Development by the Dominion Government, which retains control of harbors and canals, was small, and the Province of Ontario did nothing for it.

Its usefulness as a port was greatly lessened by the narrow, shifting, winding, unprotected channel, continually being attacked by the pounding of lake seas, and continually being scoured out in fresh grooves by currents which play in and out of the bay like fish.

The place is now somewhat in the limelight because it is used among other things for target practice for bombers from the Trenton airport. It never had a lighthouse, but there are now two tall and flimsy towers on the beach, for the use of the spotters who watch where the dummy bombs fall when the boys fly over and try to hit floating targets. A good lighthouse and a buoyed and dredged channel would have saved many lives years ago, for the place has been the scene of dozens of wrecks in schooner days.

After a hundred years, Weller's Bay is still in its natural state. It provides a charming setting for many summer cottages, and pleasant beach colonies have been formed. Fishing has dwindled from an industry to a sport, although good hauls of herring, lake trout and whitefish are still made along the shore, and the Phillips boys and other hardy fishermen patronize it. There is good bass fishing among the wrecks whose bones protrude from the sands. In the fall Weller's Bay resounds to the crash of artillery, for it is a great port of call for ducks in their southerly migration.

These wrecks seem to have occurred in hundreds.

"Ashore at Weller's Bay" was a common notation after many vessel's names up to 1900. Many of the victims got off, for while the sandy lake bottom afforded no holding ground, it was soft and if the schooner did not break up in the gale which drove her ashore there was hopes for her. The barquentine Sarah Ann Marsh got ashore here, and a Brighton man was drowned, getting out anchors to heave her off, but she survived, to end her days on Huyck's Point, some miles farther south. The Eliza Fisher was ashore here more than once and survived it, and the little Snow Bird, a chronic Bay trader, got ashore here so regularly in the fall gales that old Capt. Andy Beard, sr., was reconciled to the beach as a good place for laying up for the winter. The Snow Bird was flat and shoal of hull, and could be jacked up and rolled above the smiting of the breakers until next spring. The Queen of the Lakes was another vessel that survived stranding at this point. So did the late Ald. W. T. Stewart's schooner yacht Oak Leaf, but he had a frightful time getting her off.

But many of the wrecks were fatal. The Ida Walker ended her life there, although her crew were saved by heroic exertions by the lifeboat men from Wicked Point and the vicinity. The Belle Sheridan was wrecked and every man on board perished except the late James McSherry of Toronto, who later became a ferry captain here. He lost his father and three brothers in the disaster. Coal from the Belle Sheridan is still picked up among the beach gravel.

Another wreck was that of the Garibaldi of Toronto.

There were several Garibaldis on the lakes in the days when the great Italian patriot of the middle of the nineteenth century was so popular in Canada that little boys were christened after him, and wore seersucker blouses which were also known as garibaldis or "garries. " Port Hope long boasted a schooner Garibaldi which had been built at Port Huron and was a clinker to sail; but the Toronto Garibaldi, owned by J. and J. T. Mathews, was also a smart vessel. She was a low-sparred. two-masted schooner of 350 tons carrying capacity, painted white with green rail and coveringboard, and a lead-colored bottom. She had a bowsprit staysail, which distinguished her from the Port Hope vessel, and she also had at one time a squaresail and single raffee, and a black M sewn in her fore gafftopsail, to indicate she belonged to the Mathews brothers; in all of which, as in her paint, she differed from the Port Hoper.

We shall tell of the wreck of the Toronto Garibaldi later.

SCOTT HUTCHESON, of Barcovan Beach, Weller's Bay, with some of the relics he has recovered from wrecks outside.

The Garibaldi and Belle Sheridan had similar experiences, anchoring at Presqu'Isle and drifting across to Weller's Beach, but the Belle Sheridan's was the more tragic. The Garibaldi struck nearer to the entrance. The Ida Walker's wreck is close to the same spot. 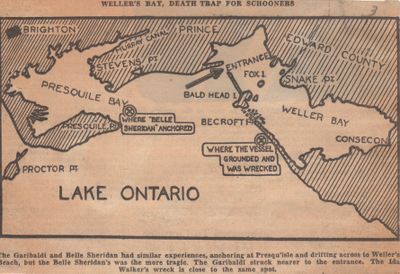