ADJOINING Doviel’s or Doville’s yard on the shores of Great Sodus Bay at Sodus Point, N. Y., on the south shore of Lake Ontario was the yard of Rogers and Betts — David Rogers and Lewis Betts. From this a number of schooners were launched, some of them of considerable size for their time. Taking them alphabetically, there were:

The AUSTRALIA, launched in 1853 and bought in 1864 by J. G. Beard and Co., Toronto. Joshua Beard was mayor of this city, and owned many vessels, which he employed in the milling industry. There is a picture of the schooner J. G. Beard in the City Hall. The Australia was sailed by the late Capt. Frank Jackman when he was 21 — his first command. One of his early voyages with her was delivering a cargo of locomotives for the early railways. Perhaps the Australia was the schooner which made the historic landing of a locomotive for the old Great Western at Port Britain, sixty miles down the shore from Toronto.

They used good names in the old days, often much more interesting than the dreary telephone book entries now heaped upon helpless vessels. And do you know why? Not just to gratify the vanity of some manager or director or head of a line, although that has its place. But marine departments make such a difficulty about registering a name with a meaning (because that name may be in use somewhere else around the world) that the blushing owner is forced to fall back upon his own name, unless he is protected by membership in the great company of William Smiths and John Joneses. What harm would be done if a dozen Chargers were on the list, if they were registered as the Charger of Toronto, the Charger of Sodus, the Charger of Chicago, and so on? But it’s an unpicturesque world. For example, Will G. Reilly had difficulty getting a “warrant” for his pretty little mahogany launch San Toy, of Toronto, because some battleship out at Singapore or somewhere using the name might be confused with it! Knowing Wiliam as we do, all we can say is woe to Nippon if either San Toy ever gets after them.

But about the Charger of Sodus, we know no more than the name.

Many of us remember the steamer Corsican plying to Toronto forty years ago in the Richelieu and Ontario Co.'s fleet, but another Corsican was a schooner of 281 tons built by Rogers, not at Sodus but at Olcott. Like other lake builders, Rogers probably travelled from place to place, wherever a contract was to be had, it being cheaper in their time to build on the ground where the timber was growing than to haul the timber to the yard, possibly hundreds of miles away. The schooner Corsican was built for the great Oswego firm of Smith and Post, in 1862.

At Olcott, sixty or seventy miles west along the shore from Sodus, in 1853 Rogers built this schooner for George Shaw, of Oswego. She measured 183 tons.

The FREE TRADER, a small schooner built by Rogers in 1849. She measured 46 tons, and was owned by Yolt of Montreal in 1864. From her size and her name she may have been intended as a smuggler, for smuggling was an organized business on the lakes in the early days. If so, and seeing that it was ninety years ago, let’s hope she made a fortune for her owners, whoever they were.

The R. B. LUMMIS, named after a prominent pioneer of Sodus. She was a large schooner for her time — 1855 — measuring 227 tons, and Rogers built her for Morley Bates and Co. of Sodus. Possibly this was in partnership with his neighbor Henry Doville, whose yard adjoined. The Lummis is also listed among Doville’s products.

This was, as far as it known, Rogers’ largest launch. She was a fine two-masted schooner of 297 tons register, with a clipper bow, high sheer, monkey-rail running all the way around her, and a bowsprit staysail, that is, fore staysail and standing jib all in one, set on a stay extending to the bowsprit end. The details are from an old print showing her in Manitowoc. On Sunday, June 22nd, 1871, she arrived in Manitowoc from Buffalo with a locomotive on her deck. This bulgine was christened the Ben Jones, after Manitowoc’s founder, and the occasion of its arrival was high holiday in the Wisconsin town. The Mediterranean foundered off the Wisconsin shore, near Sheboygan, in 1891.

This schooner of 108 tons was launched by Rogers in 1860 for E. Blanchard and Co., of Sodus, but she is better known under her Canadian registry, where she appears as the Mail of Montreal. She was bought by Capt. George Sherwood, of Brighton, and traded out of Presqu’isle until she sank in that harbor about 1878. She was an older vessel than her building date would indicate, for she was a rebuild on the bottom of the Isabel, one of many schooners bearing that name.

Although H. N. Throop, of Pulteneyville, is given as her owner in Thomas’ Register of 1864, and Alexandria Bay, down the St. Lawrence, as place of building, in 1857, the Rival is said to have been another of Rogers’ products. She was a large schooner, measuring 331 tons, and probably three-masted.

Fifty years ago this smart-looking little two-master, with clipper bow, raking transom, white top, green rails and coveringboard and lead-colored bottom, swam into the recorder’s ken at the old Queen’s Wharf. Mother had seen her earlier, unloading cedar posts over at Charlotte, and had faithfully reported her to her schooner-loving firstborn. The Fred L. Wells then hailed from Oswego. It was at Oswego she was lost, in 1900. She was an old vessel, for Thomas’ Register gives her builder as Louis Shickluna, at St. Catharines, and states that she was built in 1849, using the bottom and outfit of the schooner Raney, and was rebuilt in 1854. Cash and Dingman, of Buffalo, were her owners in 1864. She registered 158 tons.

This deponent knoweth not what local patriot, perhaps a conqueror in the Mexican War, was commemorated by this schooner’s name, but she was launched by Rogers for Morley Bates and Co. and was a big one, measuring 242 tons.

Schooner J. G. BEARD of TORONTO, one of the fleet owned by the Mayor of this city many years ago. She is thus depicted in one of the pictures of the city painted by Owen Staples from a water color by Fred. H. Grainger, and presented by the late John Ross Robertson for the decoration of the corridors of the City Hall, in 1914. 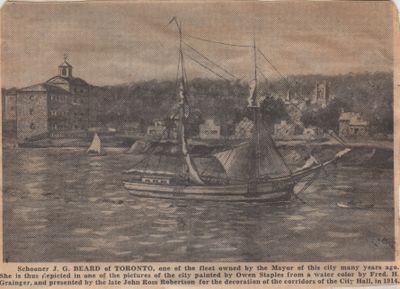