FIRST New Year's resolution to be kept is to release the convoy of "Schooner Days," held up since September, when the compiler went overseas and donned his gas mask and flashlight in the defense of London. London's able to look after itself between blackouts, thank God and the R. A. F. The compiler comes back to face a barrage like this from P. G. Smith, et al. —in fact a surprising number of "als.":

"Would like to ask if your excellent series of articles on "Schooner Days" has been permanently discontinued. I have been a very interested reader of the series for several years and have missed them very much of recent weeks. They would be more than ever welcome at present as a pleasant change from the war news which takes up most of our papers at present. There must be lots of good stories which you hadn't got around to yet and I hope you will be able to get them while there are still some of the old-timers around with first-hand information.

"Hoping for the early reappearance of 'Schooner Days, ' I am

There are many other communications to acknowledge, in fact it will take several numbers to deal with them alone and thus clear the decks for 1940, but meantime let us get on with the Resumption.

Yes, the Capital R is right, for there was a schooner of that name, about which this chronicler has long been curious. Perhaps some of the old Michiganders and other highflyers from "up above, " as we called the Upper Lakes, will oblige by piecing out her story with further information. Please do.

These eyes last beheld the Resumption twenty-seven years ago last summer. She was lying in Chicago Creek then, near the Twelfth street bridge; painted green, well kept up, with a squaresail forward, but no raffee, and a neat monkey-rail all round her, instead of breaking at the forerigging and the mizzen. Her Old Man was a Swede, and while he talked as good English as anyone in the State of Illinois and sobriety, he had no idea of how she came by her curious name. He had been in her for years. She was then in her thirties, a good burdensome vessel of the western lumber-hooker type, wider on deck and shallower in the hold than our Lower Lake vessels of the same tonnage. Her official dimensions are not to hand, but she probably registered around 300 tons, which meant she could carry 700 tons deadweight.

She then hailed from Chicago, and had been in the lumber trade out of Sheboygan, Wis. The late Capt. Jas. McCannel knew her in the time when she was racing with grain for the Collingwood elevator, storming in from Chicago, sometimes in three days and sometimes in three weeks, her hatches lifting with 20,000 bushels of corn. She came along with the Golden Age and the Golden West and the Red, White and Blue. Many a tall "three-'n'-after" was then making fortunes for owners in those great days of oak and canvas, when the prairies were turning from grass to grain and buffalo to beef.

The Resumption must have marked some noted and now forgotten development in lake shipping — perhaps an old firm coming back into sail after toying with the towing idea, or an old shipyard starting up again after the cruel war was over. Which one? The uncivil Civil War, of course.

The schooner trade had ripple after ripple of resumptions ere it ebbed into oblivion.

It would do the heart good to run down after school to the old waterfront some afternoon and find that the weathered broom (meaning For Sale) had disappeared from the masthead of the old Gleneiffer at last, and she was being fitted out again after her wreck near Long Branch in '89; or to find old Capt. Saul Sylvester directing the reconditioning of the great wooden derrick on his wharf at the foot of Church street, which had last been used to lift those huge blocks of brownstone for the City Hall for the Parliament Buildings, which had come on schooners' decks from Cleveland. Capt. Alex. Ure would be in with a schooner that hadn't been seen in Toronto in a schoolboy's years — the Antelope, or the Augusta, or the Reuben Doud, that "bull-of-the-woods" dragged down from the Wolf River into, eventually, Lake Ontario. Or perhaps some long laid-up timber drogher from Muir's pond at Port Dalhousie. Capt. Ure was "a great hand" at finding and furbishing these hidden treasures in the dustheaps of marine boneyards; they had usually gone through the phases of being profitable carriers as full-rigged schooners, then cut down to barge rig and towed, then laid up for better freights which did not come, then sold for a more or less melodious song.

Capt. Ure was a ship carpenter and rigger, and would refit them with the aid of Sylvester's derrick and such old-timers as remembered the difference between a Matthew Walker and a John Collins. It was fine to see new spars being dubbed down and smoothed round, to smell the clean pine shavings, and the Stockholm tar which permeated the bales of fresh red oakum, to hear the clink and ring of applewood mallets on caulking, making, reaming or horsing irons as the dried out seams were made and payed. It was fine, too, to see topmasts spiring up above the cross-trees again, after years of disuse, and to hear Nosey O'Brien or Andy Tymon "mind when that very vessel spread a t'gallan's'l and double-batwings forrad, and had ten men in the fo'c'sle and two mates aft."

Now, of course, or rather, then, for we are talking of her resumption of activities, she would have to get along with one mate aft and four men forward, or more likely three, for she was going to have one of those new donkey engines—an upright boiler that would work a steam winch, the predecessor of the gasoline winches of to-day.

Age as always rumbled darkly at these resumptions, and youth as always thought them grand. So they were. Youth was right. No good in disparaging a sunset or a sunrise because the colors cannot last. See all of them that you can, and look for others. It gets dark soon enough, but even a good blackout is interesting when you get to know it.

But to end with our particular Resumption, all that is presently known of her is that she really did pass through Death's Door, being wrecked on Plum Island in that gruesome stretch of water into Green Bay, off Lake Michigan, in 1914. Death's Door is a reality to lake sailors, so much so that there is a Door County in Wisconsin up there; around Green Bay, where the Door opens. Appropriately enough, Poverty Passage is close to Death's Door.

OUR HEROINE WITH BOOMS TOPPED UP LOADING LUMBER AT SHEBOYGAN, WIS. 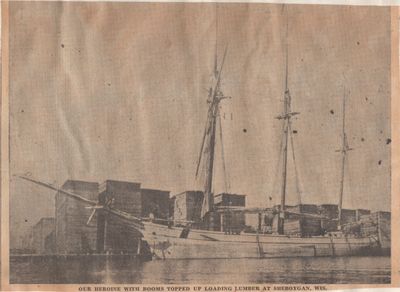