How pat the phrase rolls from the tongue of the luncheon club speaker, and how little either he or his listeners know what it means.

Senator W. H. Dennis of Halifax does, for he hails from the province where ships are still built of wood as well as steel—and the men who sail them are of tough charcoal-forged blacksmith-iron fibre. When the compiler of Schooner Days crossed the Atlantic in the first convoy of this war one of the most affecting, as well as the most inspiring experiences, was to discover eight Nova Scotian lads, hiding in the darkened corners of the promenade deck (all our ports were blacked out) conning instruction books, and shyly practising hand and flag signals. One would have thought they were planning a bank robbery—and here they were paying their own passage and brushing up all they knew on the way, in the keen hope of being accepted in the British navy, even in the submarine or minesweeping squads, if and when we got across alive!

Talk about the army of the Lord. He has a navy of his own, too. Those boys are the stuff that fought the Deutschland in the Rawalpindi and the Graf Spee in the Exeter.

Senator Dennis comes into the piece by sending up a marvellously beautiful portrait of the Bluenose, sailing queen of the Atlantic. It is all done in wood, a tribute to Nova Scotia’s industry and that beautiful wooden ship, designed by W. J. Roue of Halifax, sailed by Capt. Angus Walters, and encouraged to attain the championship of the fishing fleets of America by Senator Dennis’ generous provision of the International Fishermen’s Trophy. The woods used are Canadian maple, birch and oak, all of which, with Nova Scotian spruce, enter into Bluenose’s hull. Besides these, to give the necessary colors, there is holly and walnut from the United States, satinwood from the West Indies, and rosewood from the East, tulipwood from Brazil, harewood from England—unknown to the writer, but marked by coral and golden stripes—and some other unknown wood from France, dyed black for the border of the frame and blue and red for the flag in the picture. The portrait is done in marqueterie, or inlay work, and it is amazing how the natural colors and grains of the woods blend into a harmonious seascape—sails, gulls, ship, waves, clouds and foam all one perfect whole.

Thank you, Senator, on behalf of Schooner Days and Bluenose herself.

Told you there was a big fleet of Schooner Days hung up by war since last September, and only now getting away with the Old Man’s return from overseas.

Here’s a letter from Willis Metcalfe of South Bay, asking for particulars about the loss of the Maggie Hunter sixty years ago, and saying that the body of the Maggie Hunter’s cook is buried on their farm down on Point Traverse. Willis has been referred to the Schooner Days article telling all that was known of the wreck when it was written, but we shall visit that lonely grave before the next fitting-out service at Cherry Valley and see what further can be learned. Old residents in Prince Edward County say that the body was brought across from Sweatman Island, known to all sailors as the False Duck. Did the Maggie Hunter finish there?

Having gone into steam (for lack of surviving schooners in his jurisdiction) Rowley Murphy, of the Ontario College of Art, presented the forecastle head of his old love Sonia in bold vigorous black-and-white, with intricate detail beautifully shown, on his Christmas card. He has done the same thing, better because larger, in full color. He was down the Gulf again last summer, his fourth big haul of glorious material from our eastern coasts. The finest painting of his that Schooner Days has seen is a large detail of H. M. S. Nancy at anchor in her fur-trading days.

“These are the steamers I well remember:

“The Banshee and Champion, wooden passenger side-wheel boats, owned by the Canadian Navigation Co., who also owned the Corinthian, Passport, Corsican, Magnet, Algerian, Spartan, known as the Royal Mail Line, then known as the Richelieu Navigation Co. and later as the Canada Steamship Lines.

“I worked five or six years on the Corinthian and Magnet, both walking-beam engines and two stacks. The Passport had just one stack; the Corsican was burned at Toronto years ago and was a composite hull of iron and wood. The Spartan was later called the Belleville. Captains were: Farrel on the Corinthian, Sinclair on the Corsican, Trowel on the Algerian. This steamer was built as the Kingston and burned near Brockville, rebuilt and called the Bavarian and burned opposite Bowmanville in the 70s. The Corinthian was ashore in ’76 at Grafton, in a storm, when I worked on her, and the side-wheel steamers John A. McDonald and Chieftain pulled us off and towed us to the Montreal Cantin drydock, with a large boulder in her bottom. She was rebuilt, and I sailed on her next year.

“Then there was the old sidewheel Osprey and propeller Indian that lay outside of Brown’s dock at Hamilton as wrecks for some years; the Cuba, the Montreal, the Lake Michigan, Dromedary, Asia, Africa, both lost on Georgian Bay years ago.

“There was also the C. K. Roberts, built by Frank E. Kirby, naval architect, and later called the City of Windsor, which my brother-in-law, D. L. McKinnon and myself bought at Toronto from the Marshall, as tied up for breaking through a lock of the Welland Canal in the 80s and later called the Michipicoten or Minnie M. after we sold her. This will do for a starter, providing you care to revive the old steamboat days as you did the old schooner days. ”

Thank you, Mr. Kirkwood. Like the idea, but don't profess competence to execute it, but your fellow steamboat men may help.

And friend David Williams of the Collingwood Enterprise-Bulletin makes port with the third volume of the Huron Institute’s papers and records, being the catalogue of the 2,735 pictures and models in the Institute's fine collection at Collingwood. There are enough steamers in it to ferry the whole Canadian contingent to the fighting line. Schooner pictures, too, but not so many. The Huron Institute collection has the great merit of being displayed so that every Tom, Dick and Harry can see it, instead of being pigeonholed away and available only to collectors and specialists who know what’s there already. That has been the fate of too many collections, gathered with great care for the interest of every schoolboy and every member of Parliament, but denied to both by the public bodies to whom they have been entrusted. You can’t blame Dave Williams or the Huron Institute for such folly. Their policy is quite the opposite.

This third volume pays fitting tribute to the late Capt. Jas. McCannel indefatigable historian and friend of the Institute. 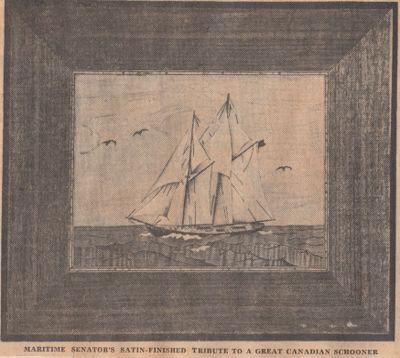