THERE was a maple leaf on the stern of the W. J. Suffel, and many a bigger vessel got a look at that maple leaf, for the Suffel was known as "middlin' smart." Not that she had a particularly fine model, but she steered well, which makes for speed when all's said and done, and she spread plenty of canvas. She was given lofty spars to begin with, and she was in hands that saw to it that she had plenty of fly-by-night or fancy kites to keep her stepping.

Take this picture of her making sail out of Port Dalhousie, in tow of the tug Augusta. It shows her with four jibs already set, the regulation number. She had a fifth one a jib-o'-jib or bluedevil, setting up high and outside of everything. It's still on the end of the horn, waiting for the order "H'ist away on that bluedevil!" as soon as the boys get the foregaff topsail triced up over the main topmast stay for setting and sheeting home. You can see it hanging loose on the wrong side of the masthead. Her little main topmast staysail, another of the fancy kites is already set. The bluedevil is invisible on the end of the jibboom behind the yacht's mainsail.

Laden deep with cut stone from Cleveland, she'd be at this time. The brown blocks will be unloaded in Toronto for the new city hall, so long a-building. Taking ten years to finish it! The year is 1890; the century will be out before the city council meets in the new chamber.

It all comes back with the card to Schooner Days for Christmas from Muir Brothers' drydock. The Muir Brothers have sailed far over the horizon far since 1890, but the drydock goes marching on, the oldest now in Canada. Built as a wooden box for repairing wooden ships (it was originally a floating dock) it has shifted smartly to steel and concrete and has for a long time now been the oldest operating drydock in Canada. More power to it.

As a matter of fact, the picture of the Suffel was 1938's Christmas card, repeated on request to Mr. Wm. C. Muir, nephew of the founder, Alexander the Great. This season's dry-dock card showed the schooner Ayr, the first the Muir brothers built in their new dock and shipyard.

The W. J. Suffel, to stick to our text, hailed from Hamilton in 1890, having been ashore on Burlington beach recently; but she was built at Port Burwell in 1874.

Two schooners bearing the unusual name Suffel came to Lake Ontario from Lake Erie in the 1870's, the George Suffel, built at Port Burwell in 1866 and owned by D. F. Rouse of Bath in the Bay of Quinte in 1877, and the W. J. Suffel aforesaid, built at Port Burwell eight years after the George, but owned by the same man for whom the George was named. George Suffel lived in the village of Vienna, six miles inland from Port Burwell, and owned several vessels, a third one being the schooner Two Friends. From the similarity of their names and dimensions it would appear that the Two Friends was also the Three Friends, a schooner built at Port Dover but under American registry when lost in somewhat mysterious circumstances in 1875. The story of her wreck and the suffering of the captain's wife and the heroism of the mate formed a chapter of Schooner Days a few years ago.

The George Suffel was a little thing, 72 feet long, 18 feet beam and 7 1/2 feet in the hold, measuring 75 tons. The W. J. Suffel was more ambitious, being 120 feet long, 26 feet beam, and 9 feet 8 inches in the hold. She measured 238 tons, and could carry 500 tons deadweight. Even this was not a profitable size, for she needed as many men as a full canal-sized schooner—four in the forecastle—and the canallers could carry 750 tons. With freights as low as they fell in the '90s, when 20 cents a ton brought coal from Oswego to Toronto, $150 was little enough for a voyage that might last a month and almost always took a week; and $100 was too little to pay wages, tow-bills and wear and tear.

So the W. J. Suffel pluckily tried the longer haul, from Cleveland to Toronto, with cut stone for the new Parliament Buildings and the new City Hall. It was a long, slow trip, empty one way, with many days spent in loading and unloading the huge blocks with the old horse-power derricks. A round trip, including the cargo handling, would take three weeks, and there would be two passages of the Welland Canal, where two days would be lost each way, climbing or stepping down the twenty-six locks. Arthur Terris, mate in the Suffel, used to tell of the varying luck with tugs. Sometimes one would come up Lake Erie all the way to Long Point from Port Colborne, hunting for business, and, might be jewed down—if there were no other vessels in sight—to as low as $75 to tow the Suffel to and through the canal and out into Lake Ontario, as the Augusta is doing in the picture. The Augusta had a very round snubby bow, being built short so as to go into the locks with her schooners or barges, and she was a favorite.

A hundred and fifty to two hundred dollars for tugs—for one would be needed at Cleveland and another at Toronto—and another hundred and fifty for wages of captain, mate, cook and crew, left scanty pickings for the grocery man and the ship chandler and the owner, out of a $500 freight.

Still it was a good life, and the Suffel managed to "pay," as the expression went, until the insurance companies got sniffy about her classification, and would not accept risks on her cargoes except at barge rates. While she still looked in her prime the tall topmasts were taken out of her in 1910, and she limped under lowers to a fiery death in Belleville. She was owned in Port Hope for some time in her Lake Ontario career, and later by the Corson family of Toronto, Capt. John Corson and his brother, Capt. Dolph Corson, sailing her for years.

Peace to her charred bones, and thanks to Hayocks for the card. Hayocks, pronounced like hay oaks, commemorates. the high oaks on the farm in Scotland whence came the pioneer Muir brethren. It is now Mr. Wm. C. Muir's residence in Port Dalhousie. You can see the Royal York and the Bank of Commerce from its windows of a sparkling morning. 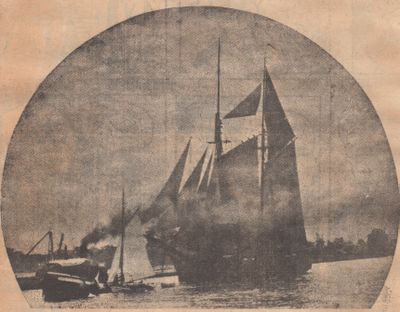