"IT was blowing a gagger of a gale from the eastward, late in the fall of the year, about '89 or '90, when I first saw that vessel with the maple leaf on her stern."

Mr. Samuel Thomas, of the Office Repair Company, 50 Jarvis street, was talking to The Telegram only yesterday about a picture of the W. J. Suffel, of Hamilton, which had appeared in Schooner Days the week before.

I was a young fellow but well grown, and could hold my own with any man, or so I thought. I was then in the carpentry trade, employed at Col. Wm. Kerns', M. P. P. 's grain warehouse at Burlington. I was taking out timbers, with a horse and chain, snaking them out of the lake to keep them from battering the underpinning of the warehouse down. The big seas were pounding on the beach, sucking the timbers out with the undertow, and then hurling them against the piling of the runway. The warehouse was full of wheat, and we thought we might lose it. I got on a pair of hip boots and waded out after every third sea, the big one, you know, to hook the chain on to another drifting log.

"My brother Will, who's in Vancouver now, came along with the Rev. Robert Abrams, the Presbyterian minister at Burlington. His son Howard is still in Toronto. They stopped and spoke to me, and as an extra big breaker sucked off from the beach I got a glimpse of a two-masted vessel scudding up the lake, a mile or more out Then the watchman came down to say that Col. Kerns said the schooner W. J. Suffel was in distress, and was trying to make shelter in Burlington Bay, if she could stay on top that long, and would we give any help we could if we saw her?

"Mr. Abrams had been a championship runner in England, and he started us off at a good clip. I was in my hip boots and it was hard going.

"My brother had his rubbers on. Mr. Abrams had his cane under his arm. Every so often he would turn his head and slow down so as not to wind us. He knew all about running.

"It was a mile and a half round to the piers, but we didn't take long to get there, in spite of the wind and the snow. The lake was wild. The storm was so bad it had already washed the sand out under the railway tracks in places, and the lake was pouring into Burlington Bay. This may have been the storm in which the Gleneiffer lost her foremast and went ashore at Long Branch and the Annandale drove ashore at Lorne Park. I don't know. We were farther up the lake at Burlington, and felt it worse.

"We could see the schooner coming as fast as we came, lurching and rolling like a drunken man. Every third sea seemed to flood her completely. Her black hull dropped completely out of sight. Each time we wondered if she'd come up again.

"Her crew would have been washed overboard and drowned if they had been on deck. We could see them hanging in a bunch in the rigging, six or seven of them, twelve feet above the rail. The wheel was lashed, the sails were down or blown away, and the schooner was just driving before the wind and sea and the snow. With the wind right behind her from the east she was going blind for the pier ends.

"I got on to the north pier. The waves were washing clean over it, and the end was under water most of the time. 'Look now,' I said, 'if the sea washes me off it will throw me into the canal'—that's what we called the channel into Burlington Bay. 'If I go into the canal you stand by to get me.'

"'We will,' Mr. Abrams promised. "I made a run for it, jumped when the first sea broke, backed up a little for the next one, and then ran forward again. This way I got out to the pier end.

"The schooner, with her wheel lashed, couldn't make the entrance. I thought she would split on the pier end. The backwash sucked her off that, though her stern did touch, and then another big wave washed her in on the north of the pier, past where I was.

"It's hard to believe it, but those men were so chilled with the exposure I could hear their teeth chattering in their heads as they washed past me, hanging in the rigging.

"'Heave a line!' I yelled, but they couldn't. All their ropes were frozen and they were stiff themselves in the rigging.

"The schooner rolled back and forth in the undertow on the north side of the pier, now thrust towards the beach, a few hundred yards inland, now sucked out by the backwash. I took a flying leap from the pierhead. I didn't think I was going to make it, but she came up in the nick of time, and I just caught the round of the rail, and hauled myself aboard.

"The halliards were washing about in the snow and ice and frozen piles of the deckload of coal. I ran to a coil of rope, pounded it loose, and hove with all my might. My brother and the Presbyterian minister grabbed the coil cleverly and commenced to haul in. I bent the end of a bigger line to the light rope, and so they got a hawser out and made it fast to a bollard on the pier. Then a few turns around the schooner's capstan. It was frozen solid. When the strain came on the line I'd ease it, so that neither it was parted nor the capstan torn out of the deck. By easing and taking up on the slack we worked the vessel in close to the pier with the surge of the seas. The way the wind was the pier gave her a little shelter.

"'You look after the men and I'll look after the line,' I called, and, watching their chance, my brother and the preacher jumped aboard. They did more of the rescue than I did, especially the Presbyterian minister. The men in the rigging were so numb they couldn't move. My brother and Mr. Abrams had to cut their frozen lashings and lower them one at a time and haul them out on the pier.

"The captain was the first to find his voice. 'Twenty-five years of my life gone to hell,' he cried, waving at the schooner. 'There's a brace of pistols in my cabin, and if I could lay hands on them I'd follow the vessel.'

"Anything to oblige. I dove into the cabin through the icy Water and found the pistols in his desk. 'Give them to him,' said Mr. Abrams, and I did. I heard him say to the captain; 'Here are your pistols. Dry them out and oil them well or they'll be spoiled. Thank God for His mercy in saving your life, and don't talk nonsense about throwing it away. Come with me.'

"He led us along the streaming pier and across the railway bridge over the canal, to the tavern Perry used to keep, afterwards, on the south side. I forget who kept it then. The sailors could barely stagger through the snow. Mr. Abrams saw to it that they all got thawed out at the hotel and at Capt. Campbell's cottage, the lighthouse keeper's, and we all went home. "

Next time Mr. Thomas saw the Suffel she was coming out of Burlington Bay, shining like a million dollars. Her bearded captain hailed as she passed, "Ahoy, mister! You're the man who got a line on to the pier and saved this ship, ain't you? "

"Thought she was a total wreck along with twenty-five years of your life, " laughed back Sam Thomas.

"No sir! " said he. "It only cost me thirty dollars to get her off the beach, and she's as good as new. And what's more, I've got a wife too, now, all through that, and settled down to live in Hamilton. We're on Wellington street north, and any time you want a trip send a postcard, and the Suffel will take you wherever you want to go."

That was true. Capt. Corson might well be cheerful over his rescue at Burlington Piers. For not only did his ship get off almost scatheless but he had courted and won a bride in Hamilton during the following winter, and lived happily for twenty years afterwards, sailing schooners and steamers.

And When He First Saw the "W. T. Suffel"

Four Generations of the Thomas Family 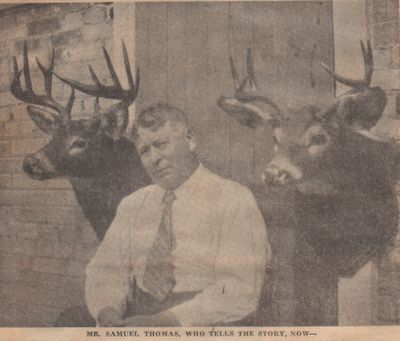 Four Generations of the Thomas Family
Groups of Related Records