GARIBALDI was a favorite name on the lakes in the 60’s. This is hardly explainable on the sole ground of Canadian acclaim for the hero of 19th century Italy, although the great patriot was popular enough to have a garment named after him. Even in the last quarter of last century little boys were wearing “seersucker garibaldis,” which were small blouses made of linen or cotton in striped patterns. What made Garibaldi a desirable name across the stern of a sailing vessel was the fact that Garibaldi had been a sailor himself, first in the Mediterranean navy, then as a cruiser under letters-of-marque from the Brazilian Republic, and later as a merchant skipper out of New York. All this was before he led his triumphant red blouses in the march on Naples and redeemed Italy from the foreign foe.

The first vessel to bear the name Garibaldi on the lakes, as far as records go, was a scow built in Chatham in 1854 by someone named Mackay. She is said to have been sloop-rigged. This is rather hard to believe, for she registered 80 tons and carried a deadweight load of 120 tons. She was some 75 feet long. For a single-sticker of such size a mainsail as large as a 300-ton schooner’s would be required, with a correspondingly large crew. We had some large cargo sloops in the Bay of Quinte, but not that large.

The Chatham-built Garibaldi was a schooner by 1862 at any rate, for there is on record a “protest,” or declaration of damage recorded for insurance purposes, which shows she had the two-masted schooner rig, in that year. Capt. Robert Harkley, of Owen Sound, was then her master and owner, and Thomas Creighton was his mate. The protest was filed Sept. 19th, 1862, on arriving in Collingwood with 4,000 bushels of Indian corn, 10 barrels of pork, and a coil of rope, loaded in Chicago.

It is worth considering that eighty years ago little butt-ended scows like the Garibaldi, no larger than Toronto ferries, carried the commerce of the new west on long voyages, as arduous as ocean crossings to-day, except for the menace of mines and torpedoes.

The Garibaldi was thirteen days on the six hundred miles from Chicago. She had to seek shelter in Duck Island in Lake Huron and later went into Rattlesnake Harbor in Horse Island in Georgian Bay for shelter. Her foresail jibed in the wild sea (proving her schooner rig) and she lost the jaws of the fore gaff, the foresheet, and foreboom guy. She kept her pumps going during the gale, but got no water until she went into Duck Island. Probably she was rolling so hard the pump would not suck.

On another occasion, caught in a gale, the Garibaldi had to cut through her forecastle and cabin bulkhead so as to get at her cargo of wheat, and jettison it by the bucketful through the forescuttle and cabin companionway, throwing enough cargo overboard to lighten herself and avoid foundering. The crew dared not take the hatches off for fear she would swamp, or at least wet the grain from above. Then the swelling cargo might have burst her, as happened to the James G. Worts and the Mary Grover.

On Oct. 9th, 1865, the same Garibaldi filed another protest on arriving in Collingwood. This time she had only come from Meaford, just around the corner. She had loaded 3,653 bushels of spring wheat, when the wind came in, making it unsafe lying at the wharf where she was loading, so she beat out and spread her wings for Collingwood. On the way she had a very rough passage, short as it was, and she was leaking so badly Tom Creighton, who had succeeded as master, and John Seal, her new mate, feared the grain in her might be damaged.

The leak was stopped, and she went out for more grain. Off Thornbury, about halfway between Meaford and Collingwood, she was again caught, and went down with all hands before she could be run ashore. She drowned her captain, mate and two sailors, one of these a brother of Capt. McDougall, of Owen Sound.

Then there was another Garibaldi, which, to revert to the boys’ blouses already mentioned, was certainly in kiddy size. The late Capt. Jas. McCannel had a photograph of her from Mrs. Carrol Paul, 505 Eastridge street, Marquette, Mich., not long before he died. This showed a square sterned fishboat, about thirty feet long, with a high cabin built amidships, over the centreboard box. These mackinaw fishboats, whether square sterned or sharp sterned, used to be more plentiful than blackberries (on the lakes!) between the Straits of Mackinaw and the Bay of Quinte. They were shoal bodied, and like a big rowboat, usually clinkerbuilt, or lapstreaked. Even with the high cabin top there could not be much more than four feet headroom in the little cabin.

This fishboat had a true schooner rig, with mainmast higher than the foremast, and a little schooner’s fly or wind vane at the masthead. The mackinaws had really a sort of ketch rig, their aftermast being shorter than the foremast, although it was called a mainmast and spread a good sized sail, owing to the long boom. It was almost as large in area as the tall foresail. This littlest Garibaldi had mainsail, foresail and jib in proper schooner proportions.

What makes her worth remembering is that she was said to have been used by Gen. U. S. Grant in an exploring trip up Lake Superior after amethysts, topazes, porphyry and mineral specimens. (Like everybody who has been to Lake Superior the compiler of Schooner Days has his own piece of amethyst). Grant is said to have made this voyage in her in 1868, just after he got the great American War under hatches. If so, he had modest tastes in cruising. The boat—for she was not much more—is said to have been built at Port Rowan on Lake Erie.

Port Rowan is given by Thomas’ Register as the birthplace of the hundred times larger Garibaldi of Hamilton, whose adventure at Weller’s Bay was recounted in Schooner Days last week, the builders of the bigger one being Wolverton and Woodward in 1863, and her owners then Woodward and Kilmaster of Port Rowan.

Butt-Ended Scows Like These Once Traded All Over the Lakes

The GARIBALDI of OWEN SOUND was a scow like these two. One was photographed at Racine, Wis.; the other off Kincardine, Ont. 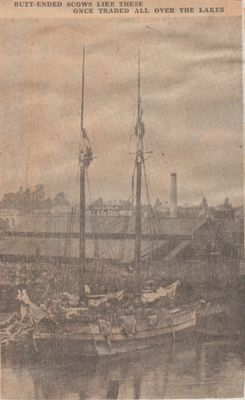 off Kincardine
Groups of Related Records