By C. H. J. Snider and a Couple of Captains

Is it better with you, you brave, bluff - bosomed beauties, long since burned or wrecked or rotted, when your names are mentioned, and someone says "Ah, yes, I remember...?"

We like to think that it is, that the comfort of kindly recollection is a balm to the bruises you got in your few or many years of endurance of owners' urgency for dividends, and the hammerings captains gave you and the manhandling of greenhorn crews, and the ceaseless nagging of the winds and the waves and the docks and the beaches.

It is pleasant to imagine that when someone speaks of the old Resumption or the Erie Belle or the Orphan Boy or the Two Friends or the Queen of the Lakes there is a little throb of happiness somewhere among the sands or the boulders or the boneyards where these stout ships lie buried.

It assuredly warms the heart of Schooner Days when an envelope comes in from Port Hope or Parkdale, as two did last week, and picks up the tale of such an old-timer as the Garibaldi. When we began recalling her this month she was an all but forgotten memory of Jarvis street slip. But Capt. G. D. Frewer, well known compass adjuster and principal of the Toronto Nautical School, writes:

Sir, —I was very interested in your article in last Saturday's Telegram entitled, "The Last of the Garibaldis. " Captain Jack Breen was an old friend of mine, and spent his latter years in Peterborough, Ontario, where he was well known as a capable shipwright.

I first knew him in 1907, when he and his brother-in-law, Bill Hickey, helped to design and build a steamer, the "Otonabee," for use in the Kawartha Lakes. Jack was a very likeable old chap, and certainly knew his job.

Several years later the sea-cock of the "Otonabee" burst during the winter, and she sank in Little Lake at her moorings when the spring thaw set in. Jack Breen was in charge of raising her, and as we needed heavy tackle to do this he suggested that we drive to Port Hope and get the anchor chains of the old Garibaldi, which had long since been abandoned, and whose ribs and some fittings were all that remained of her. We got a diver and managed to salvage some of the anchor chain which was just what we wanted for our job. As far as I know, that old chain still lies on the dock at Ashburnham, Peterborough.

Your articles are especially interesting to me as I spent my first six years at sea in sail, though they were all deep sea square riggers.

I thought this little additional fact about the last "Garibaldi" might be of interest to you.

And another good friend of Schooner Days, Capt. R. J. Edmunds of Port Hope, now in his 82nd year —he commanded the Mary Ann Lydon, Aurora, L. D. Bullock, E. H. Rutherford, Jessie Drummond and other vessels—tells of the Garibaldi, in which he sailed as a boy:

".... on which schooner I got two of the greatest scares in my life."

"When I first sailed in the Garibaldi she had, as all other vessels out of here had, hemp rigging, which afterwards was changed to wire, as the hemp rigging was so expensive to keep up.

"We had loaded plaster stone in Oswego and were unloading in Port Hope. The crew was 'tarring down,' or in other words coating the hemp rigging with a fresh covering of pine tar to keep it from rotting from exposure to weather.

"The mate, named Hodge, was a salt water man and as I was the youngest of the crew (three others besides me), he gave me the job of tarring the triatic stay. If you don't know what that is, it is the stay that runs from the mainmast head to the foremast head, to hold the mast steady. On the hemp fore stays we had to use large wooden hanks to fasten the staysail, or the jibs, to the stays.

"These hanks were somewhat like the wooden masthoops used to hold the luffs of the other sails to the masts, but instead of being bent to a circle the ends were notched and crossed in a sort of self-locking device, so that they formed a wooden loop. This hank was, of course, less wearing on the hempen stays than the usual iron ones would be. They were all right for wire rigging.

"This mate took one of those large wooden hanks and snapped it on the triatic stay and fastened a boatswain's-chair to it, then fastened a pot of Stockholm tar (not coal tar, of course), to the chair, then told me to get in the chair and tar the stay. This I proceeded to do, hanging from the stay itself in the chair, fifty feet above the deck, with nothing but air under my heels. He told me not to touch the hank with the tar, so I kept one hand dry, and with the other, covered with an old mitt, I did the tarring.

"I could pull myself along the stay with the dry hand quite easy, but after I got to the centre of the stay I found I was going up hill, for my weight had sagged the stay so it was not too easy going.

"I got across, all right, and I felt safe when my feet touched the forepeak halyard blocks. In trying to shift myself and to take a rest, to finish the end next the foremast head, the hank got back on the slippery, tarred part of the stay. Then away I went, nearly back to where I started from. The tar spilled out of the pot on the men working below me, and did they holler!

"This salty chap who was mate came up to the fore crosstrees and threw me a heaving line, and so pulled me over. I blessed him when I could talk. And he blessed me. I found out afterwards he should have used both the main and fore gafftopsail halliards, slack one and pull on the other. In this way they had control of the one in the chair from start to finish.

"That was scare No. 1. Some years afterwards I was on the Garibaldi again. We had loaded coal in Oswego for Port Hope, and on the way up we had some heavy thunder and lightning storms, or squalls. The heaviest was about tea time. As I had been at the wheel from four to six, or if you like, the first dog watch, I had been relieved and was having my tea, when the lightning struck the fore topmast and came down the topmast rigging and ran along the deck. Colin Wallace, the owner's youngest son, who was on for a trip, was knocked senseless. It knocked me out of my chair in the cabin, and knocked the knife out of my hand. I was not hurt but just stunned. They carried Wallace into the cabin, and in less than half an hour he was all right again. This boy was about 17 or 18 years old. I have seen him once since, a good many years ago.

"The wind had died down some, and Capt Uglow wanted to know how much damage had been done aloft, so he sent me up to shake out the fore gafftopsail. It was still thundering and lightening and I was scared near to death, but up I climbed, I had to. The ropes were not burned or hurt, so the fore gafftopsail was set. The lightning had cut the truck or button at the top of the topmast in two pieces. The truck was made of hard lignum vitae, the same as the sheaves of blocks.

"When we got to Port Hope we took the topmast down, cut about a foot off where it was splintered, and put a new truck on. The grain of the wood of the topmast was twisty and the lightning seemed to have followed it. The lightning only came down about four feet. We put the topmast back again and as far as I know it was in her when she was dismantled,

"I remember one time we left Toronto in the Garibaldi about the same time the Richelieu and Ontario steamer left (the Corinthian). She had to call in at Bowmanville on the way down. We were in Port Hope as soon as the steamboat, wind norwest, fresh.

"I sailed on the Garibaldi at different times and in her earlier days she was a fine looking schooner, rather a full stern but very fine under water and kept spick and span. She was owned by Robert Wallace, who was a grain buyer and shipper who had a large warehouse at Port Hope. He had another vessel called the D. Freeman. Her Captain's name was Jimmie Haddon, or "the Port Hope infant," called so because he was a very large man, over 300 lbs., and something over six feet. In those early days Capt. Tommy Uglow was master of the Garibaldi. Uglow was the smallest man and Haddon the largest around the lakes.

"Some of Capt. Uglow's family are still in Port Hope and some in Toronto. He was drowned coming aboard one night in Oswego.

"You will notice that the Garibaldi's fore stays were fastened to her knight heads. I don't know of another schooner her size that had the same. That gave her room for the four jibs that she had. She was a good lumber schooner, which was what was wanted in her early days. Capt. Wm. Braund owned her after the Wallace people had sold her and I was mate on her then for some time with Capt. Braund.

"My experience is that a good sailor can keep any old tub afloat, but a poor sailor could not keep the best of vessels off the beach. That being the case, they put the blame on the vessels, when it was their own fault.'

If Toronto were the capital of Sweden, wood-schooners would sail through the City Hall courtyard. Stockholm's $6,000,000 city hall, which challenges the world for beauty, has schooners spearing their bowsprits past he mayor's office window all day long. The picture illustrates a Schooner Day article on the Standing Gaffers of Finland and the Baltic, to appear shortly, with more photographs from Helsinki and points north. 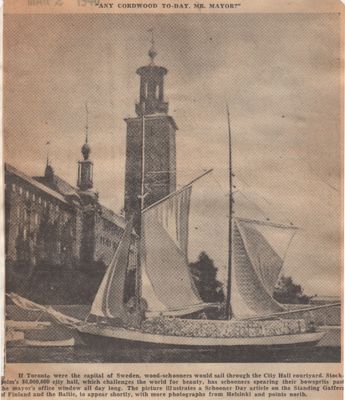