She stands by herself among many schooners the compiler of these records can recall, and he has seen Finnish standing-gaffers, English billy-boys, market packets in Barbadoes, salt bankers of Nova Scotia, New Brunswick jakes, Syrian leg-o'-muttons, and New England six-masters, in addition to most of the centreboarders of the Great Lakes.

This Garibaldi of Port Hope took the cake. Port Hope was not her birthplace, but her port of registry and ultimately her place of burial. Her admirer last saw her among the rag-tag and bobtail of the stone-hooker fleet that used to huddle in West Market street slip.

It was many a long day since she had classed high enough to carry grain. It was some time, indeed, since she had shared with vessels of her size in the less profitable freighting of soft coal slack for the Toronto Electric Light Works at Scott street on the old front. Yet, even reduced as she was to the last occupation of the laker, carrying beach stone, she kept her dignity. Surrounded by the box-shaped dingy stonehookers, with their dirty white paint, bleached masts that never knew the slush bucket, and bulwarks gaping like broken fences on the back forty, she looked like some decayed gentlewoman among a crowd of ragged urchins, to whom she would, if she could, dole out cookies.

As long as could be remembered she had worn the same suit of paint, faded green, below faded black upperworks, picked out with a white line of coveringboard and white oval of hawsepipe; buff across the stern above the white nameboard, and blue under it. Her decorations were a neatly turned cannon barrel figurehead, with a tompion in its muzzle, at her cutwater, and her warlike name, cast in iron letters all in one piece like a neon sign, and repeated on bow and quarter against the white background of her topgallant rails.

She must have been a beautiful vessel originally. Her layout was unique. Instead of the usual square "house" near the stern for a cabin, with an alleyway on each side of it, a short quarterdeck was carried across from rail to rail, and all her cabin was below this. It was lighted by a skylight, and by deadlights in the stern. There was a small well or cockpit for her steering wheel. The arrangement was unusual for the lakes, although common on salt water in the old days.

She had been good friends with the blacksmith at her outfitting, for she had slim iron spreaders, like a cat's whiskers, instead of the usual heavy wooden spritsail yard across her bowsprit end, and the cast iron nameboards mentioned, as well as three chain bobstays. And if memory serves correctly her chainplates were round iron rods, doubled around the deadeyes and chainbolts, instead of the usual flat straps.

In those days, when the schooner era was drawing to a close, they said the Garibaldi was slow. This was then true, because she was in such shape of hull and outfit that she was never really sailed. She had an old black squareheaded mainsail that looked only half hoisted and left a big space below the foot of the baggy gafftopsail which it could not properly extend. Her other sails were to match; she leaked so badly she had permanent troughs built to carry the water back to the lake from the pumps, and she had hogged so much that the name on her stern was out of sight whenever Jack Breen dared to really load her. Most of his trips were weather-watching runs along the north shore of Ontario, with stone for the cribs of Toronto's expanding waterfront, or for the crusher, whose ministrations were turning Toronto streets from macadam to concrete. Jack Breen's family of little children lived aboard the schooner and he had some sort of co-operative arrangement with his crew which worked well but not arduously. With such a charge and such equipment it was impossible to "make time," and inevitable that the vessel should be called a slowpoke.

Yet older sailors maintained she "usta be smart" and cited the jibtopsail she once had, "seventeen cloths across the clew." You may know a lot and still not know what that means. A "cloth" was a strip of canvas of the full width of the roll or bolt in which it was woven, and seventeen cloths would be somewhat more than thirty-one feet, the standard cloth width being 22 inches. Such a sail would be large for a laker of double the Garibaldi's tonnage. She registered 123 tons, and her official dimensions were: 95.2 feet on deck, 24.8 beam, 8.3 depth of hold.

Other captains shook their heads at Jack Breen for taking his family with him in such a decrepit bag-o'-bones as the Garibaldi became, but Jack went his way with her. He would wait for his weather and venture out with another load of stone, for Toronto, or even down to Charlotte in the fall of the year for the last load of screenings for the Toronto Electric Light Co. One December (in 1897 probably), having replaced that ugliest sail ever set on a lake schooner with a smart high-peaked racing mainsail which the yacht Oriole II had outworn, he sailed in a nor'-wester and was home in Port Hope in six hours after rounding the lighthouse on the Eastern Gap, Toronto. No yacht in the "Annals of the R. C. Y. C. " is credited with making better time.

The Garibaldi of Port Hope seems to have been built at Port Huron and transferred to Canadian registry at Sarnia across the river, for two Garibaldis of identical dimensions, which fit her, are on the earliest Canadian government register. One has W. B. Clark, Sarnia, registered owner and the other Robert Wallace of Port Hope. Seemingly the same vessel registered in two places, in 1874. Tradition said that she had been built as a tug; perhaps she was commenced as such and finished as a schooner, for there were no indications of the round stern and straight stem of a tug about her. She was really yachtlike in her shape under water, so sharp-floored the keelson was the only place you could stand on comfortably in her hold, and so sweetly curved there was nowhere in her that a broomstick would touch with both ends and the middle. She was so quick in stays it was said she threw the watch off their feet every time she came about. Perhaps.

Mrs. Knight, an old lady who was cook in the Vienna in 1895, had been in the Garibaldi earlier. She said the schooner then had a Bible in the cabin and on the flyleaf was writing saying that the Good Book was presented to her captain on the occasion of her first voyage from Sarnia to Montreal—a long haul for a small ship—in 1857. Perhaps she had just been transferred to Canadian register, or rather British register, for this was before Confederation, and many Upper Canadian vessels were registered at Montreal. She was owned in Toronto soon afterwards (1864) by Richard Tinning, the wharfinger. Thomas' Register for that year gives her building place at Port Huron, her builder as Pickering, and her launching date as 1861, which conflicts with the Bible story.

Will Wakely of Port Hope was mate in her about 1874, and Capt. Peter Shaw or his cousin, Capt. Malcolm Shaw, sailed her for sometime afterwards "out of Cat Hollow," that is Lakeport, where she was extensively overhauled and repaired in the 1880's.

That is about all remembered of the Garibaldi of Port Hope, except that her foretopmast was spiralled with a lightning burn from truck to heel, but never splintered; and she was said to be "hanted. " But no one ever said how or why.

"With an Old Black Mainsail That Looked Only Half Hoisted." 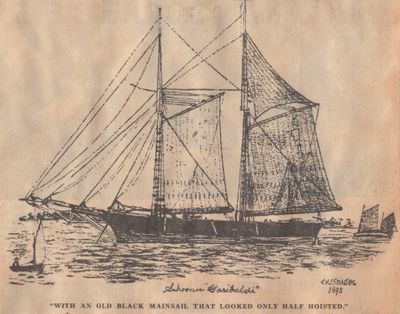