Mention of her among the old-timers whose long-dead hearts may throb sometimes at being remembered may have puzzled the reader as much as the writer was puzzled when he saw her in Chicago twenty-eight years ago and no one could tell him why she was so called.

The quaint name served as a headpiece for the resumption of Schooner Days after coming back from the muscle-bound Western Front last December. An appeal was then made for light on the reason for her name, and as always it has secured an answer.

Mr. Henry N. Barkhausen, of 232 East Walton Place, Chicago, also a lover of schooners and schooner days, thought so much of the “mackinaw boats” which once fished in hundreds on the lakes and are now almost extinct, that he had one built by Watts in Collingwood in the summer of 1938, from a square-stern model of fifty years before. Collingwood. as we all know, was one of the great fishing centres, sending fleets all over the Georgian Bay and the upper part of Lake Huron. Collingwood in general favored the sharp-sterned model, but square-sterns had come in by the 1880's.

The boat the Watts built for Mr. Barkhausen appears to be thoroughly typical, except for her smooth skin, Nearly all the "macks” were clinker built, the lapped strakes of their planking making a lighter and stronger job, but there were always some carvel-built or smooth-skinned boats in the fleet.

In sending a picture of his 1938 mackinaw — appropriately named "Butcher Boy” to recall the times when Sailor’s Lass, Maid of the Mill, Star of Hope, Willing Worker, Daily Bread and so on were favorite names—Mr. Barkhausen mentions the schooner Resumption, which he knew well. He says:

“Her tonnage was 293, and dimensions 143.4 length. 29 feet beam, 10.3 depth of hold. She was built in Milwaukee, 1879, by the well known firm of Wolf and Davidson, who turned out such famous schooners as the Moonlight, Marengo, Alice B. Norris, James Mowatt and the Lem Ellsworth.... Perhaps because the builders hadn't built a schooner to my knowledge since 1874, or a boat of any description since '76, they decided to name the new vessel launched in 1879 the Resumption.

The schooner Ford River was also launched the same year. Other schooners followed, but the five-year gap between sailing vessels may have occasioned the unusual name. As you say, she was wrecked on Plum Island in 1914; a year or two previous she went on the Gravelly Isle shoal, but was pulled off. A picture taken at the time shows her still in apparently good shape. During her last years she was carrying lumber out of Ford River and Wells.”

So ends the mystery of the Resumption's name.

Returning to Mr. Barkhausen's Butcher Boy, it will be noticed from the picture that he sails her with topsails set flying on light topmasts above the customary lower masts which were all the perpendicular spars most mackinaws had. These racing topsails make her step, and he has had some good sailing in Butcher Boy in hard November breezes with the topmasts down.

Perhaps it will be noticed that the Butcher Boy is spoken of as a “boat.” If there is one nautical word more abused than “boat” it is time the Allies floated a loan for its assistance. Every landlubber feels entitled to call the Queen Elizabeth a “boat”; also his gravy container, his motor car and his left and right shoes—a relic possibly of bucolic influence. They had stoneboats on the farm, where the landlubber started.

Yachtsmen and sailors are sometimes as bad in misusing the word. But the Butcher Boy and most mackinaws are properly called boats because they are open. That is, although they may have decking here and there, they are without a continuous deck, and the crew move about in a cockpit or central space. That seems to be the one common characteristic of "boats”; at any rate it is a safe guide for the use of the word. Some mackinaw yachts had cabins built over the cockpit opening. Mackinaw craft were almost schooners in rig, but not quite. The rig was a variant of the ketch, the after mast being shorter than the forward one and the bowsprit long.

Standing topmasts, or topmasts at all, were unusual in the fishing mackinaws, but flying topsails were often set, to help them along when the wind was light and threatened a white-ash breeze. Fishermen had to row the heavy boats immense distances in the calms. The topsails were useful on the long passages to and from the fishing grounds. Lake Huron had several topsail mackinaws, and at least one three-masted one. Here are photographs of her taken off Kincardine.

A three-masted mack! Can you tie that?

Mr. Barkhausen has a model of a three-masted full-rigged ship with the name Hannah Taylor of Corunna on the transom, and would like light about this vessel.

But there was and is such a place as Corunna on the lakes, as well as the Corunna in Spain, where Sir John Moore fell and was buried. Corunna, Ontario, is a village on the St. Clair river, below Sarnia. It is above Mooretown and in Moore Township, and the whole area is strongly flavored with Peninsular war background, for among its early settlers were Wellington's veterans. The township had plenty of good timber eighty years ago, and built some craft, possibly the Hannah Taylor among them. But Mr. Barkhausen's information is that the Hannah Taylor was originally the brig David Smart.

A brig is a two-masted vessel, square-rigged. He quotes a record of a brig named David Smart or David Stuart being wrecked off Chicago in 1857. It is possible that the Hannah Taylor was this same vessel, refloated, renamed and reregistered at Corunna. Schooner Days would like to hear more of her.

Rarity of the lakes—Mackinaw threemaster, with a topsail too. This novelty was photographed in Kincardine last century. 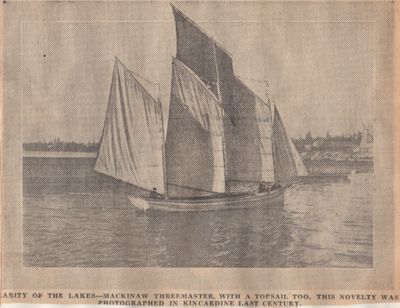