THOSE BRAVE FINNS, and may they yet win in spite of hell and Hitler—have a rig in their home waters which was expounded to the shellbacks the other day, and which may interest old-time schooner men as much as modern yachtsmen. Montye Macrae, owner of the schooner yacht Anitra, sportingly offered The Telegram his schooner to try the new rig on (at our expense), but before we could take him up the government requisitioned Anitra for war purposes, so that's out. No others need apply. If you want a thing done well, you know, you must do it yourself.

When the writer was in Finland before this war and winter it did the heart good to see so much local commerce in sailing vessels. We all know of Gustav Ericsson's collection of steel square-riggers, of all nations originally, which he centres at Marienhamnen and sends on voyages to Australia or wherever he can get a cargo. But what we are talking about are the little wooden sloops and schooners that bring in peas and potatoes and pulp and cordwood and fish and garden produce from the farms to the Finnish coast towns. Finland's biggest crop is wood — from ship-timber to plyboard — and much of this moves in the little coasters.

The Sudrahamnen or south harbor of Helsinki was crammed with coasters drying sails and marketers filling their baskets, under the far off dome of the Great Church peering benignly over the pediment of a fine row of market buildings. A big black sloop was coming in lickety-pelt, with everything drawing like tractors. She had to keep all sail on to combat wind and current, and she seemed certain to impale herself on a dozen bowsprits in the crowded harbor. It seemed impossible to stop her in time. Sailcraft have no brakes. At the last second her mainsail disappeared as by miracle, her headsails gave her the necessary cant, and then ran down as fast as water out of the tap, her topsail dropped to the crosstrees, and she rounded into a berth like a scarlet Telegram truck easing into the loading platform.

This brings us to the peculiar rig the Finns use. It may justify the home-made term "standing gaffer" until someone finds a better. We took a lot of photographs of it in Finland and in Sweden. None in Russia.

The black sloop's mainsail did not lower down slowly in billowing folds like a collapsing circus tent. That is the great difficulty we have with our gaff rigs; the sail is much harder to lower than to hoist, especially while it is full of wind. This big mainsail just disappeared, like a rolled window blind.

After it had vanished the gaff which held it up was still in position. In fact the topsail was still set above it, something quite impossible in our lake navigation. In the schooners we had, and in the gaff rigged yachts' which survive, the gaff is a spar set at a sharp angle to the mast, and it extends the head of any sail which is carried abaft a mast. The gaff has jaws, and travels up and down the mast, carrying the head of the sail with it.

The sail is laced to the gaff, and attached to the mast by hoops. When the sail is lowered it descends upon the boom, which extends the foot of it, and is stowed in folds between the boom and the gaff, which are now parallel. The gaff is hoisted by throat and peak halliards, and the sail goes up with it in the process.

It is furled by letting go the out hauls at head and foot, and gathering it in folds to the mast by pulling on the brails and inhauls. As the gaff is set at an angle gravity brings the head of the sail in without much assistance, and the rest follows. Brails, lines which girdle the sail draw it tightly to the mast in a series of sausage links.

Most of us will remember when the lake propellers and even passenger steamers had a bare gaff on the foremast, a gaff that was stationary aloft, and flew an ensign at its peak. Some of us will remember when that gaff always carried a sail attached to the gaff by rings. The sail was used less to help the steamer along than to steady her when rolling in a breeze. The old Chicora used to have one, (she had two when she was a blockade runner), and the Resolute had one when she went down off the foot of Dufferin street thirty-five years ago. They were quite common then.

Well, this is the standing gaff rig which the Finnish coasters employ, and which they have developed to a nicety. It is very ancient, for something like it is shown in the pictures of Charles II's royal yacht, first of her kind, and it was employed by many of the privateer schooners in the war of 1812. They would lie a-hull, that is, under bare poles, till their prey came along, and could get under weigh instantly, for flight or pursuit because their sails were already hoisted and had only to be hauled out to catch the breeze.

The standing-gaff rig has not survived on the lakes for a number of reasons, the principal one being that all sail has gone out, except for yachts. They run so much to the jib-headed rig anyway, and are so properly careful about excess weight and windage aloft, that it is unlikely that the standing-gaff will reappear among us. But it has certain merits in setting and shortening sail simply and quickly that would appeal to the short-handed cruiser.

The standing-gaff continued to be used on steamers on the Great Lakes long after the last commercial schooner abandoned it. The only lake vessels recalled as using it were the Erastus Corning, built at Tonawanda in 1867 and wrecked on Poverty Island, 1896, and the Annie Sherwood, a fine big American vessel, 184 feet long, 33 feet beam, and 13 feet depth of hold. She registered 630 tons—very large for the lakes. She was built at Fairport, Ohio, in 1866, and sailed until 1903, when she was lost on Lake Superior with her captain and two of the crew.

Finnish coasting schooners have standing gaffs on both masts. Often the spring stay or triatic stay is, omitted, and the mainmast is supported by two headstays, leading to the deck at either side. The foreboom is shortened to clear them.

The Swedes employ the rig very largely, too. Its great advantage is that sail can be made and taken in from moment to moment. This is a mighty help for small crews, and keeps the vessel under control and regulated speed at all times.

Schooners and sloops seen in Helsinki, Stockholm, Tallinn, and other ports of the Baltic, the Gulf of Finland and the Gulf of Bothnia included both "standing gaffers" and three-masted motor schooners with stumpy topmasts and hoisting gaffs which worked like ours on the lakes. None of the Russian schooners seen employed the standing-gaff. The standing-gaffers could set and furl and set their canvas again, in less time than the others could get theirs hoisted once. With this flexibility in power the standing-gaffers handled in confined spaces as readily as the vessels with diesel engines or other auxiliaries. Of course, there is nothing that will equal the assistance of a purring propeller in a calm and certain other emergencies, but fuel oil and gasoline cost a lot in Europe—and Stalin and Hitler have not yet succeeded in rationing the wind.

The drawbacks of the standing gaff rig are the extra tophamper and the difficulty of reefing. The gaffs can be lowered, but it is a rigger's job in a dock rather than the work of a watch on deck. They are kept aloft in all but very severe weather.

Sometimes they are held up by the ordinary throat and peak halbards, and then, of course, the sail can be lowered for reefing. But usually the gaffs are kept "standing" by short lengths of chain for the throat, and longer lengths of chain, wire, or tarred rope, for the peak. These are as stationary as permanent topping lifts. In every case the peak, or upper end of the gaff, is controlled by rigging called vangs, making up on either side of the ship. The lee one is slacked off, the weather one set up, just like a yacht's backstays.

Under weigh the standing-gaffer looks much like any other sloop or schooner with low-headed gaff sails, but a fleet at anchor is most picturesque, their long bowsprits thrust ahead like lances and their standing gaffs raking astern like rifles carried on the shoulder.

A peculiarity which all Finnish vessels and most of the Swedes' showed, in addition to this, was their gafftopsails. These all have a short club or jackyard in the head and are usually set half-flying. That is, they are furled aloft and strapped to the masthead and upper rigging, but when hoisted they are only held to the topmast by the ring or traveller to which the jackyard is shackled. They add to the amount of tophamper the standing-gaff involves by itself. The rig is best for inland waters, where sail may have to be made and reduced frequently.

At sea the standing-gaff is less suitable, although 20 years ago the writer examined the British four-masted barquentine Westfield in Barbadoes, and she had standing-gaffs on three of her masts. She was entirely square rigged on the foremast. She was a steel vessel of as much carrying capacity as the large schooners on our lakes and had been sailing the Atlantic for a long time. Some of our steamer's officers had served their apprenticeships in her years before and they said she was a handy ship at sea. Her lofty lower sails, bent to jackstays rising 60 feet from the deck, were brailed to the masts, and crane-lines crossed from one gang of rigging to the other, serving as manropes for the crew to work on if anything fouled in the brailblocks or prevented smoothness in the stow. Wonder where she is now?

SHOWING DETAILS OF A STANDING-GAFFER'S RIG—Note the head stays for the mainmast, short foreboom, loose-footed lower sails and how the topsails are left aloft. 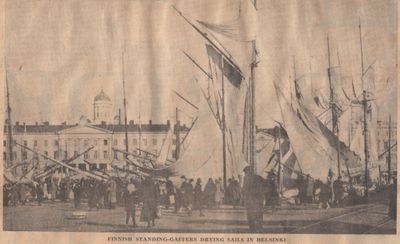