By all odds the finest card that came to Schooner Days last Christmas was that of Capt. John Williams, 57 Isleworth avenue—and this above was it.

A fine square-rigger of eighty-three years ago, by the cut of her deep topsails, reeling off the knots for home under skysails, on a long blue rolling sea. She is coming right down the wind with stu'n's'ls out on both sides, and everything drawing.

It typifies the sender. John Williams was born in Toronto on the 22nd of March, 1857. His birthday on Good Friday last launched him into his eighty-fourth year. (You can see, without straining your eyes eighty-three year-billows tumbling in the wake of the square-rigger or the card.) Though he lost his leg in his eighth decade, outcome of an injury received sixty years before yet his eye is as bright, his grip as firm, his voice as kind, as ever.

In other words, he is still going strong. He has not been sailing much since he made the historic open-boat voyage to Rochester and back with the Sea Scouts from the Beach in 1936, when he was commodore of their flotilla. But he is welcome to take the Bernice out any time he wants to. Schooner Days having invested his all in that packet (with the exception of what he could unload on others) can say no more.

Such sailors never end. They are still sailing when they drop below the horizon with a fair wind, like the square-rigger in the picture. So will it be with John Williams, some time not soon, we hope, for life tastes as good to him as he makes it taste to his friends. And that is not the time for a man to leave the table.

John Williams was born not far from where he now lives. His father was Joseph Williams, Welsh perhaps by ancestry, a Londoner who had come to this country after being to sea. With the vision of the people of How Green Was My Valley he saw, in the lake shore wilderness west of Scarboro Bluffs a hundred years ago, the possibilities of a park and the delights of Kew Gardens of the old land. When he could he bought land there, hewed a home out of the tangle, and called it Kew Beach.

He was fond of Kew. One of his sons, John's youngest grey-haired brother, bears that name. Some of the best residential real estate in Toronto is on the old Williams property.

Joseph Williams had a little schooner called the Empire. She was thirty-five feet long. She had been named the Nine Brothers in the days when Toronto's name was York. Jim Brothers was her captain and Samson Brothers was her mate. And she capsized trying to cross the lake from Niagara one St Valentine's Day long, long ago — 1841 — and drowned her crew and passengers, for she was carrying home a number of captains and mates who had laid up their vessels on the south shore at last after running most of the open winter. Schooner Days told the story once, and may tell it again, in a book. This was the St. Valentine's Day that broke Peggy Yorkshire's heart, for her lover alone of all on board was washed up at her father's doorstep on Goose Point, at Port Credit. The vessel herself was found in the ice twenty miles east of Niagara with her reefed sails frozen to the booms and her cargo of cider intact. Joseph Williams bought her, in Port Dalhousie, and renamed her the Empire.

"Young Johnny" Williams is still too young to remember anything of the Empire except what he heard, for his father sold her before he was born. His own sea-going career started at nine. In 1866 he was cook of the Rover, with his brother Tom, aged 12, as crew; brother Joe, aged 15, mate, and their father the captain. Sixty-one years later, in 1927, being past the 70-fathom mark on his life's logline, he had to retire, in accordance with the government's regulations. He had been a captain for half a century, in eight schooners and ten steamers, and had been everywhere on fresh water a freighter could float, from the head of Lake Superior to the Gulf of St. Lawrence.

There has never been a smarter man in a sailing vessel than Capt. John Williams. The writer knows well every schooner he had—the Rover, Brothers, Belle, P. E. Young, W. T. Greenwood, W. Y. Emory, Speedwell, Straubenzee. Not one of them was fast or handy, except perhaps the Belle, built in the bush at Duffin's Creek, and the Highland Beauty, hitherto unmentioned, because his brother Tom sailed her. John may have been in her occasionally. Most of his commands were as awkward as all get-out. Other men had nothing but trouble with them. Some were notoriously clumsy. But with Johnny Williams on the roof of the house they would do everything but talk. They seemed to eat out of his hand.

It was the same when he went into steam in 1904. He was master in turn of the Algonquin, Iroquois, Mathews, Osler and Hagarty up to 1914. Every one made a good profit for her owners while he was in her, and underwriters slept easy when they knew he had been signed on for the season.

Yet in an acquaintance of forty-eight years John Williams has never been heard to boast of what he could do with a vessel, in steam or sail. He has often said: "My brother Joe was the handiest man I have ever seen in a vessel; he could..." Never a vaunting word of his own prowess. The grace of humility sits like a halo on the storm-battered head of this great lake captain.

He was married in 1885. He had promised his wife, who was very dear to him, to retire as soon "as possible," for the perils of his trade weighed heavily on her. So in 1915 he had "swallowed the anchor" and moored ashore. For seven years.

They were long years for him. His wife saw that. With the self-sacrifice of all sweet women she told him she would be happy if he were happy again afloat. So in 1922 he stepped on to the bridge of the Canadian Engineer as master again in steam. In 1923 he commanded the Canadian Trader, in 1924 the Canadian Adventurer. These were all new steamers of the Canadian Mercantile Marine. In 1926 he commanded the steamer Largs, and in 1927 he took the Largs to Quebec. He also brought up the J. B. Foote twice to Port Colborne from Montreal, and once to Port Dalhousie.

But he was now past 70 and retirement was his due, whether he wanted it or not. So retire he did, and Mrs. Williams had seven years of happiness unalloyed with anxiety for her venturesome husband. He had not got to where he did without numberless close calls, narrow escapes, special providences, though he never lost a ship or a man. His whole life has been one long adventure, gay, gallant, often perilous, never tragic; not even the amputation which reduced him to "jury rig" in 1938, in his eighty-second year. Mrs. Williams died in 1934, on the fifth of May.

This bald biography is a poor acknowledgment of a handsome Christmas card, and a still poorer attempt at sending a birthday card in return. It is a still feebler effort to express appreciation of one whose career, from the deck of the humblest wood-scow to the wheel-house of the proudest lake freighter, has been a consistent building of character which makes one proud of being a fellow sailor and a fellow Canadian with John Williams.

Never a harsh word has he for the men he sailed with and against in long years of hard competition, low wages, fierce jealousies, and all the ills to which lake-faring flesh is heir. "Poor fellow—maybe he crooked the elbow a bit too much" is perhaps the hardest he has to say of anyone. Usually it is "Well, he had rather hard luck. I was in Charlotte with the So-and-so when he was there with the Such-and-such, and we flipped a coin to see which would load first at the tresle. I won, got away that day, and had a fine run up the lake. If I'd lost I'd have been a day later and maybe wound up on the beach the way he did"... and so on.

His crews in schooner days were just the usual proportion of saints and sinners, fifty-fifty of the latter, but he has something good to say of the toughest, drunkenest hellion who cheated the gallows by drowning.

"He was a terrible man to swear," it may be, "but he did know how to jibe a mainsail without tearing the whiskers out of her," or some such qualification.

He had many partners. Of the most aggravating, a man who lost four vessels of his own, and who was always in trouble, he says: "I told him when we made our deal: 'There will only be one master aboard our vessel and that will be me. You will be mate. The master gets $60 a month in these times and the mate $40. You and I will each draw $50.' The only fault I ever had to find with him was he worked too hard."

At the same time, being no mere honeysuckle, friend John has always had a shrewd appraisal of ability and of disabilities. For him to be silent when asked for an opinion of a man or a vessel was enough to make the wise put on extra insurance—if, indeed, the subject was insurable.

It is fine to be "running homeward" with so fair a wind on so clear a course. Schooner Days has been inspired by Capt. John Williams since he first heard him heaving the Straubenzee around the Waterworks dock, with the aid of her jibs, in 1892. In succeeding numbers an attempt will be made to describe the life which has settled so graciously into "that unhoped serene which men call age."

ONE GRAND OLD MASTER MARINER, Capt. John Williams, of Toronto as he faces the sun. Congratulations and many good wishes, old friend. 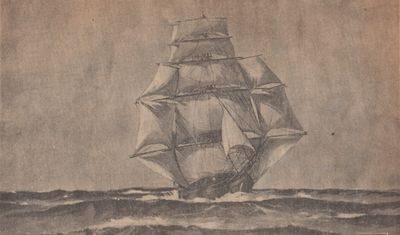