THE TWENTY-FOURTH OF MAY of 1866 was a great day for little Jack Williams.

Fenians were going to invade Canada and fight the Battle of Ridgeway within a hundred miles of his home before two weeks passed, but neither he nor anyone else in Canada knew that. No, Johnny Williams was nine, and he had got this far in school:

"The Twenty-Fourth of May

Is the Queen's birthday,

And if you don't give us a holiday

And this was the day he was allowed to leave his shoes and stockings off. And his father, late color-sergeant in the old 100th Regiment, England's garrison for Fort York, had promised him he could be one of the crew of the Brig Rover.

They lived in a wilderness of standing and fallen timber, far on the outskirts of the new city of Toronto, Queen City of the West, with its forty thousand inhabitants. Their "twenty-one acres more or less" were on the foreshore of Lake Ontario between Scarboro heights and the delta of the Don. Much of the wilderness was marsh. Much of it was sand. There was good ground for market gardens in the clearings. The trees throve or dwindled with the alternating levels of the lake water. They were poplars and softwoods, with some evergreens.

From the roof of the Williams log-built home four miles and a bit east of St. Lawrence Market, the growing city was barely visible. You might see the three-hundred-foot spire of St. James' Cathedral and the tops of the water-front elevators, dark red pagodas of the grain trade, as tiny marks under the soft blue smudge of woodsmoke from the city's chimneys.

Father and Tommy, aged eleven, drove in an old light waggon, along the long sandy track of Queen street, from their home in Kew Beach, through the city to the Dugway and down to Sunnyside, where their old friend Queen street reappeared as the Lake Shore road. And so on out past the Humber to near Two Tree Point, where nearly thirty years afterwards the Gleneiffer got ashore. Here young Jack and his big brother Joe, aged fifteen, were waiting them with a skiff. The oldest and youngest brother had rowed all the way from Kew Beach, to the foot of Scott street, and helped load the light waggon with sails and gear. Then they had rowed along Toronto's waterfront and through the old Queen's Wharf channel, and across Humber Bay. Did they have blisters?

All four of the family had started from their home at daylight. Joseph Williams, Sr., had been a sailor before he became a soldier and settler, and fitting out a newly-bought hooker was no novelty to him. Though it was a great one to his boys. At Two Tree Point a turnabout was made. The rowers drove Old Sam and the waggon on towards the Credit, and the riders took the boat along the shore for the remaining six miles or so.

The Credit mouth was a lovely haven then, as remote from Toronto as if it had been on the other side of the lake. A log blockhouse had guarded it from the time it had been an Indian post, and there was an Indian village of Mississaugas up the river. The blockhouse stood on the high bank on the east side, where the Lake Shore road crossed the water on two low wooden bridges with a marshy island for a stepping stone between. A real brigantine had been built there, the British Queen, black and red, with a royal on her foremast.

There were storehouses for grain and goods down the east side of the harbor, and piles of wood on the pier where the steamer called daily with the mail, passengers and freight. This pier ran east and west on the lake front. The lighthouse had yet to be built, but a tall pole held up a coal oil lantern.

On the west side great willows waved their silver green arms, and on the front a road christened Lake street—lost in its namesake this half-century—had two or three houses on it and ended in Goose Point, also long lost to ken of man and bird. Goose Point enclosed an inner bight or pond which yellow-webbed argosies of white and grey geese navigated. There were almost as many hotels as homes in the little port, and the five taverns specialized in goose dinners. So did the big frame Sailors' and Fishermen's Boarding House under the west bank—and so did some of the schooners; little and big, which loaded in the harbor.

Everything was very green in the Credit, this twenty-fourth of May, as the boys came in; all green and gold. The 1866 model frogs were singing amid the fresh-churned butter of the newly-minted marsh marigolds. The big cottonwood landmark on the east side of the harbor was ablaze with new tassels. The fresh leaves of the hardwoods in the remains of the primeval forest had hidden the funeral plumes of the pines, lilacs and snowballs were splashes of white and mauve above the picket fences of the gardens, and the lordly rhubarb reared his yellow-white spire over elephant ears glossy on crimson stalks. Dust trailed the light wagon to its moorings. Roosters crowed and hens clucked to their chicks, and dogs barked, and the Canada bird called "CAN-ada! CAN-ada! CAN-ada! CAN-ada! CAN-ada! " though Confederation was still a year and a month and a week to come. Spring was spring in country villages seventy-four years ago.

The most ambitious thing about the Brig Rover was her name, which was painted in bold black letters across her white stern. She was on the general lines of a shoebox, with the lower angles rounded off at either end to let her stumble over the water instead of pushing half the lake ahead of her and dragging the rest behind. Her bottom had been built upside down, on the high bank of the river near the Lake Shore road. It was planked like a sidewalk. After it was caulked and payed it was turned over, and the sides, ends and deck added. This wooden box was then pushed forward on to long skidways and launched into the creek. "BRIG ROVER" was painted on her stern because her earlier owner wished to outdo old Tom Sponton, the salt-water man who had re-rigged a sandscow with a square topsail and registered her as the BARQUE SWALLOW.

Barques and brigs were square rigged on two masts. The Swallow was not a barque and the Rover was not a brig. Their only approach to square rig was the one square topsail each had. The Rover's was very sketchy indeed, being merely a square of canvas laced to two poles, and set flying from the deck.

It was Moses Niblock who built the Rover, for Robert Lynn, who sold her to Tom Smidley and Johnny Grantfield of Toronto. It was Grantfield who had evolved the pikepole topsail. He was the "local inventor" of Port Credit; one of his later devices was a contrivance for scooping up coal spilled at wharf edges. Much coal was lost thus in the old horse-and-bucket system of unloading. Smidley was a dapper militiaman, and distinguished himself soon after this with the Tenth Royals in the Fenian Raid. Yet soldiering and inventing had not made the Rover either larger or more prosperous, and she had passed into the hands of Joseph Williams, Sr., for the sum of $75 in the new money which had succeeded the old Halifax currency.

But to young John, with the imagination of nine, she was a Queen Elizabeth. She had a little square house at the stem for a cabin, with two windows and one door. You went down three steps and were on a square floor with a stove in front of you and a standing table. On either side this floor extended under the deck to the Rover's flat sides, making four shallow bunks. Behind—beg pardon, abaft—the floor ran to the rudderpost and provided room for lockers. Forward of the cabin bulkhead the hold ran clear to the bow, without other obstruction than the centreboard box in the middle and the shores which supported the deckbeams in the wake of the hatches.

She had two big square open hatches, and two masts, each with its topmast and gaff and boom. Her complete suit of sails would be seven pieces. She was fifty feet long and could carry perhaps forty tons of deadweight, or a little more than one railway flatcar.

"My, father," said Johnny, as he strutted her littered deck, ignoring alike splinters in his bare feet and the water he could see in her hold, "she's a big one! She's certainly a big one!"

He felt big, too, striding the deck of a lake leviathan whereof he was crew. But he discovered that nautical duties were of wide range.

"Get yourself a bite to eat from the basket, you and Joe, " said his father briskly, "then Joe'll help Tom and me finish fitting her out, and you'll start back with the horse. "

Johnny had not expected promotion to captaincy of a light waggon on the first day of his lake-faring, but he had already had the voyage half way or more to Port Credit in the rowboat, and anyway, orders were orders.

So with the May sun past the zenith but still high and warm on his back, he made sail back for Kew Beach, the old horse plock-plock-plocking along the drying road.

The sun was getting low when he reached Sunnyside on the way home, and he saw a stranger waiting for a lift. Having been warned of the perils of the road he spurred up old Sam with his long gad, but the Dugway Hill, which wandered down through South Parkdale, was too steep and sandy to be taken at a gallop, and the stranger boarded this tender of the Rover without opposition. He was a harmless chap enough, and sat on the tailboard saying never a word.

Johnny drove on and on, and somewhere his passenger disappeared. It was getting dark at night now, and the child had been up since dark of the morning, and had had a very full day. He must have nodded. For the next thing he knew it was pitch black, and his mother was getting him down off the seat, and old Sam was snorting at their own gate, for he wanted his supper and stall.

Such was Capt. John Williams, master mariner's, initiation into seagoing, of which much more later. As old saltwater logs say:

Capt. Williams is very much alive. He lives here in Toronto within a hundred yards of the old homestead. His adventures in seventy years of lake faring will appear in succeeding numbers of Schooner Days.

CAPT. JOHN WILLIAMS' LARGEST COMMAND, THE 12,000-TON STEAMER "J. H. G. HAGARTY"; and astern of her, in accurate proportion, is the little pikepole topsail and all, in which, as a child of nine, he began his long running jump to the bridge of one of the largest Canadian freighters of her time. 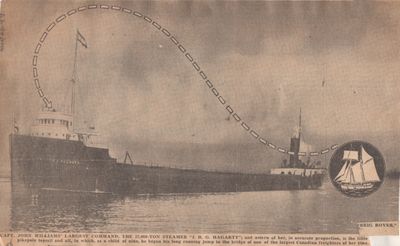