ONCE there was a boy who "dreamed a dream" as he sailed over tropical seas as A. B. He was then a sailor before the mast in the barque Surprise and schooner Edward Blake. The dream was that some day he would come back to those seas as master of his own ship and sail for pleasure where he was working for pay.

This week that boy, long a "hard-driving skipper and a darn good story-teller," told the Shellback Club at its weekly luncheon how he had made his dream come true. The quotation which describes him is from the introductory speech of "Bill" Hearst as he presented Commodore Aemilius Jarvis to the club-members to tell his story of the cruise of his schooner-yacht, Haswell, from Toronto to the West Indies and back in 1920 and 1921.

In seven months and 27 days Commodore Jarvis sailed his yacht 5,503 sea-miles, ran through storms and rode out a hurricane, logged 253 miles one 24 hours, showed a troublesome crew that he was master of his own ship, and laid up a store of anecdotes which yesterday, nearly 20 years later, brought laughter and applause with equal heartiness from his listeners. The story seemed to rate a place in Schooner Days, even at the cost of having to postpone the second instalment of the life of that other master mariner, Capt. John Williams, which we have begun. So here it is:

Although he had been racing and sailing on fresh water for almost fifty years when he started for Jamaica in the 20-ton Haswell, Commodore Jarvis knew what to expect on the ocean, for he had made voyages in schooners and square riggers to London, Leghorn and Brazil. He fitted the Haswell properly for the occasion, with a mainsail cut down from her proper size to the extent of a single-reef, a heavy foresail, cut from a larger sail, and a spitfire jib, hoisting six feet clear of the bowsprit end and capable of being triced up out of the way. He knew what it meant to poke a jib into a green sea and burst it with a ton of salt water. He also rigged a gallows-frame, or permanent trestle, at the stern, for the main boom to be crotched in, and stout double downhauls for throat and peak, so that the gaffs could not flail about. He kept all his gear small, so that it would render easily, but strong because it was new and good quality. The only thing he parted in his five-thousand-odd miles of voyaging was the wire sheet for his small working topsail. It chafed through.

Laughter started as he warned those who would go cruising that "the whole pleasure of a long cruise can be made or marred by one man— the cook. Get a man who can cook plain meals and serve them on time, and one who won't get sea-sick," he advised.

Such a man was Len Ellerby—still in the yacht fleet with Commodore Jas. E. Hahn—in his crew as they started from Toronto in September of 1920. Other members of the small ship's company were the mate, two men forward and the commodore's son, Sam.

The paid seamen "tried me out from the start," Commodore Jarvis recalled. "Having been at sea as a boy, I knew what was what, but they didn't know that I did." However, when he and the cook got "ready to chuck them off," the hirelings learned their lesson. On one occasion, in the Hudson River, Commodore Jarvis rounded the Haswell to and dropped his boat over the side and gave a sulky seaman the choice of being landed instantly to walk to New York, or going on with the work of "rattling down" which they had begun. The skulker eyed the commodore's fist and went back to his job.

"Rattling down" consists of seizing ratlines across the shrouds to form steps for going aloft. Mr. Jarvis had already done twice as much of this, in the same time, as the man working opposite him—for wages—when the latter got the erroneous idea that he could take the rest of the day off.

OFF TO QUIET START

There was little other excitement as the Haswell sailed from Toronto to Oswego, down the canal to Albany, where she was refitted, and down the Hudson, for five days, to New York.

That was the prelude. Then came the days of open water, with the arrival in Simonstown to find two four-masted schooners which had waited for two months for a fair wind, and which set sail the next day when they saw the example set them by the little 60-foot schooner-yacht; a call at Jacksonville, where the cook was taken ill and had to be replaced "with a man from a circus"; thence to Nassau, where the circus cook, who had "gone to bed as soon as we left Jacksonville and had not been seen by us again," was replaced by a negro cook who "could burn water as well as the rest of them but didn't get sea-sick."

DANGER OF THE REEFS

With Nassau behind him, Commodore Jarvis met what he admitted was "a little danger. " He told of beating out, against a very heavy wind, to Exuma Sound and sailing over the Bahama Banks to Ship Island Passage. Water on the banks is shallow, sometimes three fathoms and never more than five. "And," said the commodore, "every 200 yards or so you see a brown spot, sign where coral insects are building up their cones. " With a man conning the yacht from high in the forespread as the Haswell picked her way though then beat out through the dangerous, eighth-of-a-mile-wide Sea Island Passage against a wind which "was too much altogether" and a heavy sea.

A course was set for the southern end of Cat Island, 80 miles off, after open water was reached and some of the canvas taken off the yacht.

A terrific current swept them 20 miles to leeward, and Commodore Jarvis, snatching a little sleep, awoke to hear his mate shout "breakers ahead, ease your jib, hard a-lee!" She wouldn't stay, so they jibed around to safety, and to find that their drift had fetched them to Long Island and they had to beat for 16 miles during which time the Haswell "was fighting for her life in a vicious sea with the wind blowing very, very hard." The seas seemed fifty feet high. Sam, kept below for hours, came up for one look and not being able to see the top of a sea-mountain, ducked below again.

Then, with quieter sailing, a little more trouble with a member of the crew, whose epithets could be only answered in one way. "I kept one leg of a stool for handling language like that," reminiscenced Commodore Jarvis. "I took one ear almost off him and he was quiet from then on." In a quiet voice which was drowned in a roar of laughter, "at Jamaica we had to send him to hospital—and we left him there."

Next was a call at Santiago, where there are "all the darned rascals there ever were." For a cake not worth $2, twelve dollars was asked. A demand for $78 to fill the Haswell's tanks with drinking water met the commodore's reply "no thank you, we'll fill her up with beer."

Discovery of a spring of clear water and a little hard work, however, cancelled the need for beer and filled the tanks for nothing. On to Jamaica, where Culrose MacLaughlin, "the best man I ever had, " replaced the mutinous member of the crew, and "Mac" joined to stay with the commodore for many years. At Clarencetown, on the Grand Cayman, a parrot was added to the crew-list, brought in by Mac's father for "the skipper."

Two weeks in Havana and three weeks in Miami and then, on March 31, sail was set for home.

SNOWED IN AT SEA

After taking the inside passage and avoiding Cape Hatteras, they met their hurricane. They had left Norfolk in summer weather. The next day they were hove-to, with 12 inches of snow on the deck—and that was all that was on the deck. All hands were below, with the little schooner under close-reefed foresail and lashed helm, riding it put for 36 hours.

A changing wind proved fair, and after the hurricane there were two days of clear sailing, with safe arrival in New York. Toronto was reached again on May 19, 1921.

As long as she remained on the lakes the Haswell proudly wore a shark's-tail on her bowsprit end, commemorating her southern cruise. Mr. Jarvis would have preferred the tail of the barracuda which snapped off his towing-log somewhere on the coast of Florida, necessitating his difficult call at Cat Island.

The Haswell was 60 feet on deck, 14 feet beam, 8 feet 6 inches draught, built of mahogany on steel alloy frames, a perfect Herreshoff cruiser, light, strong and fast. Mr. Jarvis never pumped her while he had her. In 1923 he sold her to a Mr. Peddar on the Pacific Coast, who renamed her Diablo. She twice won the ocean race from Santa Barbara, Cal., across the Pacific to Honolulu.

So ended the saga of the boy who had dreamed a dream—and made it come true.

Thanks were given for the Shellbacks by Charles Turner, who declared that in his sailing with Commodore Jarvis he had never been knocked flat by a stool-leg "but he taught me seamanship and increased my vocabulary." Thanks were seconded by all of the hundred and twenty present with loud applause. It was a record attendance of shellbacks. John Hobbs presided.

Commodore Jarvis will be eighty this month.

Next week Schooner Days will continue the adventures of Capt. John Williams in the Brig Rover.

COMMODORE JARVIS at the wheel of the Haswell—a snapshot when his eye was aloft on the nighthawk.

Dismantled to Go Under the Bridges of the Oswego Canal 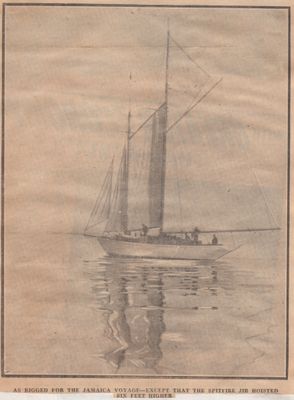