"We hove our ship to

In a gale from the north east, boys,

We hove our ship to

Our soundings to clear"—

(With acknowledgments to Spanish Ladies.)

WHAT a golden glow a first love sheds for life!

It is seventy-four years since nine-year-old Johnny Williams strode the fifteen by fifty foot deck of the scow Rover, just purchased, and said "My, father, she's a big one! She's certainly a big one!" And though he has since commanded five hundred and fifty footers, that could swallow three hundred Rovers without bulging their steel stomachs, he still feels a prideful admiration for that little woodbox.

There may have been more awkward unhandy omadhauns than the Rover, but they were not among the dozen hookers the compiler of these chronicles has pumped Lake Ontario through, as owner, sailor or passenger. But Capt. John Williams is still kind to her faults and tolerant of her failings. "She didn't do very much in rough water, with the wind ahead," he admits, "but I could steer her, though her big wooden tiller was almost as high as I was at nine."

Joseph Williams, Sr., took a pride in her, too. He sailed her with his three sons at first. Joseph, Jr., fifteen, was a "natural born sailor" and soon commanded the Rover, with Tommy, three years younger, for mate, and Jack for cabin boy, cook and crew. Later on Joe, the eldest brother, used to put Johnny in charge when he left the vessel. Johnny and Tommy always pulled together well, and each commanded his own craft ere many years passed.

Living quarters in the Rover were more comfortable the second season, when Williams pere removed the little box of a trunk cabin and built one right across the stern, from rail to rail, with the entrance from the forward end. Some large vessels on the lakes were so laid out and the plan is still in use on some of the surviving sailors on salt water. Anciently such a cabin was called a roundhouse, because it was in the round of the stern. It gives a maximum of accommodation for the space used—but if the vessel fills her deck with water, look out below! It washes back and bursts against the break or bulkhead like billows on a cliff. The Nancy had such a cabin for the War of 1812. You can see it in her big model in the Royal Ontario Museum.

Perhaps the Rover's name gave her nine-year-old cabin boy the urge to roam. At any rate, without losing his admiration for her or fretting under the family arrangement, he struck out for himself the first chance he got. In the fall of 1868, when he was twelve, he was shipped by two Manx brothers, Tom and Dick Curphy, in a little hooker named the Mary Ellis.

The Mary Ellis became one of the antiques of the Toronto waterfront. She was fifty-five years old when she was blown up at the Toronto Exhibition fireworks of 1898, a representation of the destruction of the U. S. S. Maine. Three other worn-out schooners had a similar fate that year.

But when Johnny Williams "signed on" at Tom Heaslip's hotel on the Esplanade at the foot of Scott street, the Mary Ellis was sound as the wheat. Muir Brothers drydock at Port Dalhousie had not long before made a thorough job of her overhaul. The Manxmen had taken her over to Alexander the Great, master builder and head of the shipyard firm, and told him they had no money but the vessel needed repairs, and they would like to leave her on his hands until they could earn enough sailing before the mast or as mates in big schooners, to pay for the work.

Alexander was rightly named the Great. Great of heart and great of hand. He said he would do what he could. The yard was not busy that summer. They had finished the Asia and not yet begun the Albatross. So the Curphys shipped in various vessels and came back with their season's savings—perhaps $100 between them —to find a transformed Mary Ellis. She had been a standing-keeler. Now she had a centreboard box on one side of the keelson. That was what she wanted most of all. But Alexander had taken out every rotted plank and timber, given her new bulwarks, new decks, quarterdeck and cabin, and in fact made a new ship of her. His bill was $400.

The Curphys were aghast. "We haven't that much; it would take us four years to save that much," they wailed.

"Take her, lads, and make her pay for herself," said close-fisted Alexander.

They could hardly believe their ears, but he meant it. Alex Muir knew men.

So the Curphys in the course of time shipped Johnny Williams as cookboy, and loaded lumber in the old Northern docks for Oswego; though it was November, and Oswego a hundred and thirty-five miles away, and a long hard voyage for vessels of six times the Mary Ellis' tonnage.

She was about the size of the Rover, and being sharp and schooner-built instead of square, was probably not as good a carrier. Twenty thousand feet board measure of pine was all they got into her, and that piled the deckload up above her bulwarks, which were high for a vessel of her size. The rail was just so high that Johnny, sitting on her deck, could look over it, resting his chin on his elbows.

They got well down towards Oswego when it came on to blow from the northeast; and it snowed. Thick. No land, no lake, no sky. Just feathers, feathers, feathers of the Canada goose, falling into the grey water alongside and vanishing without making even a tiny bubble — "ae moment white, then melts forever."

A snowstorm afloat is awe inspiring. Everything is hushed with the mystery. For all the snow seems to fall on the vessel. It tricks the mind by its disappearance in the water.

Without a word the Curphys lowered and stowed the outer jibs and the foresail, lowered the mainsail and close reefed it, and hove the wee ship to, heading northward, with the wind on the starboard bow, the staysail, hauled out to weather, keeping her off against the urge of the mainsail, which wanted to bring her up. She was edging offshore, with all the width of the lake before her.

It blew harder, and the sea ran hissing against the snow and splashed aboard and formed icicles on the ends of the planks of the deckload, and then a glaze, and then a mass of solid ice and frozen snow.

There was nothing to do. It seemed useless to keep a lookout for they could not see the length of the vessel through the snow, and could not do anything if they could see. Yet they were in the midst of an unseen fleet. They could only hope they would not be run down. The tiller was lashed to keep her from broaching to. With the rising sea she jumped livelier and livelier, but she was making good weather of it.

All hands—the three of them or six, if you are mathematically accurate—went below and stayed there. The Curphys braced themselves against the roll and jerk of the ship, one on each side of the cabin table, backs against the lockers. Johnny kept the stove going and boiled the kettle and got something to eat. After he washed up he curled down on his elbows in his little bunk, which ran across the after end of the cabin. He watched the faces of these silent Manxmen for sign of his fate. Their faces showed nothing. Dick Curphy smoked pipe after pipe of the strongest tobacco that ever wrestled an Ontario gale. Tom produced his fiddle and scraped tune after tune out of it through the blue haze that choked the cabin lamp.

Between pipes Dick groped for his ancient accordion, and occasionally added his music to that of the gale outside. Sometimes, but very rarely, a brother spoke.

"She'd go to South America in this," observed Dick once.

It seemed many days later when Dick Curphy knocked the ashes out of his pipe and said: "Us ought to be mighty well down there, now-abouts. " Tom interrupted his sawing to say "Yus" and resumed. Dick crawled across the squirming cabin floor to the companionway. A gust of wind swept down the open hatch, but no snow.

"Come up and make sail, " called he, and both below turned out.

It was growing light. In fact it was to-morrow. The day when they went below had become yesterday. The wind was not so wild, though the sea was still running high. The deckload was frozen in a solid mass, buried under a foot of snow and ice. Snow filled the belly of the reefed mainsail and the staysail and buried all the other sails. Dick broomed the foresail off, pounded the halliards clear, and they tried to hoist; but they couldn't get her going until Johnny emptied the boiling teakettle on the fore throat halliard block.

By the time the foresail was mastheaded they could see another vessel. As they both went smoking away to the southward, sail after sail showed up against the sunrise. Probably a dozen schooners had been dodging across the lake off Oswego at the same time, hidden from one another in the snow. Oswego was still invisible, but Dick Curphy steered for it seemingly with the instinct of a gull or a lake trout, and when the lighthouse did show up it was on the Mary Ellis' jibboom end. An hour later the dozen vessels were popping into the harbor as fast as the tugs could pick them up. Little fellows like the Mary Ellis sailed in, of course. They needed no tug.

A fine time they had prying that deckload loose and piling it out on the snow-mantled Oswego wharf. After they collected the thirty or forty dollars freight on the cargo they loaded salt for Toronto, a hard cargo at any time, but especially in the fall. Salt is heavy and waterlogs.

"No chance of you ever getting up with that load," the skipper of a big three-master told them.

"When you fellows get to Toronto us fellows won't be far behind," Dick Curphy replied.

It was a grand Ontario tour for Johnny, the trip back. The Mary Ellis fought her way from port to port along the south shore, making daylight runs and dashes, often having to put back, but staggering out again. They saw Little Sodus and Big Sodus, inside and out; Pultneyville, and perhaps Bear Creek, that little hole in the bank near Fairhaven; the Genesee, and the lee under Braddocks, Oak Orchard, Olcott and Niagara and Port Dalhousie, too, before the salt came home.

But that was better than the big fellows did. They struck for the north shore mostly, and went in under South Bay Point, tried again, and had to run back to Kingston, and froze in there. Some lay under South Bay Point so long they ran out of provisions and sent their boats ashore to bargain with farmers for food. Cattle were driven down and slaughtered on the beach at $40 a head, the farmers keeping the smoking hides, horns and tails. Others trying the south shore had to winter in Port Dalhousie.

The Mary Ellis was nearly a month on her round trip, but the Curphys were able to mail Muir Brothers a substantial Christmas box on account of their bill.

BREASTING THE GALE—An old-time laker, larger than the MARY ELLIS, hove-to under close-reefed foresail. This picture was by one of Capt. Williams' contemporaries in lake sailing, Joseph F. McGinnis, last hailing from Brooklyn, N. Y. 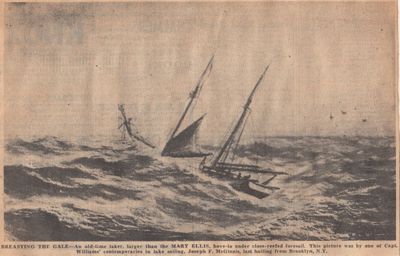