THE WILLIAMSES, father and the boys, most emphatically including Johnny, the eighty-three-year-old hero of our tale, did so well with the little Rover, that at the end of the season of 1869 she had cleared $400, which was more than five times her cost.

As said before, ex-Color Sergeant Joseph Williams' heart was in the development of the Kew Beach property he had pioneered far east of the growing city. The Rover had been a means to that end. She marketed the cordwood he cut in clearing the place. So much did he think of "The Kew," as they called his holdings, after Kew Gardens beyond his native London, that he bought more land, paying eight per cent, on the mortgage, while he developed it. From 1870 onwards he devoted his whole time to clearing, fencing, building and cultivating market gardens in the virgin forest soil. He hoped to make a popular amusement park of the Kew. He sold the Rover. The three boys, who had been sailing in her for four seasons, sometimes with their father, sometimes alone together, found themselves in a new ship.

This was the Brothers of Bronte. She could not have been more appropriately named, for she was built for two brothers, Captains Hank and Joe Henderson, and now she was to be sailed by three brothers.

She was as homely as the Rover, and the Rover has already been accurately compared to a shoebox with the lower corners rounded off. But the Brothers, in spite of her looks, was a good specimen of the schooner scow of the lakes. Up to the day when, old, bent and naked, she was blown up to represent the U. S. S. Maine at the Exhibition fireworks of 1898, she held the reputation of being "a clinker to sail." In fact while her rags of canvas could be kept in the boltropes no stonehooker in the fleet except the ex-yacht White Wings could pass her.

She had been excellently built, when first class timber was still such an encumbrance to the soil that it was frequently burned in heaps and its ashes used for potash and pearlash.

Not a plank in the Brothers was less than sixty feet long. That was the length of her chine, or bilge; corner, to the landlubber, where the side met the bottom. Above the chine the planks were longer and longer, all running her whole length and giving her the desired overhang forward and aft. They were clear white pine, from three to five inches in thickness and twelve inches in width. The upper edge of each had more curve than the upper edge of the plank below it, building up a graceful rise or sheer at each end.

In the course of time the Brothers lost much of this original construction, where pieces of plank had to be cut out and replaced, and blind-frames had to be driven to land the butts or spike to. But when little Johnny Williams, aged thirteen, first saw her, she was a fine sample of pioneer woodwork. Strongly built she was, but not too heavily, for heavy construction means that a vessel is all the time carrying a cargo of wood on which no freight is ever paid.

So the boys got the Brothers to sail, young Joe, nineteen that February. as captain, Tommy, fifteen, and Johnny, now thirteen, as crew. Cooking was now done turn about. Though Johnny was the youngest, Captain Joe gave him charge when he had to leave the vessel, as he had done when the three of them were children in the Rover; Johnny had a nimble mind for management, and Tommy, although older, "pulled well" with him, and respected his judgment.

The Brothers didn't become theirs without ceremonial rites befitting an investment of considerable magnitude. Her price was a man's whole earnings for a year in 1870, when, as that haunting chanty, "Lowlands," says:

"A dollar a day

There were first the preliminaries between Williams senior and the Hendersons. These included a voyage in the nature of a tryout, in which the Williamses sailed the Brothers up to Bronte with a lading for a general store, because she was a package freighter of the time, and no mere stonehooker. The owner or agent or a clerk accompanied the goods. It was a slow, lightweather passage, and night fell when they were only half-way to Bronte, slowly groping their way along the invisible shore.

Ontario's shore is a torchlight procession now, all night long, of motor cars with blazing headlights, illuminated signs in all colors, white and amber overhead highway lamps, red and green stop-and-goes, and a million candle-powers in house, store and town illuminations. In 1870 the first light west of the red lantern on the Queen's Wharf, Toronto, was the lantern on a pole at Port Credit — if a steamboat was expected. Next was the sulky dim lighthouse at Oakville. Bronte had none. The only other lights were the occasional stable lantern or coal oil lamp in the farmhouses, few and far between, and blown out by nine o'clock when the farmers went to bed.

Floating along in the silent dark, young Joe, captain-elect, showed his knowledge of local pilotage by calling off accurately the position of the Brothers when nothing could be seen but the black shore.

Or, "We're above the Credit, though the light don't show, but you can hear the ganders calling in the pond behind Goose Point. "

And he was right. Young Joe was a born topographer, and he knew every dog and fowl, point, bar, headland and tree between Liverpool Market and Wellington Square, where the Rover had ranged.

He knew the bottom, too, and could tell where he was by the feel or smell of the lead, as it brought up sand or shells or mud or gravel. This night sounds travelled far over the quiet water and to Young Joe they described the shore like a travel folder.

"Must have a new calf at Marigold's," opined Joe when they were abreast of Marigold's Point and the bleating of baby beef could be heard. But he confessed he could not account for the gobble-gobble of a turkey cock, for he was sure Marigolds hadn't any.

"Well, what do you make of that? " demanded his father when the loud crow of chanticleer sounded overhead.

"Beats me," Joe admitted. "It was as plain as though the bird was in our crosstrees, and yet we're a mile off the shore."

As he spoke they heard the rumble of a train.

"I don't believe you know where we are, Joe, " said his father, "for by the sound of that we might be in the Great Western freight yards.

Joe was indeed puzzled, but hazarded the guess that it would rain before long, with sounds carrying so far and so hollowly.

"Maybe, " said his father. "Sounds to me as though we were in for a wet spell of some kind." For as he spoke an infant began to wail.

"Father! " shouted Tommy, "some body's hidden a baby in the hold!"

"Let's hop down the forward hatch and overhaul those crates," said Joe, "it sounds as though it was among them!"

Down they went with a lantern, but before they had moved a box they heard the child crying plainly in the cabin, so they came up and went aft and looked there. But another baby began to cry in the forepeak, and the youngsters ran there. The Brothers had no forecastle, but was bulkheaded off forward, in the vicinity of the fore chains, and this space provided storage for tools and gear and supplies.

No child could the boys find, and the ship seemed possessed. When babies were not crying, cats mewed and dogs barked and horses neighed and hens cackled. The young mariners poled the Brothers up the basin of the Twelve Mile Creek which formed Bronte in the grey of the dawn, bewildered, baffled and distressed.

"Mr. So-and-So," said Joseph Williams, senior, to the passenger or supercargo, as that worthy stiffly prepared to get ashore after his night in the lake, "that was the best ventriloquist's turn of yours I've heard since I was at Vauxhall, years ago. When I get the Kew into shape as an amusement park I'd like to engage you as one of the attractions."

Little Johnny Williams missed the fun of the ventriloquist who peopled the nightly deck of the Brothers with a barnyard and a nursery, with a phantom train for luck, for he was not on this preliminary voyage. But Joseph Williams, senior, was so pleased with the ship and the time they had carrying the passenger with the drygoods and groceries to Bronte that he decided to buy her. They wanted $500 for her. It was a lot of money, but she was worth it. Not to seem too eager about it he made some non-committal remarks to the Henderson brothers who had named her, and said he would be going home as soon as the cargo was unloaded. And home he went, taking his boys with him.

On the 3rd of June, 1870, young Joseph and his brethren appeared in Bronte with a fat roll of bills in his pocket.

"Father said I might have a chance to buy the Brothers, Captain," said he to Hank Henderson, producing the roll, "but all I have is $400."

Hank looked at the lush green pile of bills in the brown young fist. "Take her, boy," said he, "take her away now, and never let anything on the lake pass her."

So away sailed the young adventurers of 1870.

LOADING ON THE SHORE, from "Upper Canada Sketches. "—Little vessels like the JENNY JONES and the BROTHERS, ROVER and the MARY ELLIS, and schooners of six times their tonnage, often loaded and discharged their cargoes on the beach of the farm where the freight originated or was bound. Lumber is being rafted out to the small schooners shown here, loading near Oshawa.

MARINERS' SERVICE? THIS IS ITS BACKGROUND—So many Telegram readers have asked about the setting for the Annual Cherry Valley Mariners Service, and Schooner Days is fortunate, through the courtesy of the Picton Gazette, to be able to present this piquant picture of the pulpit as draped and decorated for service last Sunday in Prince Edward County. Throughout proceedings the central lighthouse flashed its three-second message, and put out starboard running lights and the steadfast binnacle lamp gleamed, and silently confirming the traditional call of the lookout, "The lights are burning brightly and all's well." 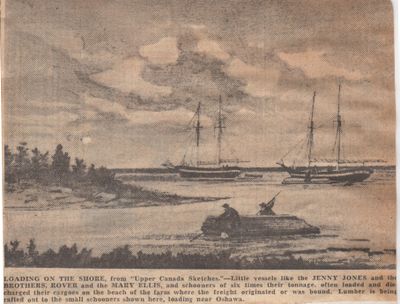