Publication
Toronto Telegram (Toronto, ON), 4 May 1940

There was not a butt or scarf or joint to be seen in either side of her. The planks were all edge-bolted together, so that the whole side was almost independent of the usual forest of close-spaced oak ribs. In the Brothers the ribs, or frames, were four or five feet apart, and served only to mould the shape of the vessel. The bottom was like the Rover's, planked square across.

"Joe, " said he to his nineteen-year-old brother, who held the rank of captain, "this vessel may be all very well, but you can see twelve miles up the lake through her starboard side. If you don't believe me, look for yourself."

Good-natured Joe accompanied him to the forepeak, bulkheaded off from the cargo hold. Johnny pointed to the sheerstrake near the forward chainplates. Sure enough, daylight did show in the darkened forepeak, and by putting the eye to the chink you could see clear to the horizon.

"You stay here, Johnny, " said the unperturbed Joe, "till Tommy and I put her around, and then tell me what you see."

There was the clump and flog of blocks and loosened sheets overhead as brother Tommy put the tiller down and brother Joe let the jibsheets fly, a scuffling of water around the square bows as the schooner pranced up into the eye of the wind, deepening silence as she slowly filled on the other tack, and then a resumption of the merry rap-rap-rap and splash-splash-splash of crunched whitecaps as she gathered way and romped off.

"Now, what do you see? " called down Joe through the little forward hatch.

"Nothing to starboard at all, but I can see land to port."

"That's as it should be, " said Joe. "Come on up and I'll tell you something. This vessel's light like a basket and strong like a basket. That's what makes her sail fast and be a good carrier. If your basket is heavy when it's empty you won't put a full load in it if you've got to carry it. Same with the Brothers. She's light, so she will take a big load. Because she's light she works a little, like a basket. The weather side gives a little, and you see daylight. But the lee side closes up tight as a drum, between the pressures of the wind and the water. When we come about, the other side tightens up. So don't you worry about what you can see through her weather side, for that's the one highest out of the water. She'll stay tight enough below."

That was one thing against the scow model, then extensively used on the lakes. Scows, being square of shape, "worked," unless built so heavily they could scarcely sail. They also pounded in a head sea. The scow model was easier to build from, and hundreds of scow schooners and a few "brigs" and barques" were built. Most were small, but some ran up to four or five hundred tons capacity. The late Dave Reynolds was in one. She sailed well, but on the wind her weather coveringboard would open up so much the crew would shove shingles down the crack till the thick ends were flush with the deck. She could carry 440,000 feet of lumber, an enormous load.

Joe was just nineteen, but he had been skipper of the Rover for four years, whenever Williams senior was not aboard. To this day the eighty-three-year-old Johnny declares Joe was "the best man with a vessel" he ever encountered. He knew what he was talking about. The Brothers was baskety. So much so that when she was dismantled at the end of her days, twenty-eight years after the June morning in 1870 when this little lesson was given, the whole bow fell out of her with the weight of the bowsprit, when the forestay holding it up was unbent. But the three boys had a good time in her, and spent little of it at the pumps.

There was the great race they sailed against the John Pugsley, just brought down from Port Dover, the crack scow of Lake Erie, later rebuilt by Capt. John Goldring, and given schooner ends, and renamed the Helen. The boys hooked up with her some place off the Highlands, when they were working up the lake with a load of stone they had bought from the farmers in Frenchman's Bay. The Pugsley, newly arrived on Lake Ontario, had finished loading gravel on the beach below Scarboro Heights. The two vessels were about of a size, the Pugsley slightly larger. They fought it out, tack for tack, all the way up the lake. It smoked up for a squall and Capt. Goldring clewed up his gafftopsails. Young Captain Joe hung on to everything, with brother Jack standing by the fore gafftopsail halliard and clewline, and brother Tom standing by the main, and the extra man—they were four in the Brothers this trip—ready on the jibtopsail downhaul. Captain Joe hove in stays at just the right moment to round the outer stake of the new Eastern Gap, after which the Brothers could ease sheets for a fast run into Toronto Harbor.

The Pugsley held on, and overstood, and her apparent lead was all wasted when she came around for the entrance. All the way across the Bay she boiled hard in the Brothers's wake, but the Williams boys were first into George street slip, and had their lines out in the coveted position on Taylor's wharf before the Pugsley moored astern of them. Charlie Goldring, who kept the hotel on the other side of the Esplanade at the corner of George street, came running across with a pair of plush-mounted antlers in his arms. They were a well-known beacon of the old Toronto waterfront, for they decorated his bar.

"Take the horns, boys, take the horns, for you've won 'em and beat the Pugsley fair and square," cried he. "Old Lake Ontario forever, against Erie, Huron, Michigan, Superior, or the Lake of the Woods."

The boys took the horns. They mounted them at the foretopmast head of the Brothers. Old Capt. Henderson, selling them the Brothers, had said, "Take her, and don't let anything on the lake pass her." The Brothers never lowered her antlers or her colors, for anything of her size.

And she had a fine set of colors, too, a long swallow-tailed burgee with her name in red, white and blue, and a red ensign with the new patch-work-quilt arms of the three-year-old Dominion in the fly, and a blue flag with a white arm grasping an arrow. It was a design which had caught the fancy of Joseph Williams, senior, years before, when saw it at the mastheads of the ships bringing supplies to the firm of chemists to which he was apprenticed—before he came out as color sergeant in the 100th regiment, or was a lake sailor, or saw his great vision of Kew Beach, Toronto, vieing with Kew Gardens, London.

Every time the boys sailed the Brothers past the log house in the clearing east of Ashbridges Bay, which at this time represented the progress that father had made towards his vision of Kew, up would go her colors, and on a pole among the pinetrees before the log house would rise the answering signal. Sometimes the three youngsters would be away from home for weeks, with no other "letters" than these flaming flags.

Captain Joe kept those antlers until his brother, Captain Johnny, laid him in the grave in Norway cemetery, five years ago. 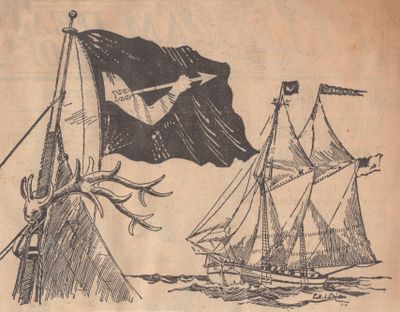