ANOTHER highlight of little Johnny Williams' experience in the family schooner Brothers was when they loaded lumber, doors, window frames, sash, shutters and so forth for Niagara, late one fall. It was so late that Edgar Jarvis, brother of Mr. Jarvis, the sheriff, for whom the cargo was intended, became anxious about its insurance. Rates were prohibitive.

"Don't worry, " said elder brother Joe, the captain of the craft, "the vessel isn't insured either, and I don't intend to lose her. If I don't lose her I won't lose your lumber."

Mr, Jarvis waved an anxious farewell to his consignment as the Brothers, laden deep and with her decks full of the lighter articles, swam out for Niagara at 12 o'clock noon with only three boys on board. But they were Williams' boys. He might have breathed freely.

The wind was moderate to fresh from the northwest, and young Captain Joe kept his gafftopsails and maintopmast staysail and jibtopsail in their gaskets. Nevertheless, under the four lowers, the Brothers crossed the lake in steamboat time. By 3 p. m. she was moored at Niagara-on-the-Lake. There was so little of her above water, because of her big load, that three miles out, when she was going over the Niagara Bar, she would dip her jibboom end into one roller, and the one chasing her would come up to the level of her taffrail; but she never shipped a drop.

Unloading with teams hauling the lumber to its destination, the site of a house Mr. Jarvis was building a mile or so up the shore, was a slow process, and one that earned the three boys nothing but the freight that would be paid when the last board was delivered.

The resourceful Captain Joe had a better plan. Unloading the doors and worked lumber into the wagons, he threw off his mooring lines and dropped out with the current and sailed the Brothers up the shore to a point abreast of where the house was being built.

Even when loaded the Brothers did not draw much over four feet, so he stood close in until she was scraping the bottom, and got a kedge out while the water was smooth, to heave her off when it should become necessary.

The wind was offshore, ideal for anchoring close in. In getting the kedge anchor out, Johnny and Tommy used the punt. It was easy, because the wind wafted them out into deep water, and all they had to do was to pay out the coil of line, one end of which was on the Brothers' windlass and the other on the kedge in their boat.

When they came to the end they dumped the kedge over the stern — and then discovered that they were in an empty punt, with no oars, their only means of contact with the Brothers, the kedge and its line, now on the bottom in two or three fathoms of water, and all Lake Ontario before them. The offshore wind would not let them stop before reaching Toronto. To drift across Ontario in a December breeze is more than tempting Providence. It is attempting suicide.

Brother Joe to the rescue! He always kept the Brothers well equipped, and he had a fifty fathom leadline coiled handy. Running to the stern, which was sixty feet nearer the drifting pair, he whirled the lead and cast like a fisherman on the Grand Banks.

Whizz! The slender coils unsnaked themselves in the air.

The lead plumped into the lake, the line falling just across the punt. It was too light to trust, but on board Joe bent the other end of it on to a stouter line, and the boys hauled in until they got that, and then hauled themselves back to the vessel. And did they get a lecture on the silliness of trying to handle an anchor in a boat without oars!

Providence helps those who help themselves and others, and Providence obligingly gave Captain Joe a little on-shore shift of wind, so that all the boys had to do was unload the lumber over the side and let it drift in on the beach, in rafts of its own formation. The wetting did not hurt it. By nightfall the Brothers' hold was clean, the freight was paid, she hove off to the kedge, and the boys sailed back to Toronto with a good breeze but not too strong, and, for December, not too cold.

While working on the beach young Johnny had the opportunity of examining two recent wrecks. The spot was an historic one, for it was near here that the British brig Magnet was run ashore and burned to avoid capture in the War of 1812. Nothing of her remained, but the two others lay like great whales, plain to view.

There is a fascination to a sailor, especially a young one, about a wreck. A hull to which he would not give a second glance, if it were loading or light in active service, becomes a centre of interest and speculation and critical examination when it lies helpless on the beach, with shattered timbers, gaping seams, blistered paint and gaunt spars slanting at unwonted angles and greyed with the weather.

This is not morbid curiosity. He who has eyes to see gains knowledge and wisdom from his survey. Had the wreck been beached end on, he notes, she might have held together, and been released. It was the pounding of the seas on her broadside which ruined her.

And how the staunch white oak has stood up to punishment, where pine has shredded in splinters and brash red oak, already dry-rotted, has fallen away from its fastenings! And how pitiful the homely scrollwork of the waterfront paint-brush embellishing the stern with looped-back curtains and scenery like a stage back-drop, when the whole stern itself has been stove in or washed out.

Or perhaps he sees, in this corpse of a ship, the hidden cause of death, as a surgeon might, examining a skeleton. Here was the crack in the heart of the keel that eluded tallow and stopwaters and let her leak and rot and rot and leak until she had to be run ashore. Or it may be the examiner finds the anchor in which she trusted has the chain cable foul of the stock, or a broken fluke. Or the cause of disaster may not have lain in the ship herself at all, but in the snows and winds of God, the stifling fog, the insidious current, the stupidity of man.

The wreck young Johnny examined was that of Capt. Nixon's schooner J. G. Beard of Toronto, named after this city's mayor of 1854, three years before young Johnny was born. Mayors were larger figures then, perhaps because the city was smaller, perhaps....

Joshua George Beard was one of Toronto's great grain merchants. The Hon. John Beverley Robinson, president of the Council in 1854, the year Mr. Beard was mayor, became mayor himself in 1856, succeeding the Hon. G. W. Allan. The schooner J. G. Beard was built of honest Oakville white oak, by John Simpson in 1856, and measured 236 tons. She was one of a fleet the grain-merchant owned. She had an Indian for a figurehead, and poor Lo still raised his tomahawk in menacing defiance of Niagara's shore when little Johnny Williams paddled around the wreck.

The vessel had been driven on the limestone bottom in a fall snowstorm, at night, in November, 1871. When she went on the American schooner Commodore Foote of Oswego also crashed. The crews of both schooners were rescued.

The approaches to the Niagara River are always dangerous and always will be, for reefs and shoals abound east and west for miles out, and the set of the outpouring river current varies with the wind at the time, and the wind's strength. Moreover the current, which is all the water between Ontario and the head of the lakes, tumbling over Niagara Falls, splits when it reaches this lake. Some goes east and some goes west before circling around in its race to the salt sea.

The Commodore Foote, 256 tons old American register, was a larger vessel than the Beard, and newer, having been built at Oswego by A. Milne for White and Co. of that port in 1862. She had left Port Dalhousie with lumber for Oswego, and her cargo strewed the beach for miles, the fall before the Brothers brought her modest lading. Both wrecks were stripped by J. W. McMillan, grandfather of the present lightkeeper at Niagara, and both remained on the shore for years, the American, known as the "Green Vessel" because of her paint, and the Canadian referred to as "The Wreck," because she was so prominent, and lay opposite the foot of King street of the old town of Newark, as Niagara-on the-Lake was christened. Only two years ago some timbers supposed to be those of the Beard were uncovered by the low water, but they were said to be remains of an old crib. Strange how these old wrecks, only an incident in a boy's adventures in the 1870's rise, up and say, "Yes, that's right," when he mentions them a lifetime later.

Young Johnny Williams learned much that was useful to him in after life while he idled under the Indian's upraised tomahawk in the few moments of leisure hard-working brother Joe allowed. In seventy years of lake faring he himself never lost a ship or a man.

No less a customer of Schooner Days than the Attorney-General of Ontario writes regarding the picture "Loading On the Shore" from Upper Canada sketches, which illustrated some of Capt. Williams' early activities recently—

"Upper Canada Sketches" was written by my father, the late Thomas Conant, who died in 1905. The picture you publish faces page 160 of the volume.

"I am always interested in your articles, "Schooner Days, " and have many recollections of related incidents mentioned by my father. I well recall that about the year 1900 my father and some men and I were digging a rather large hole on the shore of the lake just east of Oshawa harbor for some purpose I do not recall what. During the digging process we came upon innumerable oak chips buried about three feet in the sand and my father then told me that in bygone years schooners had been built on that very location. He gave me the names of some of the schooners at the time but I have forgotten them in the intervening years.

"Your story in last week's issue and the picture "Loading on the Shore" also recalls to mind incidents recounted to me by my father about the loading of ships opposite what is now Oshawa harbor. Many years ago the present Oshawa Creek was a much larger stream, or rather the flow was more uniform throughout the year. This creek flows a short distance west of my residence, where I was born and have always lived, between the centre of Oshawa and the Lake Shore. The first sawmill in the district was built almost straight west of my residence, and the remains in the form of depressed holes are still visible, indicating the outline of the building which stood on posts which once filled these holes. I have heard my father say that that mill cut all the white pine in the district in the early years, and that it was floated down the Oshawa creek out into the lake and loaded on schooner such as the photograph indicates.

"My forefathers were all seafaring men, and I understood from my father that my grandfather and great-grandfather held captain's papers. It will be readily understood, therefore, that I have been greatly interested in your "Schooner Day" articles, which I hope you will continue to write and publish.

...helpless on the beach, with shattered timbers, gaping: seams, blistered paint and spars slanting at unwonted angles and greyed with the weather. 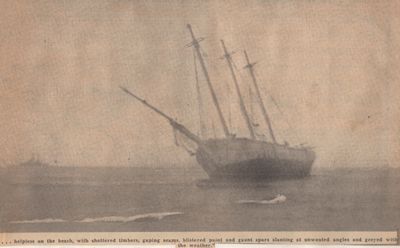